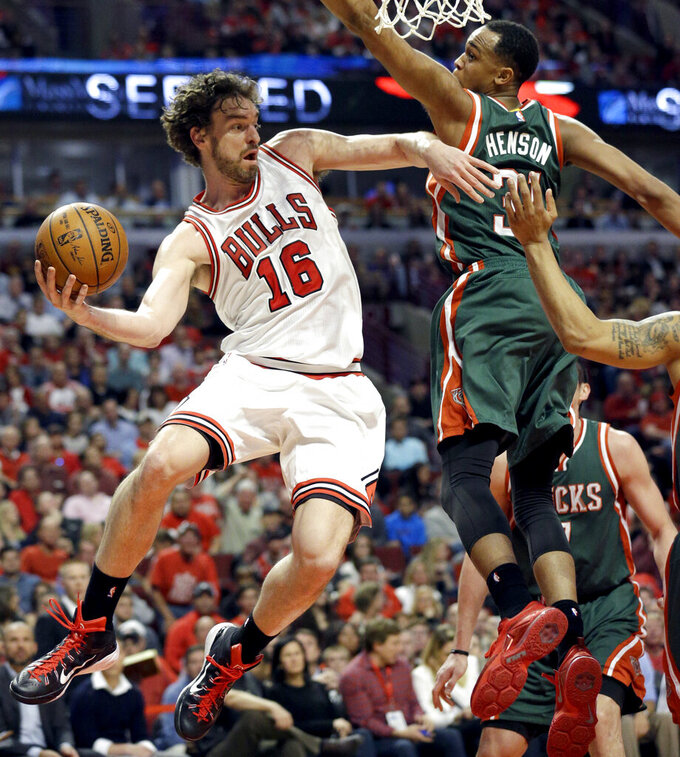 FILE - Chicago Bulls forward Pau Gasol, left, looks to a pass against the Milwaukee Bucks during the second half in Game 1 of the NBA basketball playoffs in Chicago, in this Saturday, April 18, 2015, file photo. Pau Gasol announced his retirement from basketball on Tuesday, Oct. 5, 2021, ending a career that lasted more than two decades and earned him two NBA titles and a world championship gold with Spain's national team. (AP Photo/Nam Y. Huh, File) 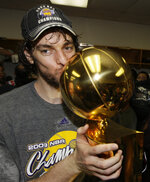 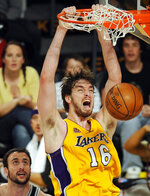 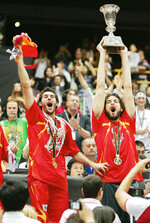 MADRID (AP) — Wishing his “older brother” Kobe Bryant could be there by his side, Pau Gasol finally put an end to a basketball career that went “way beyond my dreams and expectations.”

Gasol announced his retirement from basketball on Tuesday after a career that lasted more than two decades and earned him two NBA titles and a world championship gold with Spain's national team.

“In the end, playing until the age of 41, with everything that I have done, I think that’s not bad," Gasol said. "I’m very pleased and very grateful for having the career that I had and for receiving so much affection and support.”

Gasol had already announced his farewell from international basketball in August after Spain lost to the United States in the quarterfinals of the Tokyo Games, which marked his fifth Olympics.

Gasol had been with Spanish club Barcelona since February. His career had stalled before that because a left-foot injury that lingered and kept him from playing for nearly two years.

“I'm going to retire from professional basketball,” Gasol said. “It’s a difficult decision after so many years, but it's a decision that I really thought over.”

The retirement announcement was made in an event at a opera house in Barcelona attended by former teammates and family members, including his wife, young daughter and younger brother Marc.

Gasol got choked up when mentioning someone who was missing — Bryant, his former Los Angeles Lakers teammate, who died in a helicopter crash last year.

“I really would have liked for him to be here,” Gasol said. "Sometimes life can be very unfair and we miss him and his daughter 'Gigi' a great deal. He taught me how to be a better leader, a better competitor. He showed me what it meant to be a winner. I have always considered him my older brother, so thank you, Kobe.”

Gasol said it was a risk to keep playing because his fractured foot could get worse and he could “only be able to swim and ride a bicycle for the rest of" his life. He said he had "the desire to be more at home, to spend more time doing other things.”

Gasol said he did everything possible to return from the foot injury and was glad to be able to fulfill his dream of playing in front of his daughter.

“It’s been one of the most beautiful periods of my career,” he said. “And to play again with the Spanish national team was something very special. We weren’t able to come away with a medal (at the Tokyo Olympics), but just being able to play was a great success for me.”

Gasol won two NBA titles with the Lakers, in 2009 and 2010, and averaged 17 points and 9.2 rebounds in 1,226 regular-season games with five NBA teams, playing as a center and power forward. His other teams were the Memphis Grizzlies, Chicago Bulls, San Antonio Spurs and Milwaukee Bucks. He was the No. 3 pick in the 2001 NBA draft, being selected by Atlanta and traded to Memphis.

Gasol last played in the NBA with the Bucks in 2019. He signed with the Portland Trail Blazers that year but never got to play.

Gasol recently won an election to represent athletes for the next seven years at the International Olympic Committee. He joined an IOC membership list drawn variously from European and Middle East royal families, international sports bodies, business leaders and 12 athletes elected by their peers.

Gasol said he had been preparing for life after retirement for a while and will start new projects that will include work with his foundation, the IOC and with UNICEF.

He said he may go into consultancy and the executive world, and has already started contacting some NBA teams to discuss ideas.

“I tried to be the best I could, but if you take on that role of being a leader, you have to take on certain responsibilities and that is what I want to do,” Gasol said. “I want to give back to the sport and to society everything they’ve given to me.”