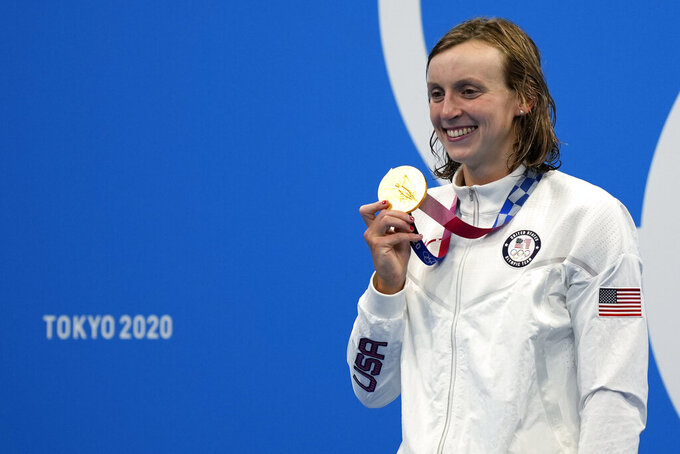 Katie Ledecky of the United States poses with her gold medal after winning the women's 1500-meters freestyle final at the 2020 Summer Olympics, Wednesday, July 28, 2021, in Tokyo, Japan. (AP Photo/Martin Meissner)

TOKYO (AP) — Katie Ledecky will be the first to concede that her standards are almost impossible to meet, especially at this stage of her stellar swimming career.

She always wants to go faster, faster, faster — a singular vision that has carried her to the pinnacle of her sport. Yet it's not really a reasonable goal when you've already done it so many times before.

“It's a real blessing — and a curse,” she said, managing a bit of a chuckle.

In the space of a little more than an hour Wednesday at the Tokyo Aquatics Centre, Ledecky gained the sort of perspective that could serve other Olympians dealing with increasingly weighty expectations that come along once every four years (or five years, in the case of these pandemic-delayed games).

First, she experienced a crushing letdown.

Then, she rallied for an exhilarating triumph.

Neither of which, in the grander scheme of things, define what's really important in life, she was quick to point out.

“I'd much rather people be concerned about people who are really truly struggling,” Ledecky said. “It's true privilege to be at an Olympics — let alone an Olympics in the middle of a pandemic. So many people around the world are going through a lot of hard things. I'm just so lucky to be here.”

At an Olympics where mental health has surged to the forefront, where stars such as Simone Biles and Naomi Osaka have been worn down by the almost unfathomable burden of being better than the last time, Ledecky talked about getting through the most challenging day of her swimming life.

She had already come up short of gold in her opening race — the first time that's happened in her three Olympics. To those on the outside, a silver medal in the 400-meter freestyle seemed like a failure.

Ledecky returned to the pool for a rematch in the 200 free with the swimmer who beat her the first time, the Australian star known as the Terminator, Ariarne Titmus.

Titmus pulled away at the end for another gold, just as she did the first time, only it wasn't Ledecky she had to worry about. The 24-year-old American was seventh at the first flip and never climbed any higher than fifth, which is where she touched at the end.

It was a stunning result for a swimmer hailed as perhaps the greatest female freestyler ever to grace a pool.

But all the disappointment Ledecky was surely feeling had to be cast aside, and quickly. There was another race to come, the longest on her program, the 1,500 free. She has long dominated the metric mile, but if there was ever a moment where she looked beatable, this was it.

Ledecky ran into her coach, Greg Meehan, on the way to warm down.

It also helped to think of her grandparents. As she glided from one end of the practice pool to the other, hidden a bit from the world, her thoughts turned to four people — two of them still living — who have been a guiding force in her life.

“I was trying to find some positive things to get me moving forward,” Ledecky said. “I really love them all and it makes me really happy to think about them. They're four of the toughest people I know. I knew if I was thinking about them during the race, I wasn't going to die” — swimming slang for tiring out at the end — “and I wasn't going to have a bad race.”

It wasn't Ledecky's best performance. Her time — 15 minutes, 37.34 seconds — was nearly 17 seconds off the world record she set three summers ago.

But she touched ahead of everyone else to claim the gold, about 4 seconds better than hard-charging teammate Erica Sullivan.

When Ledecky saw the “1” beside her name, she wasn't so concerned about the time that went along with it. Maybe for the first time in her entire career, she wasn't consumed with being better than she was the last time.

She could see the value of being good enough.

“I'm always striving to be my best, to be better than I have been,” Ledecky said. “But it's not easy when your times are world records in some events. You can't just keep dropping time every single swim.”

Ledecky let out an uncharacteristic scream toward the American cheering section in the mostly empty arena. She bounded over the lane rope to hug the silver medalist. And then, with her lips quivering and the tears welling up, she pulled the goggles back down over her eyes.

“She’s such a bad chick, such a cool human being,” Sullivan gushed. “She’s a legend and she’ll forever be a legend.”

Ledecky had earned the sixth gold medal of her career.

It's probably fair to say none meant more than this one.

“I've really learned a lot over the years," she said. “The times might not be my best times, but I'm still really happy that I have a gold medal around my neck right now.”

She thought of those she's met along the way. The children hospitalized with grave illnesses. The soldiers who've suffered horrific injuries in battle.

That word came up again.

“How their eyes light up when they see the gold medal,” she said, her voice choked with emotion. “That means more to me than anything, that ability to put a smile on their faces. I just really wanted to get a gold medal to have that opportunity again.”