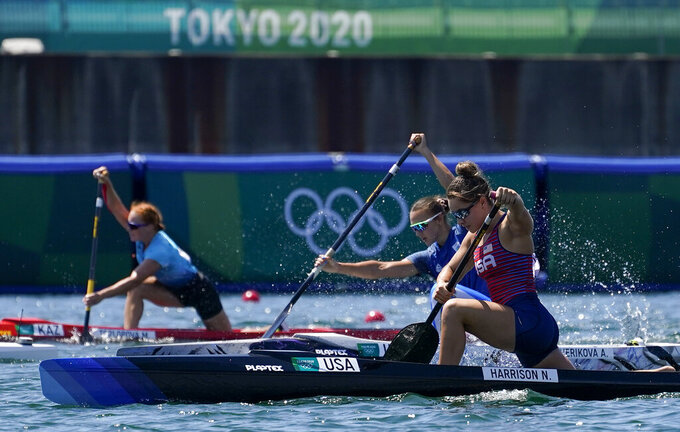 TOKYO (AP) — The women's canoe sprint 200 is making its Olympic debut on Wednesday with optimism about gender equity in the sport, and a nagging sense of skepticism about how one gold medal favorite got to Tokyo.

Laurence Vincent LaPointe of Canada, who dominated the event at the international level for nearly a decade, needed an embarrassing 2019 doping suspension overturned, and some maneuvering through the entry rules by Canadian Olympic officials to get to the Olympics.

But she's here now, and eyeing a likely showdown with American teenager Nevin Harrison, who was only 17 when she won the 2019 world championship with the Canadian was suspended.

Both cruised through their opening heats Wednesday to advance to Thursday's semifinals. The women's 200 is being raced at the Olympics for the first time in a push for gender equity.

“There are some people who are frustrated or so focused on themselves ... Most of them seem to be fine," Vincent Lapointe said of her presence at the Sea Forest Waterway. “But you know what? I proved that I could be here. I did everything in the last two years to make it here, and I think I deserve to be here. If someone is still mad, there's nothing I can do.”

The Canadian has been the standard-bearer in the women's canoe since 2010 when it became a world championship event. She won six world titles and seemed a lock for the first Olympic gold medal until a 2019 doping test found traces of the banned steroid ligandrol, which is used to repair and build muscle.

Vincent Lapointe and her lawyers went to work appealing the doping suspension that could have been as long as four years. A hair sample taken from an ex-boyfriend and a supplement product sample showed he had ingested ligandrol at about the time it could have affected her doping test.

That evidence helped Vincent Lapointe convince an International Canoe Federation that she had been contaminated through her ex-boyfriend's body fluid.

Vincent Lapointe was reinstated in early 2020, but that wasn't enough to get her to the Games. Sidelined from competition by suspension and then the coronavirus pandemic, she was beaten by teammate Katie Vincent in the Canadian Olympic trials.

But winning medals is what counts at the Olympics and Canadian officials weren't going to leave one of their best hopes for gold at home.

Canada entered Lapointe in a kayak event she had never raced before, then used a provision in the rules that allowed her two switch to the canoe 200. Switching paddlers among kayak and canoe events happens regularly, but switching them between boat styles, where the stroke is entirely different, is rare.

It was a manipulation of the rules, but a legal one. And one of canoe's greatest racers is back on the water for biggest day in the event's history.

“It’s been crazy, there’s been moments when I could have thought I wouldn’t make,” Vincent Lapointe said.

The switch also allows Vincent Lapointe to team with Katie Vincent in the doubles 500, where they are gold medal favorites.

Katie Vincent, a medal contender in her own right in the singles race, insists she's happy about the levers pulled to get her teammate and rival into the 200.

“We're both very honored and proud to be here, extremely grateful, given all the turbulence along the way," she said.

Harrison and Vincent Lapointe have never raced each other. The American ripped through her only preliminary race on Wednesday in 44.938 seconds, the fastest time of the day and 0.47 seconds quicker than Vincent Lapointe.

“I know we didn't think she was going to be here until a few weeks ago. It was strange to find that out. I know it can be frustrating to some girls," Harrison said. “But, I'm here to race, beat who I have to ... I'm sure Laurence and I are going to put up a strong fight.”

Harrison declined to comment on Vincent Lapointe's path to the boat decks of the Sea Forest Waterway.

“The Olympic process is always a complicated one,” Harrison said. “I'll leave it at that.”