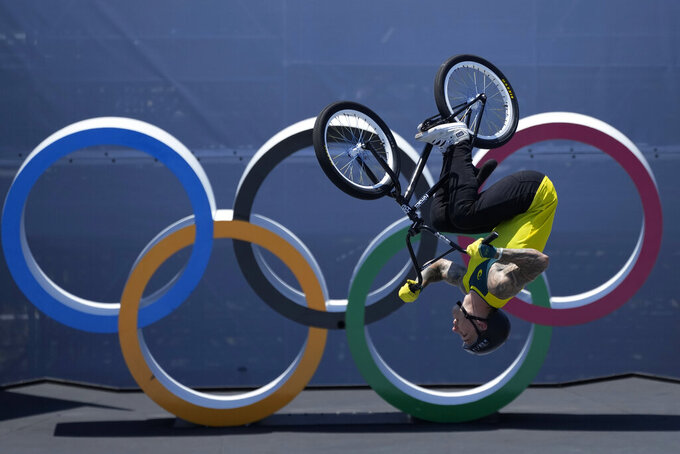 BMX freestyle put on an audacious aerial show in its Olympic debut, bursting onto the worldwide stage with a Sunday of soaring at the Tokyo Games.

Charlotte Worthington of Britain earned gold and Australian Logan Martin capped a showcase more than 20 years in the making.

“It's good for people to see us in the Olympics because people will see we are a real sport and it will open a lot of doors,” said silver medalist Daniel Dhers of Venezuela. “And it's good for the Olympics. It gives them a younger generation, a younger crowd. We do what we want to do, we're still a little bit rebel and I think the Olympics needed that.”

The riders electrified the handful of people in the stands at Ariake Urban Sports Park with a can-you-top-this series of flips, twists and handlebar turns.

Fans standing two- and three-deep on a nearby bridge enjoyed the show, watching soaring bikes through the air at a distance.

And it had to be a hit on TV sets around the world. It shredded too much not to.

When it was over, two riders stood atop the podium after rides no one else could match. Worthington kicked it off by taking down gold medal favorite Hannah Roberts.

The 25-year-old former chef from Manchester landed the first 360 backflip in women's competition and added a front flip to post a second-run 97.5 after crashing on her first.

Roberts, a three-time world champion at 19, looked hard to beat after landing a backflip with a tailspin for a 96.1 in her opening run. The top seed had a chance to surpass the Brit, but she landed hard off an early jump to tweak a foot injury from earlier in the week and waved off the rest of her second run.

Nikita Ducarroz of Switzerland took bronze with an 89.2 in her second run.

“It was tough to get back up there after falling on my first run,” Worthington said. “You start to think: ‘Oh, what if this isn’t it? What if I’ve not got it?' But you’ve got to just keep telling yourself that you do."

She did — and so did Martin.

The 27-year-old reigning world champion kept the attention of fans on the bridge and the handful of people inside the park, pulling off a near flawless first run for a 93.3 — despite holding back some of his tricks.

Martin watched as the other eight riders tried to catch him and pumped his fist from atop a landing when no one could. He went on a victory lap, flipping his bike in the air and catching it on an early jump, but waved the rest of it off after landing hard on another jump.

Dhers had a 92.05 on his second run to secure silver and Declan Brooks of Britain had a second-run 90.8 to earn bronze.

“My first run was actually a safety run,” Martin said. “I wanted to land a run I knew I could deliver, make it clean, keep it consistent and that really paid off. I had more to do in my second run, but I obviously didn’t need to do it.”

BMX freestyle’s rim-wrecking roots were planted in the flying action-sports carnival of the X Games in the 1990s, and later in offshoots like the Dew Tour and Gravity Games.

BMX racing, freestyle’s cousin, has been in the Olympics since the 2008 Beijing Games. Following the pedal prints of innovative riders like Dave Mirra, Mat Hoffman and Ryan Nyquist, new generations of riders propelled BMX freestyle's popularity until it had to be included, too.

Freestyle took a huge leap forward — with a twist, of course — when it came under the umbrella of the Union Cycliste International in 2016, further legitimizing the sport and giving the top riders a place to compete on a World Cup circuit.

The first BMX freestyle championships were held in 2017 — won by Roberts and Martin — and the sport was added to the Olympic program later that year with surfing, sport climbing, 3-on-3 basketball, skateboarding and karate.

BMX freestyle, also known as BMX park, certainly has the eye appeal to be a big hit with riders flipping, twisting and spinning their handlebars on a course that’s like an oversized skate park.

The vernacular is pretty rad, too, with ordinary words and phrases that mean something different in the park: superman, truck driver, toboggan.

Martin has been the standard in men’s BMX freestyle, winning in the 2021 world championship and the X Games twice, with two runner-up finishes.

Roberts has dominated the sport at a young age, winning three of the first four world championships and three World Cup titles — she won everything in 2019 — by the time she turned 19.

Martin lived up to his billing as the favorite in Tokyo. Roberts pulled off a stellar run yet was topped by an even better one.

"I'm over the moon," Worthington said.

So is the sport.