At 34, 'Mommy Rocket' Fraser-Pryce sprinter to beat in Tokyo 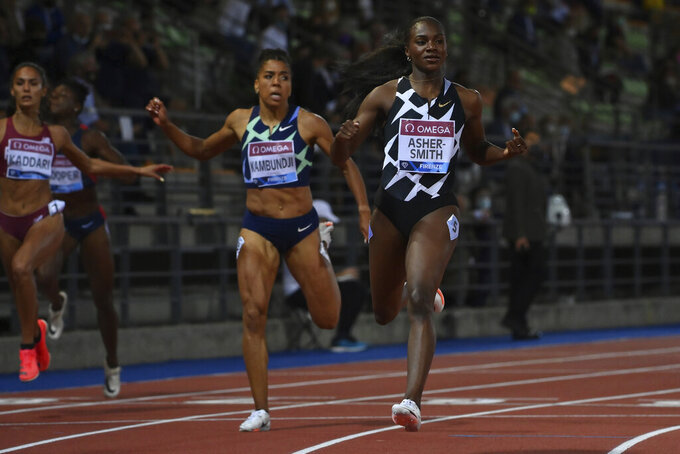 Every time Shelly-Ann Fraser-Pryce steps on the track, some sort of record is in jeopardy.

At the top of that list, of course, is Florence Griffith Joyner's 33-year-old mark in the 100 meters.

At the upcoming Olympics, Fraser-Pryce, the 34-year-old mother from Jamaica, also could become the oldest person to win an individual Olympic sprint. And, she could become the first woman to win three 100-meter gold medals at the Games.

Not bad for an athlete who feared her career was over four years ago when she became pregnant, but who rebounded to win the world championship in 2019.

“Commitment is everything — today’s failure prepares you for tomorrow’s success,” Fraser-Pryce tweeted recently. “There’s no failure in progress, so keep going and push through.”

Where the world used to look to another Jamaican, Usain Bolt, to rewrite history at the Olympics, Bolt's retirement turns the spotlight over to Fraser-Pryce, who is now the most-accomplished active 100-meter sprinter in the world. The chances for the “Pocket Rocket,” who now calls herself the “Mommy Rocket,” to put her name in the history book starts July 30 in Tokyo. Those chances increased dramatically earlier this month when the runner considered her main threat, American Sha'Carri Richardson, was banned for a positive test for marijuana.

Even without Richardson in the race, the sprints still have star power. Dina Asher-Smith, the British speedster who won 200-meter gold and 100-meter silver at the 2019 world championships, will be in the lineup, along with Shericka Jackson of Jamaica, who is now on the short list of women to run sub-11 seconds in the 100, sub-22 in the 200 and sub-50 in the 400.

And then, there’s defending Olympic champion Elaine Thompson Herah, the 29-year-old from Jamaica who, in Rio, recorded the first women’s 100-200 sweep since FloJo in 1988. She qualified for both races this time, too.

Fraser-Pryce will also be a factor in the 200, which she also won at Jamaica's recent Olympic qualifier; she has a 2012 Olympic silver medal at that distance, as well. That race is also expected to include Asher-Smith; Shaunae Miller-Uibo of the Bahamas, who, because of the Olympic schedule, has to choose between the 200 and 400, and has indicated she wants the 200; and American Gabby Thomas, who ran 21.61 at Olympic trials to become the second-fastest woman in history at the distance, behind only Griffith Joyner.

“Now I’m just going to have to map out a different trajectory for my life,” Thomas said.

On June 5, it was Fraser-Pryce who became the second-fastest woman in history in the 100 — her time of 10.63 declared to the world that she was, indeed, ready for the push to Tokyo.

"Honestly no… I never expected I would run 10.6 and think it’s a good thing because there was no pressure,” Fraser-Pryce said when she posted the time.

Bolt’s bet for the 100? Trayvon Bromell, who won the U.S. track trials after overcoming issues with his Achilles that nearly ended his career.

A 17-year-old named Erriyon Knighton is already is breaking Bolt’s under-20 records in the 200. Knighton figures to give world champion Noah Lyles a run for his money in the event.

Knighton counts Bolt and Lyles as his biggest on-track inspirations.

“Coming from my generation, I don’t know many,” Knighton said.

For the moment, the women’s 400-meter hurdles world record stands at 51.90 seconds and belongs to 21-year-old Sydney McLaughlin.

Heavy emphasis on “for the moment.”

McLaughlin set the mark at U.S. trials when she edged Dalilah Muhammad to earn the victory. McLaughlin’s time was good enough to better Muhammad’s old world record by 0.26.

In the men’s version, Karsten Warholm of Norway will be the one to catch. The two-time world champion broke the world record last Thursday. He finished in 46.70 seconds to eclipse the mark of 46.78 set by American Kevin Young in the 1992 Barcelona Olympics final. The world record could fall again in Tokyo with Warholm, Abderrahman Samba, who represents Qatar, and Rai Benjamin of the U.S. all pushing each other.

Because of the expected extreme heat, the marathon and race walks have been moved from Tokyo to Sapporo. The races will be held at Sapporo Odori Park in Hokkaido, beginning Aug. 5 (men’s 20-kilometer) and culminating on Aug. 8 with the men’s marathon.

Three-time high jump world champion Mariya Lasitskene will be a favorite after Russia named her to its 10-person athletics team. The team is limited because of sanctions stemming from Russia's state-sponsored doping scandal.

Russia will compete under the acronym “ROC” — for Russian Olympic Committee — in Tokyo. The Court of Arbitration for Sport eased some sanctions against the country after findings that Russia had manipulated data from its anti-doping laboratory that would have helped pursue some cases.

But World Athletics has been more stringent than most international sports federations in its sanctions against Russia, which is why only 10 athletes are allowed in track and field.