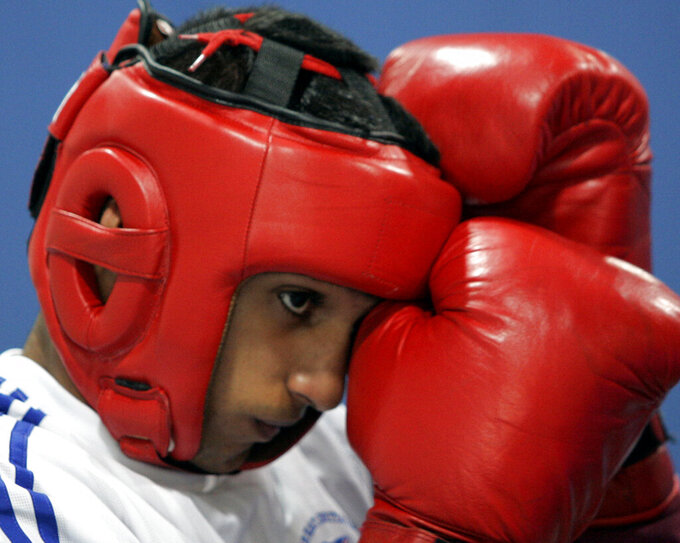 The feud was born in a pre-Olympic sparring session 18 years ago, when two feisty amateurs were starting out their boxing careers.

It will be settled on Saturday, with one of the former world champions maybe getting punched all the way into retirement.

No world titles will be on the line when Amir Khan and Kell Brook meet for an all-British fight at Manchester Arena that was sold out in 10 minutes. Those days appear long gone.

Instead, this long-awaited grudge match is about settling an old score. Scratching a big itch. Maybe securing one last big payday for two fighters on the way down from the top of boxing.

The enmity between the two 35-year-olds born six months and about 60 miles (100 kilometers) apart in northern England is real and long-lasting. Their fight — at a mutually agreed 149-pound catchweight — has come a few years too late, but British boxing fans are just happy it’s happening at all.

In 2004, Khan and Brook were at an England Boxing training camp, with both looking to get into Britain’s squad for the Olympic Games in Athens. Khan eventually made it there, winning a silver medal, and can remember what he called “great sparring sessions” that — in his words — saw him “school Kell in the ring.”

“He hates me because I gave him a beating,” said Khan, who claimed he was told to only use one hand and to “take it easy” on Brook. “That has stuck with him. Now he envies my career and wonders why he couldn’t have done what I did.”

“I think Kell’s always been very obsessed with my career,” he said at the final pre-fight news conference. "He's been like a fan-boy and I’ve been living in his head for such a long time that I think it’s come to the stage where he’ll say, 'Amir, you need to start paying me some rent.’”

Khan (34-5, 21 KOs) is the more famous of the two, in Britain owing to his Olympic silver medal and in boxing worldwide for being the unified light-welterweight champion from 2009-12 who later fought — and lost to — big names like Canelo Alvarez, Danny Garcia and Terence Crawford in the United States.

Brook (39-3, 27 KOs) has fought mostly in Britain though earned the biggest victory of his career in California by beating Shawn Porter in 2014 to become IBF welterweight champion until his brutal loss to Gennady Golovkin in London two years later.

In one of just two fights since 2018, Brook was knocked out by Crawford in November 2020 and has questioned in the buildup to the Khan fight if he would really want to continue in boxing.

“It’s a fight I’ve always wanted, it will cement my legacy in this game,” Brook said. “I have done it all, apart from this grudge match.”

For Brook, it’s about gaining the respect he feels he has never had from Khan, and maybe others, for climbing boxing’s ladder “the hard way.”

A fight in 2017 never materialized because Khan reportedly demanded a 70-30 purse split in his favor.

“Wherever I've walked, the first question from boxing fans has been, ‘When are you fighting Amir Khan?'" Brook said Thursday. “It’s always been there. Always been niggling me that we've never fought. So it's not been hard for me to train for this fight. It's been dead easy.”

Having been in the ring with both Britons, Crawford is perhaps a good judge of who might prevail and the undefeated WBO welterweight champion reckons Khan has the edge. Part of Khan’s training camp has been spent in Nebraska with Crawford.

“I witnessed how hard he trained, how he sparred, how he progressed and I see the hunger in his eyes,” Crawford has said.

Khan’s last fight was even longer ago, in July 2019, and he and his family have since been the subject of a reality TV show on the BBC called “Meet the Khans: Big in Bolton.” In 2017, he was a contestant in another reality show, “I’m a Celebrity…Get Me Out of Here!”

He still feels there is life in his career yet.

Steve Douglas is at https://twitter.com/sdouglas80