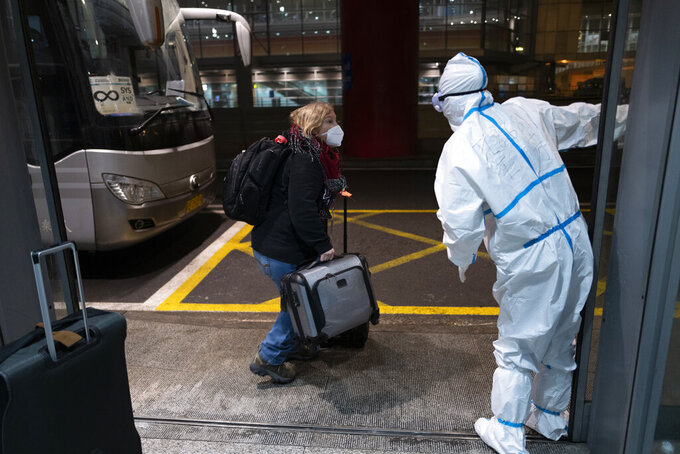 FILE - A passenger is directed to a bus by an Olympic worker wearing protective gear at the Beijing Capital International Airport ahead of the 2022 Winter Olympics in Beijing, Jan. 24, 2022. (AP Photo/Jae C. Hong, File)

BEIJING (AP) — Officially, the Beijing Olympics are taking place inside what organizers are calling “the enclosed compound activity area.”

That’s a fancy way of saying “a closed loop.”

You probably know it better as “the bubble.”

And bubbles are now part of the norm at major sporting events.

The premise of this bubble is simple: Keep those who passed multiple tests just to get access to the Olympics in, keep the rest of the world — and, hopefully, COVID-19 — out. It has worked for the National Basketball Association, the National Hockey League, Major League Baseball, Grand Slam tennis events, college sports, the rescheduled Tokyo Olympics that took place last summer and so much more.

Everyone inside the bubble is, in theory, virus-free when they get in and figure to have a chance to stay that way if the strict rules are followed. For a few, it hasn’t gone to plan. Their Olympics ended before they could begin after a positive test. For most, it is working.

And for everyone, it is daunting.

“Everyone’s road to Beijing has been anything but ordinary,” U.S. speedskater Brittany Bowe said.

The road after they get to Beijing is anything but ordinary as well.

The venues are open to members of the Olympic family, while the rest of Beijing is basically closed. The Forbidden City is, well, forbidden. The Great Wall is sometimes seen but cannot be climbed. The arrivals section of the usually bustling Beijing Capital International Airport was a ghost town, sans for those in full protective equipment tasked with administering coronavirus tests and directing visitors to the proper bus.

Olympic hotels are surrounded by fences; police and guards are the only ones that open and close the gates for buses and other approved vehicles. When media centers at each venue close for the day, surfaces are sprayed with disinfectant and tested for the presence of virus There’s no going for a walk around town, no shopping expeditions, no visits to local restaurants. And in case anyone forgets where they are and what the rules are, there are massive signs at just about every imaginable exit: “Please Stay Within The Enclosed Compound Activity Area."

“It’s Olympics without friends and family, which is the hardest part,” USA Luge slider Emily Sweeney said. “I was talking with one of the Latvians and saying, ‘We’re going a little crazy in the head because of COVID,’ but we both agreed, it’s just so important right now. I’ll be able to take a breath afterward. It’s a bubble ... but the term ‘bubble’ and the fact that we’re always being tested just keeps me on alert.”

An Italian luge athlete, Kevin Fischnaller, tested positive two days before he was to compete at the Olympics and was removed from the village; his cousin, Dominik Fischnaller, wound up winning a bronze medal. U.S. bobsledder Elana Meyers Taylor missed unofficial training last week — and a chance to carry the American flag into the opening ceremony — because she was in isolation following a positive test; she’s now cleared and plans to be able to compete in her two events.

“I’m still scared to take off my mask,” U.S. curler Vicky Persinger said. “I’ve had the fear ingrained in me for several months now. But everything is so safe here. They’ve done a great job with all the testing.”

It is a daily requirement — sometimes more. Some members of the Olympic family were told on Sunday that if they had recently visited one of the alpine skiing venues, they would need a second PCR test that day instead of just one. The bubble, despite the efforts of most everyone in it, is not airtight.

Double Olympic champion Simen Hegstad Kruger of Norway, one of the best cross-country skiers in the world, was unable to defend his title in the 30-kilometer skiathlon earlier this week. He tested positive before even coming to China, meaning he couldn't even get into the bubble.

“The games should be the pinnacle of the sport, and you should have all the best athletes here in their top form,” British skier Andrew Musgrave said. “If you become an Olympic champion, you want it to be because you’re a worthy champion, not because your competitors aren’t here."

Most Olympians will be in the bubble for no more than a couple weeks. They will not even come close to a record for bubble longevity.

When the Los Angeles Lakers and Miami Heat advanced to the 2020 NBA Finals at that league’s restart bubble at Walt Disney World near Orlando, Florida, they both logged more than 90 days separated from the outside world. No fans, no family, just FaceTime and multiple Amazon deliveries a day (some players bought everything from furniture to wine refrigerators for their NBA bubble stay, most of those purchases being left behind).

Much like this bubble, masks and testing were the rule inside the NBA's bubble. But this Olympic bubble has taken safety to a higher level than even the NBA did, especially given China's zero-tolerance policy for positive tests.

“Very challenging and difficult,” Lakers star LeBron James said of his time in the bubble. “It played with your mind. It played with your body. You’re away from some of the things that you’re so accustomed to, to make you be the professional that you are.”

He persevered and held a gold trophy aloft when his bubble stay was over.

Here, those who handle it best will hoist gold medals.

“This is a really challenging thing that we’re choosing to do,” Sweeney said. “I would say going to Beijing and getting a little glimpse of the culture, but not really being able to experience on any of it, that’s just sad. It’s sad to know that we’re having Olympics in a place that could be really cool to see a completely different culture ... and we can’t see it.

“But is it worth it? Absolutely.”