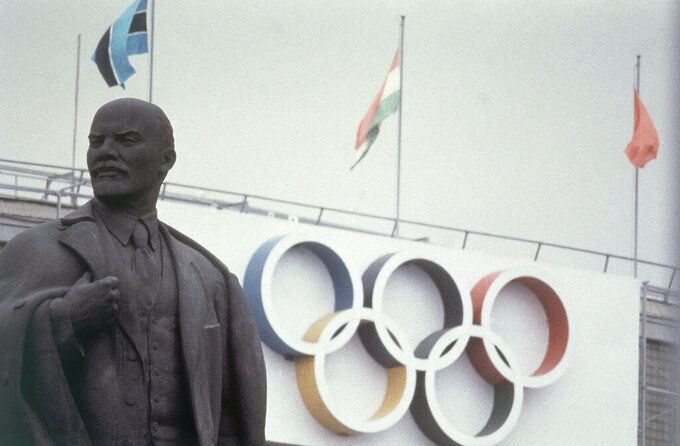 FILE - Lenin Stadium, the main stadium for the 1980 Moscow Summer Olympic Games and a Lenin statue are shown in this July, 1980 file photo. Just to hear chatter in the nation’s capital about a possible boycott of the Winter Olympics in China had to be enough to alarm athletes already deep in preparation for the games. The United States and 65 other countries boycotted the Moscow Olympics. (AP Photo/File)

It may have been a slip of the tongue, or perhaps a bit of miscommunication in a new administration.

That’s little consolation to hundreds of potential Olympians around the country. Just to hear chatter in the nation’s capital about a possible boycott of the Winter Olympics in China had to be enough to alarm athletes already deep in preparation for the games.

Thankfully, there doesn’t seem to be any groundswell of support for the idea of boycotting the games, which are scheduled to take place just 10 months from now. The U.S. State Department suggested earlier this month that an Olympic boycott was among the possibilities because of human rights issues in China, but a senior official said later that keeping the U.S. team home has not been discussed.

“For an Olympic athlete, a boycott is an absolute tragedy,’’ track great Edwin Moses said. “We only get that one shot every four years.’’

Moses hasn’t run in an Olympics since 1988, though he’s got a unique insight into boycotts. When he was dominating the 400-meter hurdles for the better part of two decades he seemed to run into one every time he set his sights on the Olympics.

The boycott in 1988 in Seoul was so small he struggled to remember the nations involved. The one in Moscow eight years earlier was so big that it almost surely cost him a gold medal.

Moses still managed to win gold medals in Montreal in 1976 and Los Angeles in 1984. But even the greatest hurdler ever couldn’t win when he wasn’t allowed to run.

“We couldn’t even watch the Moscow Olympics because they weren’t televised,’’ Moses said in a phone interview with The Associated Press. “I took a midsummer beak, went to California, and laid on the beach.’’

It was probably best that Moses didn’t watch. His stomach might have turned had he seen the 400-meter hurdles gold won in 48.70, more than a second slower than the winning time he ran in 1976.

Two weeks before the 1980 games he broke his own world record in a meet in Milan, winning so easily that the other hurdlers are barely in the picture after he cleared the last hurdle.

Moses was lucky in some respects because he was so good for so long that his career spanned four different Olympics. He missed just one, the 1980 games in Moscow, after President Jimmy Carter ordered the U.S. team to boycott because the Soviet Union had invaded Afghanistan.

A lot of his potential teammates for Moscow weren’t as fortunate. Many lost their only chance for Olympic glory when the games became caught up in cold war politics. Two out of every three never got a chance to compete in an Olympics again.

Thankfully, boycotts haven’t been a part of the Olympic discussion for more than three decades now. The last one was in 1988, when North Korea and Cuba skipped the games in Seoul, a mini-boycott that did little except cost Cuba some potential gold medals in boxing and track and field.

Before that, though, were two Olympics forever tarnished by the countries who decided to stay away.

Moses delivered the athlete’s pledge in Los Angeles, then went on to win gold in his specialty. That was hardly unexpected, since Moses won gold in 1976 and won 122 straight races between 1977 and 1987. He set the world record four different times in the 400.

Still, there’s a void when he looks back on his career because of the one gold he wasn’t allowed to chase.

“There are athletes with more medals than me because I wasn’t able to compete in multiple events,’’ said Moses, who is now 65 and living in Atlanta. “But I could have been the only guy at the time to win three golds in one event, maybe four if I hadn’t had a bad day at the office in Seoul.’’

Last year, on the 40th anniversary of the boycott, Sarah Hirshland, the head of the U.S. Olympic and Paralympic Committee, penned a letter to the 1980 Olympic hopefuls that said no athlete should be denied the chance to compete in Olympics because of world politics. And Walter Mondale, who was vice president at the time, also offered an apology of sorts to those who had their dreams taken away.

“I think we did the right thing,” Mondale told The Wall Street Journal last year. “But I’m sorry about how it hurt them.”

Moses is sorry, too, and not just for himself. He can only hope that, despite rumblings of a possible Beijing boycott, the lessons of four decades ago have been learned.

“It doesn’t work and hopefully the politicians will keep their hands off of it,’’ he said. "It only hurts athletes and there are other things you can do other than a boycott. It has nothing to do with sports, nor should it.’’