Kerley slows down with cramp, out of 200 meters at worlds 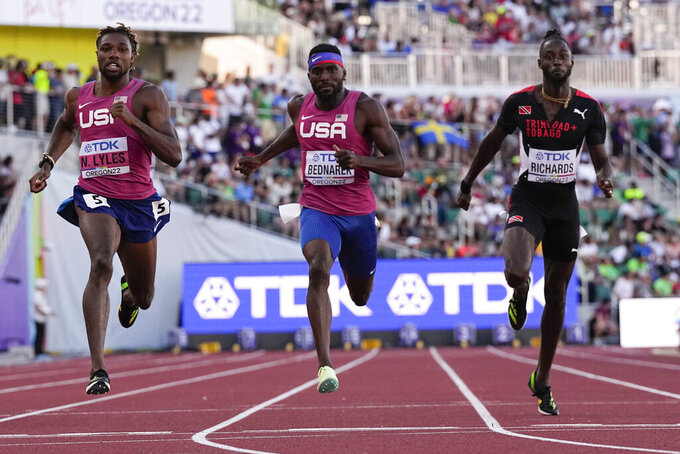 Noah Lyles, of the United States, wins a heat during the men's 200-meter semifinal run at the World Athletics Championships on Tuesday, July 19, 2022, in Eugene, Ore. (AP Photo/Ashley Landis)

EUGENE, Ore. (AP) — World 100-meter champ Fred Kerley will not have a chance at two individual medals at the world championships after he slowed down midway through his 200-meter semifinal due to a cramp and finished sixth.

The American, once a 400-meter specialist who moved down in distance before last year’s Olympics, was holding his left hamstring Tuesday night after he crossed the finish line.

Kerley won the 100 in 9.86 seconds and was expected to lead the Americans in the 4x100 relay this weekend. He hasn't been ruled out.

His departure opens a less-challenging path for Noah Lyles, the defending world champion, 18-year-old Erriyon Knighton, and top-ranked Kenny Bednarek, all of whom advanced. The trio had the top three times, led by Lyles at 19.62 seconds.

The Jamaican women are poised for another sprint sweep after qualifying three for the final in the 200. Shelly-Ann Fraser-Pryce, Shericka Jackson and Elaine Thompson-Herah — the finishing order of the 100 — all advanced. Jackson had the fastest time at 21.67.

It was an easy night at the track for the medal favorites in the women’s 400 hurdles. Olympic champion and world-record holder Sydney McLaughlin, defending world champion Dalilah Muhammad and Olympic bronze medalist Femke Bol of the Netherlands easily won their first-round heats.

“This event has become one of the main focuses for the last couple of years,” Muhammad said. “It could be any one of our days. So we’ll just see how it goes.”