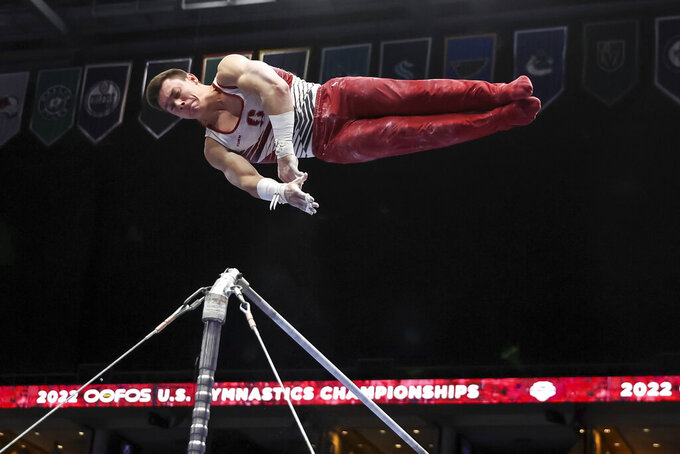 TAMPA, Fla. (AP) — Brody Malone cruised to his second national gymnastics title on Saturday night to cement his status atop the American men's program with the Paris Olympics less than two years away.

The 22-year-old Malone posted a two-day total of 176.950, more than five points ahead of longtime national team member Donnell Whittenburg in second and teenager Asher Hong in third.

An Olympian for the first time last summer and a bronze medalist on the high bar at the world championships last fall, Malone has quickly grown comfortable as the standard-bearer for the U.S. men, a mantle he accepted following three-time Olympian Sam Mikulak's retirement after the Tokyo Games.

“It was never my intention to come in and take over Sam’s spot,” Malone said. “It just kind of happened. I don’t want (the pressure of that) to affect how I approach my gymnastics.”

Malone wasn't quite as crisp on Saturday night as he was on Thursday when he took a massive lead on the rest of the field, but it hardly mattered.

Spectacular on high bar — even with a minor error — and steady and efficient everywhere else, Malone competes with an unruffled poise. At times it's difficult to tell whether he's in the middle of a major meet or just riffing at the end of practice.

“He’s a fighter,” McClure said. “He's one of those guys where even if you’re five points ahead, it’s not good enough."

Malone's triumph automatically earned him a spot on the 2022 world championship team. He'll be joined in Liverpool, England, this fall by a resurgent Whittenburg.

The 28-year-old, a four-time world championship team member but never an Olympian, considered retirement at the end of 2021. He ultimately decided to press on, saying his body was too healthy for him to move on to the next chapter of his life.

Buoyed a bit by a bonus system designed to reward gymnasts for attempting more difficult elements, the powerfully built Whittenburg posted the top score on still rings and took second on vault.

He still seemed destined to have to sweat out the world championship team selection camp in October until Hong saw a largely brilliant meet end with a sloppy set on high bar that dropped him from second to third, allowing Whittenburg to exhale for once and not wait out a selection process that hasn't always gone his way.

Whittenburg's trip to England hardly seemed possible a year ago. Several factors played a role in his decision to keep going. Back home in Baltimore over the winter, the advice of his mother Sheila kept coming back to him.

“My mom says, ‘You know, as long as you can keep going, you might as well, because as soon as you’re done, you’re done,” Whittenburg said.

He's not. And Paris remains very much on the table.

While Whittenburg is nearing the sunset of his elite career, Hong's is just beginning.

The 18-year-old, who will join Malone at Stanford when classes begin in late September, still provided a compelling case that he should join his soon-to-be teammate in England too. Hong took first on vault, second on floor and third on rings.

Hong's coach Tom Meadows chalked Hong's shaky high bar set to a mix of nerves and exhaustion, a learning experience for a young gymnast in his first senior national meet.

“At the end of the (high bar) routine, he just couldn’t get his body around, gassed out,” Meadows said. “And, you know, that’s experience. That’s experience, that’s youth. So he’s got to go back in the gym and we’ll have to learn from it and move forward.”