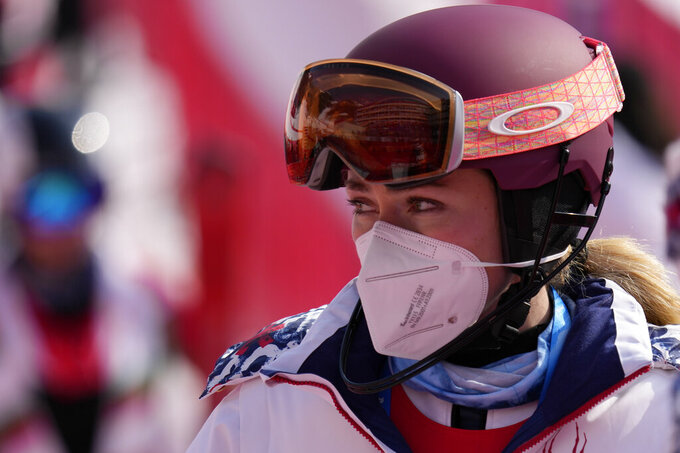 Mikaela Shiffrin, of the United States leaves the finish area after she skied out in the first run of the women's slalom at the 2022 Winter Olympics, Wednesday, Feb. 9, 2022, in the Yanqing district of Beijing. (AP Photo/Luca Bruno)

NEW YORK (AP) — NBC offered a full-throated defense of how it covered skier Mikaela Shiffrin's shocking Olympics flameout, to the point of suggesting there's sexism involved in criticism that it was cruel in its portrayal of her emotional response.

NBC's cameras focused on Shiffrin for much of the time as she sat forlornly on the course, head bowed, for more than 20 minutes. The network aired a raw interview where she fought off tears and said she's second-guessing everything she's done for 15 years.

For the second straight Olympics, the emotional health of athletes performing on the biggest stage has become a focus of discussion. The experiences of gymnast Simone Biles and tennis player Naomi Osaka last summer were fresh in the mind of NBC's critics, and the online blowback was fierce.

As one response on Twitter put it: “Show some empathy.” NBC, said another, was “shaming” Shiffrin — “torturing” her. “The relentless hype machine," one critic wrote, “has claimed another victim.”

“We have an obligation in that moment, as the broadcaster of the Olympic games, to cover the moment,” Solomon said in an interview with The Associated Press on Wednesday evening. “There's no script when there's a wipeout on the slopes or a fall in figure skating. We're watching real people with real emotions in real time and we did everything we were supposed to do.”

Shiffrin's performance was huge news, she said — the biggest story of the Games so far.

“I've thought a lot about this, and if Joe Burrow or Matthew Stafford sit on the sidelines 22 minutes after the Super Bowl on Sunday, you can bet the cameras are going to stay on them,” Solomon said.

“Here we are in 2022 and we have a double standard in coverage of women's sports,” she said. “Women's sports should be analyzed through the same lens as the men. The most famous skier in the world did not finish her two best events. So we are going to show her sitting on the hill and analyze what went wrong. You bet we are.”

As much as fans enjoy reveling in triumph, disappointment in sport — or any endeavor — is often the more compelling story. “More people relate to heartbreak than anything else,” ESPN’s Tony Kornheiser said on “Pardon the Interruption” on Wednesday.

It was evident in an interview Shiffrin gave to NBC after she spun out in her first Olympics race how much it was weighing on her. She apologized to viewers: “I'm sorry that that was the performance that I did today,” she said.

She was second-guessing, she said, “the last 15 years, everything that I thought I knew about my own skiing and slalom and racing methods.”

At the same time, critics were second-guessing NBC's role in the pressure placed on Shiffrin, who was anointed as one of the presumed stars before the Games even started. In a segment broadcast before her second race, former ski racer and now NBC analyst Lindsey Vonn said that “this is a must-medal situation for Mikaela. The stakes could not be higher.”

After the race, Vonn tweeted that she was “gutted for Mikaela Shiffrin but this does not take away from her storied career and what she can and will accomplish going forward.”

Biles, the star gymnast who put the spotlight on mental health in athletics in Tokyo last year when she withdrew from several events, tweeted heart emojis directed toward Shiffrin on Wednesday.

She also retweeted a comment by writer Charlotte Clymer, who said that “shaming people just because they didn't perform well at the Olympics feels like the opposite of why we supposedly have the Olympics in the first place.”

NBC pointed out that Shiffrin was a world-class athlete enriched by endorsement deals with her face emblazoned on billboards.

If NBC was playing an expectations game, it wasn't alone.

“Let's all remember, Mikaela Shiffrin is a professional athlete who has won 73 times and (has) three Olympic gold medals,” Solomon said. “She one of the greatest alpine skiers of all time. She's 26 years old and incredibly accomplished. So, for all of us, of course she's going to be one of the centerpieces of the Games. I would think that she would want that.”