NBC presses on after rough start in transitional Olympics 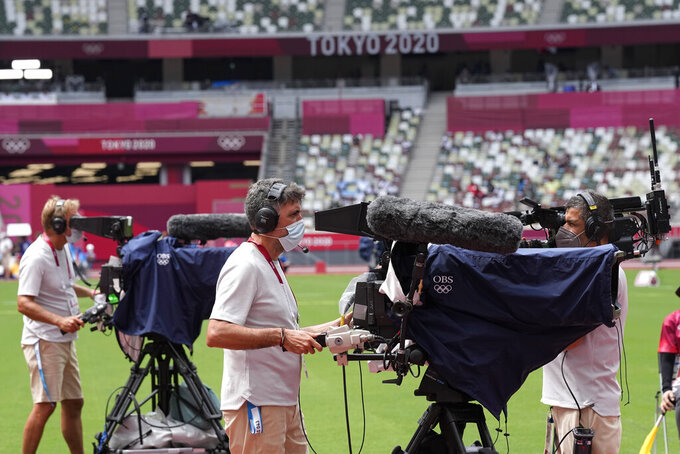 Cameramen film events during the athletics at the 2020 Summer Olympics, Saturday, July 31, 2021, in Tokyo. The willingness of athletes, led by Simone Biles, to talk about the pressures they face as elite athletes on the Olympics stage, has forced a look at how NBC presents the Games to the public. Some athletes thrive in an intense, winner-take-all atmosphere, but others don't. Experts say they hope NBC concentrates on more than just a medals count, but also the experience of athletes in a pandemic-delayed, isolated environment. (AP Photo/David J. Phillip)

NEW YORK (AP) — On the penultimate day of the Tokyo Olympics, NBC Universal got the kind of picture that it pays for: Kevin Durant, draped in the American flag, exulting in the U.S. men's basketball team's gold medal victory over France.

The team persevered after losing its first game in Tokyo and so did NBC, pressing on after an admittedly shaky start at a pandemic Olympics that began with more trepidation than anticipation.

It was in many ways a transition Olympics for the media company, where the old ways in which America has consumed the Games are fading fast and new ways still taking hold.

“They are different, and we have never shied away from that,” said Pete Bevacqua, NBC Sports chairman. “We said this was a different Olympics, necessarily so, but it's still wonderful, it's still great and it's still the best 17 days in sports.”

He said NBC Universal will make money on the Games, though he wouldn't say how much. NBC has hustled to schedule “make goods,” meaning giving advertisers extra commercials because TV viewership was lower than expected, and Bevacqua predicted 99% of the obligations will be completed at Olympics' end.

The Olympics began with COVID-19 worries, some unexpected losses by Americans and the withdrawal from most events by gymnastics star Simone Biles. With the performance by Americans improving, NBC largely avoided the drop in consumer interest that traditionally comes during the second week of the Olympics.

There's no sugarcoating the dramatic decline in the broadcast network's prime-time show, the flagship of Olympics coverage. For many nights, NBC's audience was half what it was for the Rio de Janeiro Games five years ago.

With the explosion of streaming and video on demand, live television viewership is way down across the board. That actually provides a measure of financial protection; NBC's rival networks are down, too, and few events reach an audience as large as the Olympics, even in a diminished state.

Americans approached the Games with a collective shrug. Thirty-six percent of those polled in late July by Monmouth University in New Jersey said they had less interest in the Olympics than usual, and 3% had more interest.

One reason given for diminished interest, particularly by Republicans, was disgust about athletes making political statements, said Patrick Murray, director of Monmouth's polling institute. There was little of that in Tokyo. There was, however, an odd eruption of social media glee among some American conservatives, and former President Donald Trump's statement that “woke means you lose,” when the U.S. women's soccer team lost its chance at the gold medal.

Consumers are following the Olympics in different ways. Cable ratings rose. NBC had its Olympics website and the Peacock streaming service — the latter for the first time.

Many young people, in particular, kept up to date through video clips on their devices. More than 1.4 billion minutes of highlights and clips have been streamed, a 37% increase from the Rio Games, Bevacqua said.

A study from the 2018 Winter Games found that one-sixth of the Olympics content consumed by Americans was streamed on devices, and that percentage was likely larger in Tokyo, Billings said. In China, 40% of consumption four years ago was on devices.

“You can follow it on Instagram or Snapchat,” Billings said. “But I don't think anyone has cracked the code on this to remotely make the money that you can on television.”

NBC Universal said it now has 52 million people signed up for Peacock, exceeding its expectations. The coming months will see if some of the new customers stay. Billings said NBC needed to do a better job making Peacock a central gathering place for the Games.

NBC, which in years past faced some criticism for not showing enough Olympic events, had the opposite issue in Tokyo. So much was shown that that fans had trouble making sense of it all, and knowing where they should go to see something specific.

Wrote critic Aaron Timms in the Guardian: “Viewers have been able to see everything at any given moment (provided you have the Peacock streaming service) while understanding fundamentally nothing about what's going on.”

Bevacqua conceded the need to improve the navigation experience. “I think we've done a better job since the Games started,” he said. “We've responded to that.”

NBC also took steps to diversify its prime-time menu, though it was still dominated by gymnastics, swimming and diving, and track and field.

The lack of spectators was jarring at first. One awkward moment was when an NBC volleyball announcer, during a key moment when a judge reviewed a call, said, “you can hear a pin drop in this arena." The venue was largely empty.

But spectators rarely play a role in Olympics events, and there was some charm in the way NBC used video conferencing to connect athletes to family and fans back home. The pandemic also seemed to pull athletes together, and NBC adeptly picked up on the scenes of sportsmanship.

“I think it was a psychological lift that the country needed and has responded to,” Bevacqua said.

Now the company faces a short turnaround. The Winter Olympics in Beijing is scheduled to start in six months.