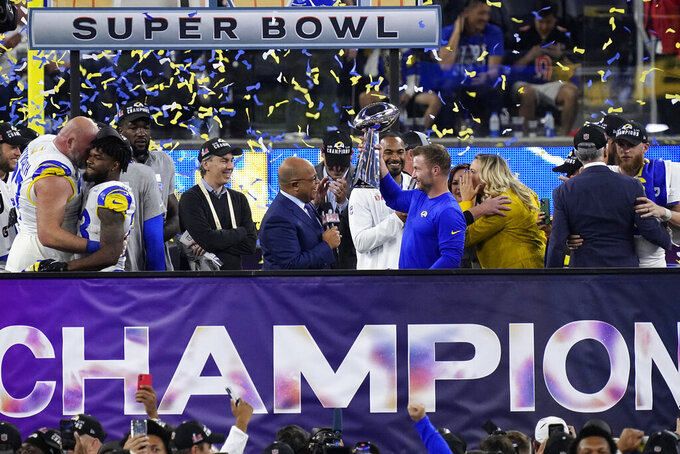 LOS ANGELES (AP) — Mike Tirico has traveled over 12,500 miles in the air over the past week and hosted two major sporting events.

And he still isn't done.

Tirico is back at NBC Sports Group headquarters in Stamford, Connecticut, to host the final week of the Winter Olympics. He anchored primetime coverage the first five days from Beijing before flying back to the U.S. on Feb. 8. He did the Feb. 9-10 shows from NBC's headquarters before going to Los Angeles, where he hosted the Super Bowl and three days of Olympics.

"We’ve hosted the Olympics from this lake set (outside SoFi Stadium), from the field of the Super Bowl, from China and from our studio in Connecticut all in like a week, which is just nuts,” Tirico said Sunday night after hosting the Olympic primetime show. “It’s a big difference from sitting in the international broadcast center somewhere and not having any feel for it.”

Tirico said he needed only two cups of coffee Sunday to help get him through the day, which included the five-hour pregame, presenting the Vince Lombardi Trophy to the Los Angeles Rams after their 23-20 victory over the Cincinnati Bengals and then hosting the primetime Olympics show, which started 21 minutes early because of how quickly the Super Bowl game ended.

With having to navigate three different time zones over the past week, Tirico said he leaned back on his days at ESPN where he did the late-night 2:30 a.m. SportsCenter by thinking he was on Pacific time. That was particularly helpful Saturday when he had to rehearse the Super Bowl pregame show before going right into Olympics coverage.

“I feel great. I’m not dragging at all,” Tirico said. "It’s been beyond my wildest dreams and how much fun and energizing the whole experience has been. It has been an awesome whirlwind. The pinnacle of hosting anything in America is hosting the Super Bowl pregame show. And then to do the Olympics from the field is amazing."

He also said the Super Bowl matchup between the Bengals and Rams worked out well since he was familiar with both teams. Tirico did the Bengals' wild-card round win over the Las Vegas Raiders while the Rams made two appearances this season on “Sunday Night Football."

Also, instead of looking ahead, the rhythm of Olympics competition forced Tirico to focus solely on the day at hand.

Tirico's goal for the remaining nights of the Olympics is to finish strong, especially with ladies figure skating and the medal rounds in men's and women's hockey occurring before the closing ceremonies take place on Sunday.

“I think with any of us who hosts the Olympics, part of our real joy is helping to put together those final essays and the final capsule of what the games are all about," he said. "And then the following Monday, I’m going to chill. That’s for sure.”