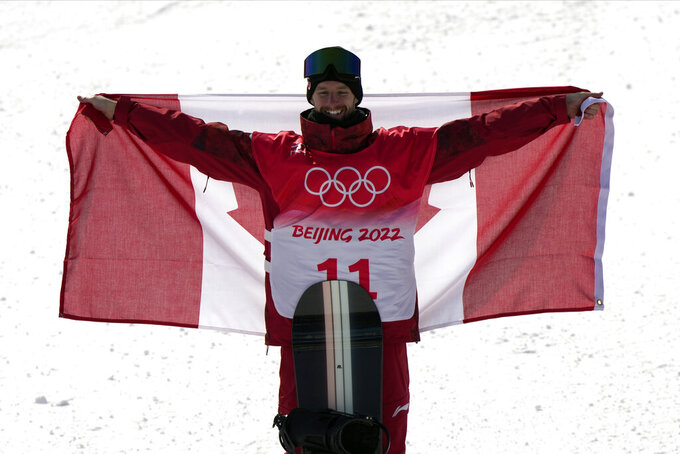 ZHANGJIAKOU, China (AP) — Even champion snowboarder Max Parrot knows he got away with one. Still, he's not giving back his gold medal.

A few days after winning the Olympic slopestyle contest, Parrot told CBC Sports he knew he grabbed his knee, not his snowboard, during his winning run.

“Everyone that snowboards knows I missed that grab. I’m not hiding from that. It is what it is,” the Canadian said.

Parrot's feel-good story — winning a gold medal some three years after beating cancer — took an uncomfortable turn almost as soon as he got off the mountain Sunday. Angles of the first jump of his winning run show him grabbing his knee when the judges scored his run as though he'd grabbed his board — a key element in the event.

The snowboarding community was up in arms. When the judging panel walked into a restaurant hours after the contest Sunday night, tables full of snowboarders from different countries booed and hissed.

Board grabs are every bit as important as flips and spins in a snowboard contest, and coming up short on a grab is something like taking an extra step, or falling, in a gymnastics floor routine.

The lead official on the judging panel told snowboarding website Whitelines that the judges weren't provided with replays or shots of some of the angles that were showing up on social media after the contest.

“It would be different scores yes,” Iztok Sumatic told the website in answering what would have happened had judges spotted a missed grab. “But there are so many factors. All I can say, in Max’s defense ... is that it was still an insane run. He killed it, especially on the rails.”

Officials from the International Ski Federation (FIS) said Sumatic would not be available for any more interviews.

Parrot beat China's Su Yiming by 2.26 points and topped Mark McMorris by 2.43 — a margin that would be easily erased if judges deducted for a missed grab.

Su was the only rider to perform an 1800-degree spin in the contest. McMorris put down a smooth run through the rails, landed every jump and spiked his snowboard in celebration after he finished. He looked as though he thought he'd won. When the score came up, he threw the board back down.

After the contest, both McMorris and fourth-place finisher Red Gerard were magnanimous but conceded there could've been issues with the judging.

Later, in a separate interview with CBC Sports, McMorris said he had the best run of the day.

Parrot said he still thought he earned the gold medal.

“I admire Mark, I admire Su ... I think in the end the only difference is they had multiple small mistakes and I only had one, which was definitely bigger, I agree,” Parrot said.

Judges got a break of sorts in Friday's halfpipe contest. They were getting skewered on social media after placing Japan's Ayumu Hirano behind Scotty James after Hirano became the first rider to land a triple cork — three off-axis flips — as part of a complete run. Hirano came back on the last run, landed it again, and the judges put him in first.

Once the results are official, there's nothing left to be done. Sumatic said he was hearing the criticism but was also receiving support — including from Su's coach.

“We just had this camera angle that they gave us and it looked clean,” Sumatic said. “We judged what we saw and everyone felt confident with it.”

All these snowboarders will be back at it Monday in Beijing for big air qualifying.