Once savvy, NBC's Olympics deal is shakier after Beijing 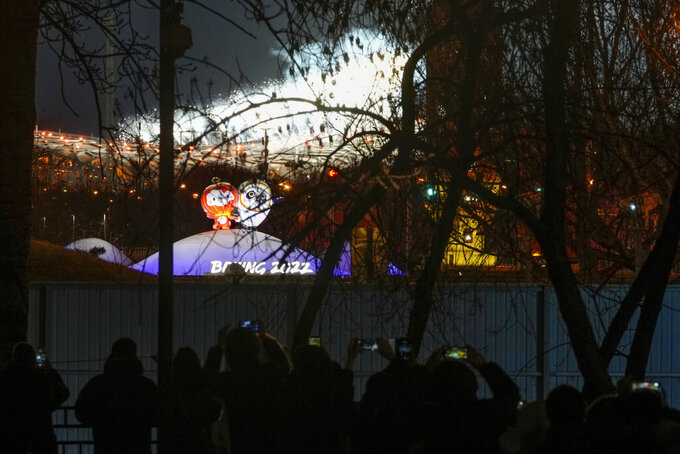 Residents film the fireworks explode over the iconic Bird's Nest Stadium during the opening ceremony of the 2022 Winter Olympics, in Beijing, Friday, Feb. 4, 2022. (AP Photo/Andy Wong)

NEW YORK (AP) — There were many reasons to think NBC made a savvy business deal in 2014 when it locked up the American media rights to the Olympics through 2032 for $7.75 billion.

As the Beijing winter games come to a close, it's harder to see them now.

These Olympics were a disaster for the network: a buzz-free, hermetically-sealed event in an authoritarian country a half-day's time zone away, where the enduring images will be the emotional meltdown of Russian teen-agers after a drug-tainted figure skating competition and a bereft Mikaela Shiffrin, sitting on a ski slope wondering what went wrong.

Many American athletes underperformed, and arguably the most successful — freestyle skier Eileen Gu — competed for China.

Viewers stayed away in alarming numbers, and NBC has to wonder whether it was extraordinarily bad luck or if the brand of a once-unifying event for tens of millions of people is permanently tainted.

“Given the investment, they've got to be disappointed right now,” said Andrew Billings, director of the sports communications program at the University of Alabama.

Network executives say there are no plans to try and adjust or escape from its rights deal. Several experts say that would be unlikely, given how live sports are increasing in value and represent one of the few ways advertisers can gather large audiences to sell automobiles or beer. NBC Olympics President Gary Zenkel talks optimistically about future games in Paris, Italy and Los Angeles.

Beijing, like Tokyo last year, took place in an environment where the primary objective was to prevent the spread of COVID-19. That meant no fans or athletes' families in the stands, no quirky stories about the host country and even few announcers: most of NBC's team worked from an office building in suburban Connecticut.

“Certainly one of the great supporting actors in every Olympics is the host city,” Zenkel said. “It's the culture, the people, even the sponsor activations. People from all over the world come together and that is not (in Beijing) and there's no way for us to try to translate something like that.”

Through Tuesday, an average of 12.2 million people watched the Olympics in prime-time on NBC, cable or the Peacock streaming service, down 42 percent from the 2018 Winter Olympics in South Korea. The average for NBC alone was 10 million, a 47 percent drop, the Nielsen company said.

That’s even with the average inflated by airing directly after the Super Bowl, a night that brought in 24 million viewers.

NBC Sports chairman Pete Bevacqua said ratings are in line with what they told advertisers, who are sold packages that include linear and streaming coverage. NBC has not yet said whether the Beijing games turned a profit or lost money.

Thursday’s figure skating, where Russian Kamila Valieva competed despite a positive drug test and fumbled away any chance at a medal, was excruciating television.

One woman on Twitter proclaimed the Olympics were “over for me. My lasting impression will be fake snow against a backdrop of 87 nuclear reactors in a country with a despicable human rights record during a pandemic. And kids who can look forward to years of therapy.”

The image of Valieva standing alone on the ice, looking terrified before her performance, stuck with NBC's Mike Tirico. “The adults in the room left her alone,” he said on the air. “Portrayed by some this week as the villain, by others as the victim. She in fact is the victim of the villains.”

While there has long been corruption in the bidding process for the Olympics, the Valieva episode tarnished the actual competition, Billings said.

“That's even more damaging to the product,” he said.

For NBC, “this feels like a particularly vulnerable moment,” said someone closely involved with the Olympics and television, who spoke on condition of anonymity because of ongoing business ties.

The person would not be surprised if someone at NBC was looking for ways to improve its deal with the International Olympic Committee given how badly Beijing went, but thought it “highly unlikely” the network would try to get out of the deal altogether.

The time zones for Paris and winter 2026 in Italy are still not ideal, with the prospect of no live events in prime time in the United States. That changes for Los Angeles in summer 2028.

The 2030 Winter Games could be held in North America, with Vancouver and Salt Lake City expressing interest. The IOC could name a host city next year. Brisbane, Australia, was named the summer 2032 host last year.

Bevacqua and NBC realize there is work ahead to build an Olympic brand that has been tarnished over the past six months.

“I think we in many ways have to work internally with the IOC with the USOPC to rejuvenate the Games coming out of Tokyo and Beijing in preparation for Paris, Italy and LA. That is going to be a strategic priority of ours,” Bevacqua said.

NBC knew, even before the pandemic, that the Tokyo and Beijing games were likely to be the low point of the rights deal, said John Ourand, media writer at the Sports Business Journal.

“Things look particularly bleak now,” Ourand said. “It certainly is a low-water mark. But two of the next three Olympics are going to be blockbusters for NBC.”

Between cord-cutting and changed viewing habits due to streaming, the media world is in the midst of revolutionary change in how entertainment is consumed. Live sports is one of the few dependable ways to get people to turn on their televisions. Even though rights fees are rising astronomically and viewership is going down, few media companies regret these investments, said Neal Pilson, a former CBS Sports president who runs a sports consulting company.

“I don't think they will look to get out of it,” said Rick Burton, professor of sports management at Syracuse University and one-time chief marketing officer for the U.S. Olympic Committee. “It's Park Avenue. It's a showcase property that no one else has. They just have to make it more attractive for people who are moving away from TV.”

That means being able to monetize different ways that people consume Olympic content, particularly a young generation searching on phones for something interesting. Streaming is becoming more important — NBC has so far streamed 3.5 billion minutes from Beijing, compared to 2.2 billion in South Korea — so expect more attention paid to Peacock.

“We’re at a place now where you can open up an app on your phone or a connected TV and have a place where the Olympics are staring you down in all their glory," Zenkel said. "There isn’t a piece of content that’s not discoverable.”

Although European games might not be best for a prime-time television audience, they will be better for people who want to see events on demand, NBC said. The executives said it was possible that more exclusive content will be moved to Peacock, which requires a paid subscription. But they also envision Peacock as a one-stop home for everything about the Olympics.

“I wouldn't run to say (the rights deal) is not working for NBC,” Pilson said. “On the contrary, I think it is and it will work better for them.”