A red, white and blue Olympics in Los Angeles in 1984 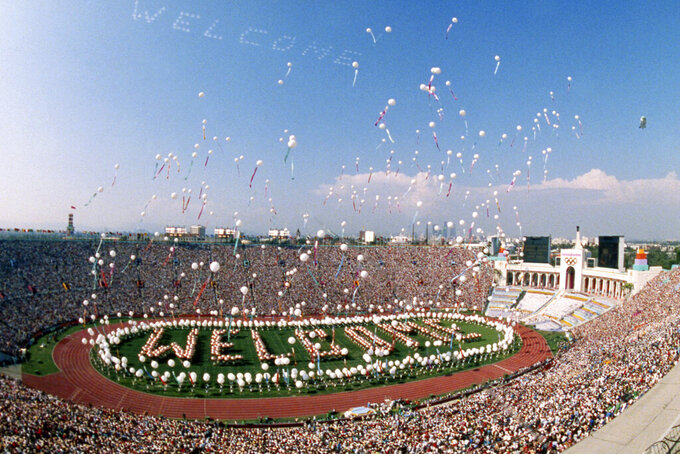 FILE - In this July 28, 1984, file photo, some 1,200 helium balloons are released into the air from the field of the Los Angeles Memorial Coliseum as part of the opening ceremony for the Summer Olympic Games in Los Angeles. (AP Photo/Dave Tenenbaum, FIle) 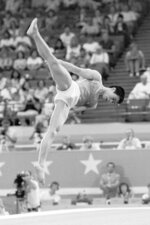 EDITORS — With the Tokyo Olympics postponed for a year because of the coronavirus pandemic, The Associated Press is looking back at the history of Summer Games. Here are some of the highlights of the 1984 Los Angeles Olympics.

The streak kept growing, something Edwin Moses was reminded of every time he stepped on the track. By the time he got to Los Angeles for the 1984 Olympics it had been seven years and 104 races since someone had finished ahead of him in the 400-meter hurdles.

Nobody could beat Moses. That’s just the way it was, which made it foregone conclusion among most in track and field that the gold medal would be his.

That the Soviets wouldn’t be there because of a revenge boycott made it even more of a lock. Same with the East Germans, and their weirdly muscular bodies.

But Moses still had to deliver in the Olympic final on a beautiful Sunday evening at the LA Coliseum. And one of the greatest track athletes of all time did just that, grabbing such a big lead he was able to ease up at the finish line to collect his second Olympic gold medal.

“I took nothing for granted because there was no margin for errors,” Moses said in a recent interview with The Associated Press. “You’re jumping over things at a high rate of speed, and anything could happen.”

Moses did stumble over some of the words to the athlete’s pledge he was picked to recite to open the games, so the Olympics weren’t perfect for him. But after winning gold in Montreal in 1976 and then losing a chance to compete when the U.S. boycotted the 1980 games in Moscow, he was finally a multiple Olympic gold medalist.

Moses was a lot of other things, too, including being a leader in allow Olympic athletes to be paid. A few years earlier he played a big role in getting Olympic officials to change strict amateurism rules, and was making $400,000 a year - unheard of for a track athlete - as he went into the Games.

Moses was also a prominent athlete’s voice in favor of widespread testing for steroids after seeing in 1976 what the East Germans and others were doing.

“I’d never seen anything like that in my life,” he said. “I was shocked to see women have a build like that, with hairy legs and deep voices. I saw how they blew our women away, and the men too. It was very disturbing to me.”

With much of the Eastern Bloc boycotting, Americans dominated at the first Summer Olympics in the U.S. since Los Angeles hosted in 1932.

At a time the Olympics were on shaky financial ground and having trouble finding host cities, Peter Ueberroth stepped up and promised an Olympics that would cost Los Angeles taxpayers nothing. He delivered using mostly existing venues — including the Coliseum that hosted the 1932 Games.

The naysayers said it couldn’t be done, and that LA would sink financially while there would be horrendous traffic jams on the freeways. But the Games ended up to be both a financial and athletic success.

They were also a one-sided showcase of American superiority, with the host country winning 83 gold medals while no other country won more than 20. And they delivered what Ueberroth promised, a $223 million profit that is still being used today by the LA84 Foundation to fund youth sports in Southern California.

“It’s been a beautiful gift to the city of Los Angeles and the 3.5 million kids that have been impacted by what the foundation has been able to do," said Renata Simril, president and CEO of the LA84 Foundation. “And the Olympics themselves were a moment on which the spirit of LA and the Olympic movement are all about. I meet people all the time and the first thing they want to tell me is their LA84 stories."

Among the highlights of the American-dominated games -- fittingly with a mascot of Sam the Eagle — were:

Lewis made the Coliseum his own personal playground, winning four gold medals to match the record of Jesse Owens in the 1936 Olympics. Lewis did it in the same events as Owens, winning the 100 and 200-meter sprints and anchoring the 4-by-100 relay. He added a fourth in the long jump to cement his place in Olympic history. Lewis would go on to win nine gold medals over four Olympics.

Mary Lou Retton would get on a Wheaties box for becoming the first U.S. gymnast to win gold medal in women’s overall. The U.S. men also won a gold team medal, but it was Romania’s Ecaterina Szabo who landed the biggest haul with four golds and a silver.

With no Soviets and no Cubans, Americans dominated boxing, winning 9 of 12 golds plus a silver. Evander Holyfield won the other US medal, a bronze, after being disqualified in the semifinals for knocking out New Zealand’s Kevin Barry with a punch that officials said came after the referee called for a break.

The first women’s marathon was won by Joan Benoit of the U.S. Another American track favorite didn’t fare as well. Mary Decker was picked to win gold in the women’s 3,000-meter final but tripped over the bare feet of South Africa’s Zola Budd and fell to the track, writhing in pain. A tearful Decker claimed Budd had bumped into her, but officials ruled the results of the race would stand.

Participating in its first summer Olympics since 1952, China served notice it would become a sports power by winning 15 golds and 31 medals overall. Chinese athletes became favorites of the LA fans, who also supported the Romanians because they had defied the Soviet boycott to compete in LA.