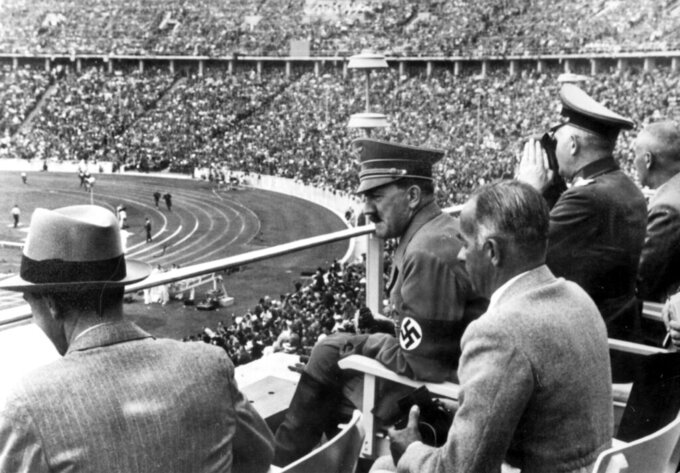 FILE - From left to right, Dr. Joseph Goebbels, German Chancellor Adolf Hitler, Reichs Sports Leader Hans von Tschammer und Osten and General Field Marschall Werner von Blomberg observe the Olympic Games in Berlin, Germany in August 1936. The International Olympic Committee has always been political, from the sheikhs and royals in its membership to a seat at the United Nations to pushing for peace talks between the Koreas. But Russia’s invasion of Ukraine three weeks ago exposed its irreconcilable claims of “political neutrality.” (AP Photo, File)

The International Olympic Committee has always been political, from the sheikhs and royals in its membership to a seat at the United Nations to pushing for peace talks between the Koreas. But Russia's invasion of Ukraine three weeks ago exposed its irreconcilable claims of “political neutrality.”

The IOC’s politics were evident at Hitler’s 1936 Olympics. During the Cold War, the Games were a stage for conflict (Mexico City), violence (Munich) and boycotts (Moscow). To this day, the IOC has partnered with authoritarian states like China and Russia, beginning with the 2008 Beijing Summer Olympics, through the doping-scarred Sochi Games to the just-closed Beijing Winter Olympics.

Yawning gaps exist between what the IOC has long insisted it is — “the very heart of world sport” — and a view that hews closer to reality; a nonprofit sports business, based in Switzerland, that generates about 90% of its income from selling broadcast rights and sponsorships.

Increasingly, the IOC must cater to rich sponsors that were barely a factor 30 years ago as the Games, almost bankrupt, turned commercial and professional. Olympic athletes are pressing for a larger slice of the pie, aware their careers are fragile (only 30% of them attend the Olympics more than once).

The most visible politics involve the 206 nations and territories that march into the Games under national colors, flags, and stirring anthems — but never in a vacuum. By comparison, the U.N. has only 193 member states.

Following the invasion of Ukraine — acting because of a breach of the so-called Olympic Truce and not because of the war itself — the IOC recommended that sports federations and event organizers “not invite or allow” Russian or Belarusian athletes to participate.

But it left loopholes, stayed out of the fray and urged others to act. Many have, leaving Russians and Belarusians out of most sports competitions. The IOC itself has not banned the Russian or Belarusian Olympic committees, nor IOC members from those countries, nor has it asked publicly that top IOC sponsors take any action.

The IOC tries to have it both ways — and often three or four ways.

“To take a strong stand on Russia is relatively safe. And the only critics will be those of us who point out the IOC's inconsistencies," said Helen Jefferson Lenskyj, a professor emerita at the University of Toronto and author of “The Olympic Games — A Critical Approach.”

The IOC has an in-house Athletes Commission, but it faces pressure from outside groups. To participate in the Olympics, athletes must sign away image and likeness rights, limit their freedom of expression and also sign waivers. Waivers for the Tokyo and Beijing Olympics had an added clause that relieved the IOC of responsibility from any fallout linked to COVID-19.

The IOC has said that athletes and national federations have insurance coverage for most eventualities.

Rob Koehler, general secretary of the advocacy group Global Athlete, said his body helped Ukrainian athletes write to the IOC, asking for a ban on Russia and Belarus. He said he has received neither a reply nor an acknowledgement of the letter.

“Failure to act swiftly against Russia and Belarus will continue to erode the Olympic brand," Koehler said, "and when that brand erodes the people that are most affected are the athletes — the ones that fill the stadium and draw sponsors and broadcasters."

In his first news conference 8 1/2 years ago as IOC president, Thomas Bach spelled out the organization's position with a precise ambiguity.

Before his words could be parsed, though, he added to the riddle: “But in order to fulfill our role to make sure that in the Olympic Games and for the participants the Charter is respected, we have to be strictly politically neutral. And there we also have to protect the athletes."

A day before the Winter Olympics opened last month, Bach said the position of the IOC must be “political neutrality.” He said to do otherwise would put “the Games at risk.” Three weeks later, after Bach stood next to Russian President Vladimir Putin and Chinese President Xi Jinping at the opening ceremony, Russia invaded Ukraine.

The IOC then acknowledged a reality, saying the war had created a “dilemma which cannot be solved.”

The key to the Olympics' success has been as much political as sporting. Part of the compelling tension behind the Olympics is the competition among countries, the nationalism, the flags fluttering and the riveting anthems. Winning the most gold medals becomes a surrogate for national superiority, increasingly a competition between authoritarians and democracies.

Many Olympic disciplines have scant popularity, drawing an audience every four years through the quest for gold. Few except for hardcore fans would care about Greco-Roman wrestling, modern pentathlon or fencing — if that is, nationalism were not the obvious backdrop. And China has become a power at the Winter Paralympics, allowing it to tout its lead atop the medal table to an increasingly nationalist audience.

Patriotism and politics drive some of the Olympics' appeal to sponsors and TV broadcasters, while simultaneously the IOC insists it is politically neutral. The IOC has permanent observer status at the United Nations to increase political clout — not reduce it. A sports business, the IOC is among a few nongovernmental bodies — the International Federation of Red Cross and Red Crescent Societies is another — that share the status.

Jules Boykoff, a political science professor at Pacific University and a critic of the IOC, suggested that instead of athletes marching under national flags, they should enter under sports disciplines — skaters together, basketball players in a group, gymnasts paired up. “Athletes might get to know each other more with that kind of mingling,” said Boykoff, author of “Power Games: A Political History of the Olympics.”

Boykoff said the IOC, if it acknowledges politics, “wedges open the door for a deeper discussion about what sort of politics the IOC supports.”

"Over the years the IOC has shown a conspicuous tolerance for tyranny. But by using `apolitical' as a shield, they can ward off the legitimate criticism and just claim they work with everyone regardless of politics. They choose to ignore the fact that neutrality can mean siding with oppressive forces.”

POLITICAL SINCE THE BEGINNING

Almost every Modern Olympics, dating from the first in 1896, has had political overtones.

In Antwerp in 1920, the countries defeated in World War I were not invited to attend. That meant Germany, Austria, Bulgaria, Hungary and the Ottoman Empire. Nor did the newly formed Soviet Union participate.

In Mexico City in 1968, Black Americans Tommie Smith and John Carlos raised their fists on the podium in a black-power salute. The U.S. Olympic Committee kicked them off the team, but in 2019 they were inducted into the United States Olympic and Paralympic Committee Hall of Fame.

China held the 2008 Olympics under a wide belief they could produce improvements in human rights, The consensus is that such progress did not happen, and the just-completed 2022 Winter Olympics were held in the middle of a pandemic amid worsening human rights conditions for minority Uyghurs and Tibetans, and a tightened grip on Hong Kong.

International Paralympic Committee President Andrew Parsons complained that his speech at the opening ceremony on March 4, which began with an impassioned anti-war plea, was censored by China's state broadcaster. China has declined to publicly criticize Russia's invasion, and Parsons' words in English were left untranslated or muted, which Chinese officials attributed to an unexplained “glitch.”

Now, the Olympics move from China, a country that bans virtually all protest, to France, where vigorous street protest is part of the culture — and where dissent could be played up rather than shut down. For Paris, when it comes to keeping order, it could be a rough ride.

Xu Guoqi, a historian at the University of Hong Kong and the author of “Olympic Dreams: China and Sports” suggests that any “new Cold War era" could be bad news for the Games. After all, as Xu points out, during the original Cold War “everything was political" and the Olympics were singed with three boycotts — Montreal, Moscow and Los Angeles. The Olympic spirit waned then — and could again.

“It seems to me," Xu said, that "there has never existed a pure Olympics.”