'Sheer tenacity': Taiwan skier falls on slope, picks self up 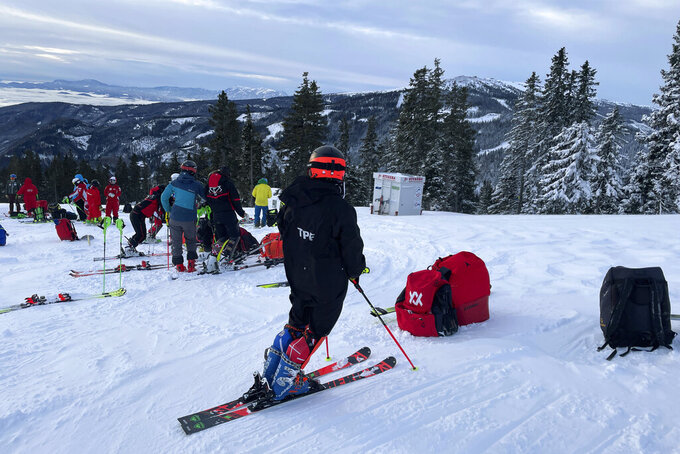 In this photo provided by Charles Lee, his daughter Maggie Lee, of Taiwan, waits at the start of a ski competition held in Austria on Jan. 6, 2022. The four Taiwanese athletes competing in Beijing for the Winter Olympics, which open Friday, Feb. 4, 2022, can’t use Taiwan’s flag and have long competed under a name, Chinese Taipei. “When I’m meeting people, I’ll them I’m from Taiwan, because, if you tell people you’re from Chinese Taipei, nobody knows where you’re from, you can’t find it on Google,” she said. (Charles Lee via AP)

TAIPEI, Taiwan (AP) — When 19-year old Maggie Lee fell on her first run down the slope and missed one of the early gates, it looked like the abrupt end of her first Olympics.

The teenager from Taiwan, who is competing under her Chinese name, Lee Wen-Yi, was already an unlikely candidate for the Winter Olympics. Taiwan is a subtropical island that only sees snow in its high mountains — and then only sporadically. So the only times Lee could ski were during school holidays when she would travel to Japan with her ski-instructor parents.

She later trained in Europe, and her father would drive her to competitions, zigzagging between countries.

Standing on top of the hill in Yanqing on Wednesday morning, on the biggest stage in her career, she thought something could go wrong. But she still didn't expect to actually fall.

“I actually didn’t think I would fall so quickly. It was only the third target on my first run,” she said. "I’ve worked so hard for so long. I thought this was not OK.

"So I decided to stand up and climb back up.”

Lee scooted up on the hill, in full ski gear, one step at a time, until she reached the gate she missed, which she then hit with her body.

And then she finished her run.

And then she went for the second leg, hitting all the gates.

“I did think, is it okay for me to climb like this at the Olympics?” she said.

Many other competitors were disqualified after missing gates in Wednesday's competition, including U.S. skier Mikaela Shiffrin, who was among the favorite to win multiple medals at this Olympics.

Lee's assessment: Most of the competitive athletes would not choose to climb because they are focused on their times and medals. Lee, though, is the first female slalom skier to represent Taiwan at the Games, competing under the name of Chinese Taipei. She never set out to win a medal, she said, but just to “ski beautifully.”

Since Wednesday, she's been overwhelmed by the positive response on the Chinese- and English-language internet, after Eurosport, a media outlet, posted a video of her fall and climb on social media, calling it an example of the “Olympic Spirit.” The video went viral, with more than 20,000 people liking the post. It was quickly picked up by Taiwanese media as well.

“Sheer tenacity! This is what makes the Olympics special," wrote one Facebook user.

“With this type of spirit, even if she doesn't win, I still feel very, very proud," wrote another.

And was she satisfied with the result? It added about 15 seconds to her time, and she finished in 50th place.

“I’ve been made famous by one fall," she joked. But she was satisfied.