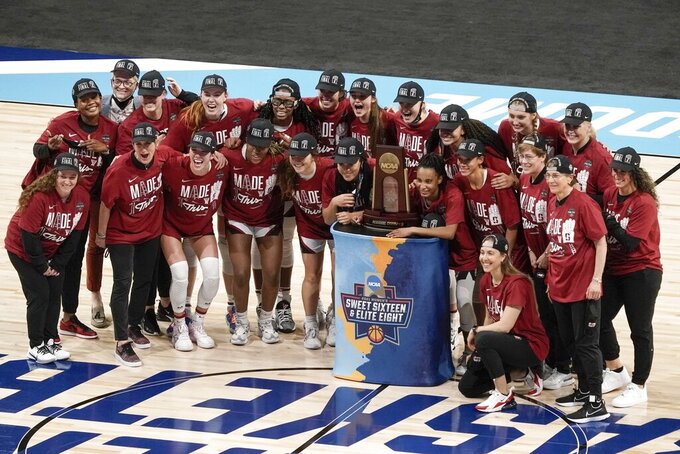 Stanford celebrates after an NCAA college basketball game against Louisville in the Elite Eight round of the Women's NCAA tournament Tuesday, March 30, 2021, at the Alamodome in San Antonio. Stanford won 78-63 to advance to the Final Four. (AP Photo/Morry Gash)

SAN ANTONIO (AP) — Dawn Staley remembers talking to her Olympic coach Tara VanDerveer before she took the job at Temple two decades ago.

The longtime Stanford coach actually suggested that Staley not become the head coach at the Philadelphia school because she was still playing in the WNBA and wouldn't have the time to do both well.

Twenty-one years later and Staley admits she still has a bit of a chip on her shoulder about that conversation and has used it as motivation both at Temple and now South Carolina.

“I don’t look down on her because she put that chip on my shoulder,” Staley said. “I just needed that, the past 21 years. I thank her for making the chip a little bit bigger.”

The two friends meet Friday night in the Final Four when VanDerveer and Stanford takes on Staley's Gamecocks.

VanDerveer said she has the utmost respect for her former Olympic point guard.

“As a player, she saw the game so well she really has great instincts, a great understanding of the game,” VanDerveer said. Thursday “She’s a great leader of her team.”

VanDerveer knew when she was coaching Staley in the 1996 Atlanta Games that she would be successful in whatever occupation she chose.

Staley is “someone who is super competitive, whatever Dawn decided to go into she was going to be at the top of whatever career she decided,” VanDerveer said. “In law, politics, she has it, she’s a very special person. I cheer for her every game except for the game tomorrow.”

This isn't the first meeting between the two on the big stage. They played in the 2017 Final Four and South Carolina rallied from a nine-point halftime deficit to win en route to the NCAA championship.

“I asked our team why can’t you execute what you want to execute?” Staley said. “One player raises their hand and was like 'because we’re millennials.' Really? That’s the answer you have.

“We all kind of laughed. Broke it down, huddled it up and got into their lead and eventually ended up winning the game.”

Some other things to look for in Friday night's matchup between South Carolina and Stanford:

Stanford freshman Cameron Brink injured her leg in the Cardinal's come-from-behind victory over Louisville in the Elite Eight. VanDerveer is expecting her to play Friday night.

In her place, Ashten Prechtel scored all 16 of her points in the second half to help the Cardinal rally to beat Louisville.

Stanford has been making 3-pointers at an impressive rate, connecting on 50 of them in the first four games of the tournament. The Cardinal are fifth in the country in made 3s and sixth in percentage at 38.3%.

South Carolina has been playing stellar defense, including shutting out Texas in the fourth quarter in their Elite Eight matchup. The Gamecocks blocked 14 shots in that game and held the Longhorns to just 23% shooting. South Carolina has been giving up just 74 points per 100 possessions in the women's NCAA Tournament so far, which only five teams have done over the past five years.

VanDerveer has been coaching for 43 year, winning two national championships. Staley doesn't see herself sticking around the game that long.

“For Tara and all the coaches who have dedicated their lives to growing the game and impacting young people as they have they’re doing it for all the right reasons,” Staley said. “There's no way a coach would stay in a profession they didn’t reap some inner satisfaction from.”