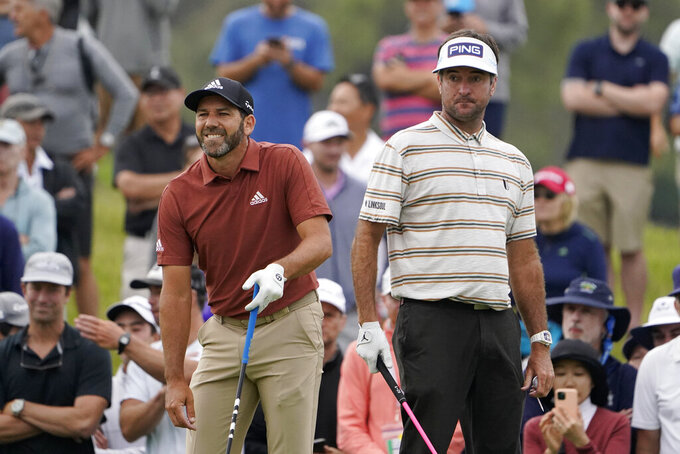 Sergio Garcia, of Spain, left, watches his shot on the 15th tee as Bubba Watson looks on during the second round of the U.S. Open Golf Championship, Friday, June 18, 2021, at Torrey Pines Golf Course in San Diego. (AP Photo/Jae C. Hong)

Four of the top 10 men in the world golf ranking are not going to Japan for the Olympics, only one of them by choice.

The 60-man field was set Tuesday based on the world ranking with a half-dozen late withdrawals, a list that included U.S. Open runner-up Louis Oosthuizen of South Africa, Tyrrell Hatton of England and Sergio Garcia of Spain.

Dustin Johnson, the No. 2 player in the world, had already said he would not be going because the Tokyo Olympics on July 29 through Aug. 1 are crammed into an already busy golf schedule.

Even so, it was a strong turnaround from Rio de Janeiro when golf returned to the Olympic program for the first time in a century and the world's best stayed home. Five years ago, with concerns over the Zika virus and security, men's golf was missing the top four players in the world who had combined to win six of the previous eight majors.

The Tokyo Games have already been postponed once, for a year, because of the COVID-19 pandemic. They are now scheduled for July 23-Aug. 8 with restrictions on athletes' movement and where they can stay.

American Bryson DeChambeau said he'll be there — as long as the games go on.

“As of right now, I definitely am going,” he said on Tuesday. “If something was crazy to happen, obviously, we all wouldn’t be going.”

The men's field still has four of the top five in the world ranking, and five of the past six major champions. That includes Hideki Matsuyama, the first Japanese player to win the Masters.

The women's field will be set next week.

Jon Rahm of Spain, who returned to No. 1 in the world with his U.S. Open victory, led the qualifiers. He was followed by four Americans — Justin Thomas, Collin Morikawa, Xander Schauffele and DeChambeau.

“I’ve always wanted to be an Olympian growing up, and to be considered an Olympian is quite an honor,” said DeChambeau, who was one year removed from his amateur days when the Rio field was set.

“When I missed it in Rio in 2016, I was like 'Man, that’s a goal of mine that I want to check off the list.' I want to be an Olympian for the American team," he said. "And I’m very fortunate to say that I’m an Olympian now.”

Garcia, who tied for eighth in Rio Olympics, posted to social media on Monday that his priority to Spain on an international stage was the Ryder Cup. Garcia is six spots out of automatic qualifying for the Ryder Cup through world ranking points. His spot in the Olympics went to Rafa Cabrera Bello.

Oosthuizen, who flew from San Diego to Germany to compete on the European Tour, said on Twitter that he wanted to focus on a strong finish to the PGA Tour season and to honor family commitments. He is preparing for farm life after buying an 86-acre ranch in Ocala, Florida.

Garrick Higgo, the dynamic 22-year-old who won on the PGA Tour two weeks ago, represents South Africa along with Christiaan Bezuidenhout.

Hatton, Matt Fitzpatrick and Lee Westwood each turned down spots for Britain. Hatton is No. 11 in the world and was the top qualifier. Fitzpatrick narrowly lost out on what would have been the second qualifying spot to Paul Casey at the U.S. Open. Westwood had said earlier he was not planning to go.

That left Casey and Tommy Fleetwood from England to wave the Union Jack.

Adam Scott of Australia has been opposed to golf in the Olympics and was never planning to go. The Aussies will have Cameron Smith and Marc Leishman. Also withdrawing were Bernd Wiesberger of Austria and Martin Kaymer of Germany.

The field does not include the three medalists from Rio.

Justin Rose, who won the gold medal in 2016, has fallen to No. 44 in the world and would have needed one more British player to withdraw. He was No. 14 in the world when the pandemic shut down golf in March 2020, and ultimately postponed the Olympics.

Silver medalist Henrik Stenson is mired in a slump. He was the British Open champion when he played in the previous Olympics. Now he is No. 155 in the world, and Sweden's two spots went to Alex Noren and Henrik Norlander. Matt Kuchar won the bronze. He now is the 31st-ranked American.

Only nine of the top 100 in the world turned down their Olympic spots.

The men's field will be represented by 30 countries, with newcomers such as Poland (Adrian Meronk) and Slovakia, which has Rory Sabbatini. The South African-born Sabbatini became a naturalized citizen in December 2018 through his wife.