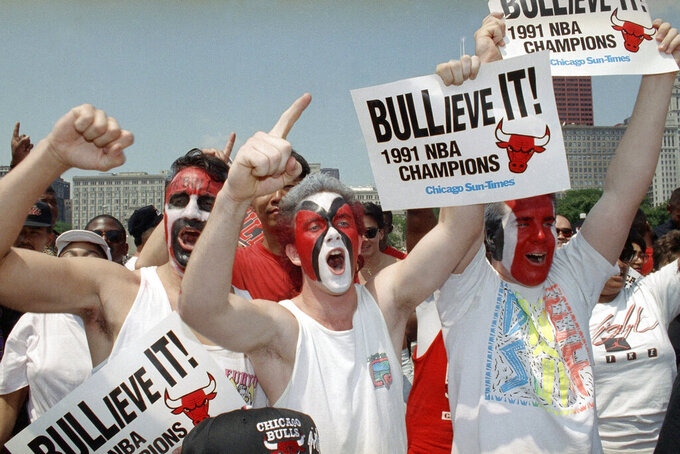 Michael Jordan had just won his first championship, beating Magic Johnson in the NBA Finals. They were poised to lead a Dream Team the world couldn’t wait to watch.

Yes, the NBA rolled into the fall of 1991 with unlimited promise.

Jordan, already basketball’s best and most popular player, was now on its top team. The 1992 Olympics were just a year away and for the first time would include NBA players, opening international doors the league previously couldn’t reach.

Then, suddenly, the foundation that never felt stronger was rocked by devastating news.

When Johnson announced that November he had contracted the HIV virus and would retire immediately, the sadness wasn’t just over the end of his career. There was fear for his life.

The virus caused AIDS, which was considered a death sentence at the time. People who got AIDS died, it was thought, just as Queen lead singer Freddie Mercury did the month Johnson retired. The consternation around the HIV virus then was similar to the mixed feelings the country and world has about COVID-19.

The NBA was still a relatively young league, just 45 years old, when Johnson disclosed his condition some fans thought one of its most beloved players was going to die.

Only Johnson didn’t die. Instead, he's credited for saving lives.

With the unrelenting backing of NBA Commissioner David Stern, Johnson would return to play in the 1992 All-Star Game, winning MVP honors and providing hope for health that had been mostly missing.

“We used to talk about it all the time, how we changed the world and we changed HIV and AIDS on that particular day, as well as we saved a lot of people’s lives that day,” Johnson tearfully recalled in 2020 at a memorial service for Stern.

But those conversations weren't the norm for the NBA at that time.

Unlike the active role players took in the 1950s and ‘60s, or take today when it comes to social issues and race relations, during the 1990s players largely shied away from issues outside of basketball.

Johnson and Larry Bird loathed discussions of race that was at the center of their rivalry in the 1980s. Jordan refused to endorse Black candidate Harvey Gantt in his 1990 North Carolina senate race against Jesse Helms.

When Rodney King was beaten by Los Angeles police in March of 1991, there was nothing from players similar to the Milwaukee Bucks' refusal to play a playoff game in 2020 following the shooting of Jacob Blake in Wisconsin.

But Johnson's announcement forced the NBA to deal with an issue many Americans hadn't been ready to address.

Orin Starn, a professor of cultural anthropology at Duke, said Johnson and the NBA helped changed the way AIDS was viewed — an illness for homosexuals, and those who weren't gay didn't care to learn how it was contracted or spread.

“So in that context, to have one of the most famous men in America and one of the most well-liked men in America, Magic Johnson, announce that he had HIV/AIDS was a huge deal," Starn said. "And it kind of marked the entry of AIDS into the national consciousness in a new way also, because it made people realize that, hey, this isn’t just a problem for gay Americans or for intravenous drug users.

“It’s a problem everybody needs to address.”

The NBA began educating its players. That included stars like Karl Malone, who like others, had concerns about playing with Johnson. Terry Lyons, a longtime NBA executive, remembers calls coming into the league office with questions they couldn't answer.

A doctor was brought in to address players and coaches during the 1992 All-Star weekend in Orlando. Public health education became a responsibility within the league, one that has continued into the coronavirus pandemic.

Johnson then went as planned to the Barcelona Olympics, where the U.S. suited up what may still be the best team in sports history. Opponents were overpowered and fans overjoyed by the Dream Team, a roster of NBA All-Stars who willingly blended their talents to play basketball at the highest level ever seen.

One of those stars shined brighter than the rest.

Jordan, whose Bulls won their second of three straight titles in 1992, stood alone as a player and a pitchman. There was no rival in the way Johnson had Bird, or Wilt Chamberlain had Bill Russell. Jordan was the biggest thing in the sport and one of the most recognizable athletes in the world.

Little changed even when he retired in 1993 and went on to play minor league baseball. Hakeem Olajuwon led the Houston Rockets to the 1994 and ‘95 titles, but Jordan returned to the NBA and soon regained his grip on the league. He didn’t give it back until he retired again.

Charles Barkley, Clyde Drexler, Gary Payton, Malone and John Stockton all were victims of Jordan’s 6-0 mark in the NBA Finals, while Patrick Ewing and Reggie Miller lost out on title shots when Jordan derailed their opportunities before they even had a chance.

With Johnson breaking down barriers off the court, Jordan had taken flight on it and the NBA was soaring five years after one the league's darkest days ever.

The Bulls started a second run of three straight titles in 1995-96 and Jordan was back full-time — things looked better than ever. The growth of the NBA was evident with expansion into Canada for the Toronto Raptors and Vancouver Grizzlies.

The Bulls became the first NBA team to win 70 games and they seemed even bigger off the court, the team of Jordan, Scottie Pippen, Dennis Rodman and coach Phil Jackson attracting a worldwide following. Shortly after they won the '96 championship, the NBA welcomed one of its deepest draft classes, a group that included Kobe Bryant, Allen Iverson, Steve Nash and Ray Allen.

The rookies knew they were walking into Jordan's NBA.

“Michael was on the Bulls when I came in the league, so I didn’t come in expecting to win, that’s for sure,” Nash said. “It was in a sense alarming to play against him. because you’d sat there and watched him win and win and win, and be so dominant and be someone that everyone was intimidated by."

Adding to the euphoria of the 1995-96 season: Magic Johnson, who was heathy enough to return and play in 32 games.

Starn, who lived in San Francisco at the time of Johnson's retirement and recalls the sadness for homosexuals who knew infected friends and were resigned to watching them die, said seeing Johnson playing again provided hope that medication had stopped AIDS from being a death sentence.

During the 1990s, the true globalization of the NBA began and the league took a huge step in the ongoing struggle for gender equity in sports.

The 1996 Atlanta Olympics were a coming-out party for women's basketball, and the league launched the WNBA in 1997. Jordan was gone again by the end of the decade, but by then NBA drafts were featuring international players such as Dirk Nowitzki and Manu Ginobili, another legacy of the Dream Team.

Once Jordan, Johnson and their teammates showed the best of basketball to the rest of the world, everyone seemed to want to be in the NBA.

“It was just incredible ... it just kept coming,” Lyons said. “Guys started coming from everywhere. The stars were just aligning.”

The cloud of doom that hovered over the league in the early 1990s was now long gone by the end of the decade. Johnson was changing the world’s view of AIDS and Jordan was completing the transformation of the NBA on the court.