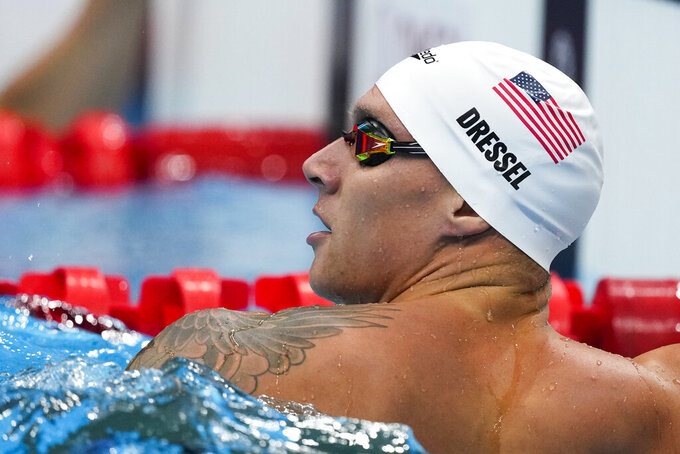 Caeleb Dressel, of the United States, reacts after winning a heat of the men's 100-meter butterfly at the 2020 Summer Olympics, Thursday, July 29, 2021, in Tokyo, Japan. (AP Photo/Charlie Riedel)

TOKYO (AP) — A few hours after winning the first individual gold medal of his career, Caeleb Dressel returned to the pool Thursday night to tie an Olympic record in preliminaries of the 100-meter butterfly.

Dressel touched first in the last of eight heats with a time of 50.39 seconds, equaling the mark set by Singapore’s Joseph Schooling when he won gold at the 2016 Rio Olympics.

Katie Ledecky also did double duty, advancing to the final of her last Olympic event with the top preliminary time in the 800 freestyle.

After anchoring the United States to a silver medal in the 4x200 free relay, Ledecky was back at the Tokyo Aquatics Centre to post the top qualifying time of 8 minutes, 15.67 seconds.

Another American, Katie Grimes, was the second-fastest qualifier at 8:17.05. Australia’s double gold medalist, Ariarne Titmus, also advanced to Saturday morning’s final to set up one more showdown with Ledecky.

Ledecky will be going for her second gold medal of these games and sixth individual gold overall, which would be the most of any female swimmer. She’s currently tied with Hungarian great Krisztina Egerszegi.

Dressel, who earlier Thursday won the 100 freestyle, holds the world record in the 100 fly, setting the mark of 49.50 two years ago at the world championships in Gwangju.

He moved on to Friday's semifinals along with Hungary’s Kristof Milak, who was second-fastest at 50.62 and looking to add to the gold he captured in the 200 fly.

A couple of big names failed to make the top 16, which was needed to advance.

South African gold medalist Chad le Clos was 18th, while Schooling was far back with the 44th-fastest time. Only 11 swimmers went slower than the defending Olympic champion, who has struggled mightily since his memorable upset of Michael Phelps five years ago.

Australia’s Kaylee McKeown continued her pursuit of a backstroke sweep.

Hungarian star Katinka Hosszu turned in another disappointing performance, failing to advance with only the 20th-fastest time. She was silver medalist in this event at the 2016 Rio Olympics, where she also captured three gold medals.

The world-record holder, Regan Smith, stunningly failed to make the U.S. team in the 200 back. She was upset at last month’s trials by White and Bacon.

The mixed 4x100 medley relay made its Olympic debut with a pair of heats.

The American quartet of Regan Smith, Andrew Wilson, Tom Shields and Abbey Weitzeil was next at 3:41.02.