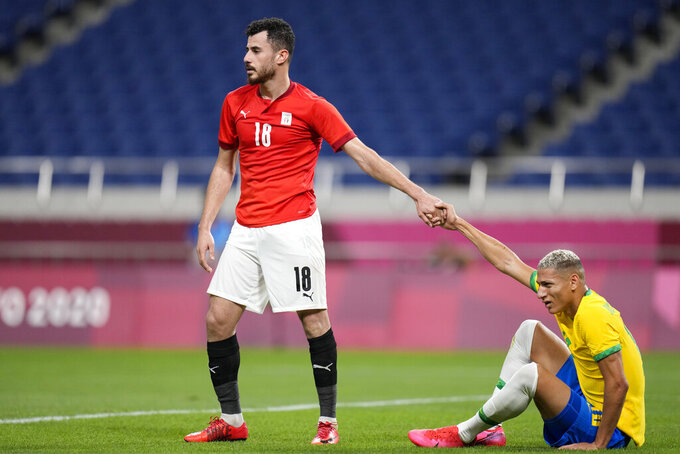 TOKYO (AP) — In the close-up photos of this pandemic-era Olympic Games, you can imagine the world's most competitive athletes saying to their rivals: “Are you OK?”

The striking images that show these world class athletes displaying acts of empathy and kindness to their competitors may be unexpected. But they're very much appreciated by a global audience that's been banned from the venues as a coronavirus precaution.

Viral photos from an variety of sports depict a clearly pained Olympian juxtaposed by another's outreach of generosity.

The emotions are vivid in the frame of Mexico’s Jesus Angulo and teammate Luis Romo comforting Japan’s Takefusa Kubo while another Japanese teammate appears devastated after their men’s bronze medal soccer match.

The passionate pep-talk heard around the world came from a shot of Norwegian Lotte Miller trying to bring ease to an inconsolable Claire Michel of Belgium, who was slumped on the ground sobbing after coming in last in the punishing women's triathlon.

Look beyond the tangle of legs and arms in the finals at the women’s 400-meters race for an image of Stephenie Mcpherson, of Jamaica, reacting in disbelief as she is helped from the track.

In the midst of an extraordinarily difficult Olympics where athletes are separated from friends, family and the crowds that cheer them on, it's humanity at its best.