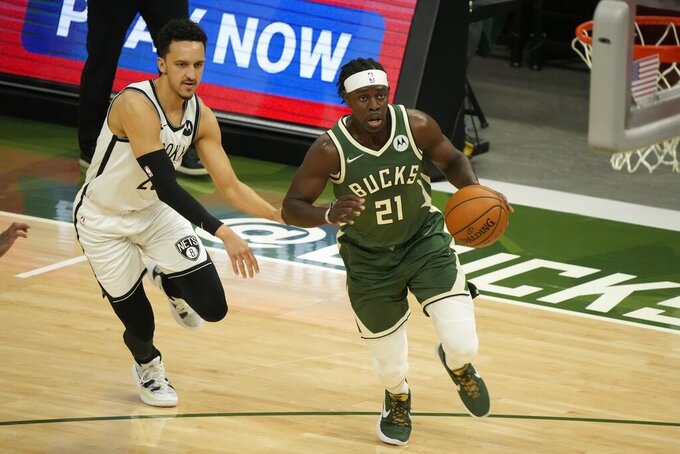 Jrue Holiday is planning to try to follow in his wife’s footsteps and win an Olympic gold medal.

Holiday has committed to USA Basketball for next month’s Tokyo Games, along with his Milwaukee teammate Khris Middleton and Cleveland forward Kevin Love, said to a person with knowledge of the decisions.

Holiday and Middleton are planning to play at this point even if the Bucks make the NBA Finals, the person said. The person spoke to The Associated Press Tuesday on condition of anonymity because the team has not yet publicly released the roster.

It would be the first Olympics for Holiday and Middleton, and the second for Love — who was on the U.S. team that won gold at the 2012 London Games.

Another gold medalist from 2012 was the player then known as Lauren Cheney, who won her second consecutive Olympic gold as part of the U.S. women’s soccer team. She’s now known as Lauren Holiday, after marrying Jrue in 2013.

And now, it’s her husband who is pursuing the gold medal.

Jrue Holiday was part of the select team that helped the 2012 team prepare for the Olympics, and has been part of other USA Basketball experiences along the way — but never anything as significant as the chance to play in Tokyo.

Middleton was part of the most recent U.S. men’s senior national team, playing for coach Gregg Popovich — who’ll also lead the Olympic team — at the 2019 Basketball World Cup in China, where the Americans were a disappointing seventh.

Brooklyn’s James Harden also intends to play and has made that commitment to USA Basketball, though there is concern over whether his hamstring injury — which sidelined and slowed him at times during the Nets’ postseason run — will actually allow him to be part of the team.

The Americans start training camp in Las Vegas on July 6.