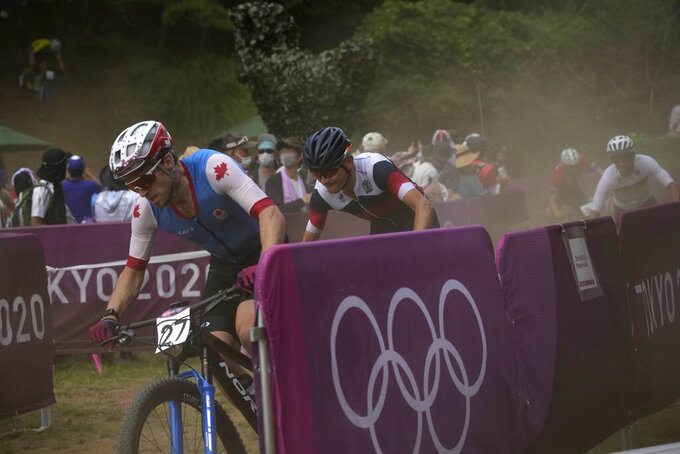 IZU, Japan (AP) — Tom Pidcock's golden dreams were nearly dashed on a road in the French Pyrenees, where the British cyclist had been putting in some training in the weeks leading up to the mountain bike race at the Tokyo Olympics.

The 21-year-old multidiscipline star was going down a sharp descent when he was hit by a car, sending him catapulting over the vehicle and breaking his bike into two pieces. Pidcock was taken to the hospital and underwent a battery of tests, but escaped any internal injuries and the worst of the wounds was a broken collarbone.

He was back on his bike a week later. He was at the Olympic starting line southwest of Tokyo on Monday.

He was at the finish line before anyone else, too.

Leaving reigning champion Nino Schurter and his Swiss teammate Mathias Flueckiger behind on the fourth of seven laps, Pidcock cruised to the first medal in mountain biking for Britain — a nation that has a storied history on the road and for years has dominated on the track, but hasn't been so good when the course turns to dirt.

“The last week I knew I was in really good shape, but there was still a lot of doubt in my mind," said Pidcock, who won the prestigious road race Brabantse Pijl earlier this year. “I just didn't know if I would have my best shape.”

Turns out he was better than ever.

“I knew he was going to be one of the favorites,” said Flueckiger, who gave chase in vain and was left with a silver medal around his neck. “He had a really good race and I'm sure he's really happy.”

David Valero Serrano of Spain capped off the podium finishers with a surprising bronze medal.

Olympic organizers originally wanted to carve out a mountain bike course at Yumenoshima, a district in Tokyo, on an artificial island built upon landfill waste. But the idea was scrapped for a multitude of reasons, including topography, and the site shifted 150 kilometers southwest of the Japanese capital to the heavily forested Shizuoka prefecture.

There, South African course designer Nick Flores — who also masterminded courses for the 2012 and 2016 Games — found a perfect canvas featuring dramatic elevation changes, gnarly sections of root and rocks and plenty of problems for riders.

As expected, the heat turned out to be one of them.

Despite some light breezes cast ahead of the approaching Typhoon Nepartak, which could make landfall Tuesday and drench the women’s race, the men found a mixture of dirt, gravel and asphalt baking in the summer sun.

They also found fans lining the course. Like the road racers before them, mountain bikers benefited from the fact that strict COVID-19 protocols that have barred fans from most Olympic venues do not extend past the Tokyo environs.

Several responded to their warm welcome from the Japanese people by popping wheelies during introductions.

The field of 38 riders, much smaller than a typical World Cup race, was trimmed to a selection of 10 on the short opening circuit before the main loops began. Missing the break was Jordan Sarrou, the world champion from France.

Another of the favorites, Mathieu van der Poel, crashed hard over a rubble-strewn downhill stretch on the first of the seven technical loops. The Dutch rider, whose Olympic tune-up consisted of a Tour de France stage win and six days in the yellow jersey, was left clutching his ribs at the base of the hill and eventually dropped out of the race.

Schurter went to the front on the second lap and began to hammer out the pace.

He was followed by Flueckiger, his countryman who has long ridden in Schurter’s shadow, along with Pidcock and Anton Cooper in a four-man breakaway. They traded turns at the front, putting distance between themselves and the field.

Then it was Pidcock who went on the attack. At one point he unleashed an acceleration so striking that Schurter, one of the greatest mountain bikers in history, nearly had his wheels slip out from under him as he tried to answer it.

“When he attacked, I got on the defensive and I couldn't do my race,” said Schurter, who has a medal of each color from the last three Olympics, but missed an opportunity to tie the mountain bike record with a fourth on Monday.

Instead, Schurter slowly drifted backward as Pidcock and Flueckiger made it a two-man race.

Pretty soon, Pidcock was all alone.

With his effortless climbing, daredevil descents and composure belying his 21 years, Pidcock left the world’s best gasping for air behind him. The rider from Leeds, whose prep for Tokyo included a homemade heat chamber in his spare bedroom that kept tripping his electricity, built a 14-second gap on Flueckiger heading into the final 4.1-kilometer lap.

The only races left were for silver and bronze.

“I was just telling myself I was going to be an Olympian. Now I'm an Olympic champion,” Pidcock said. “It's incredible.”