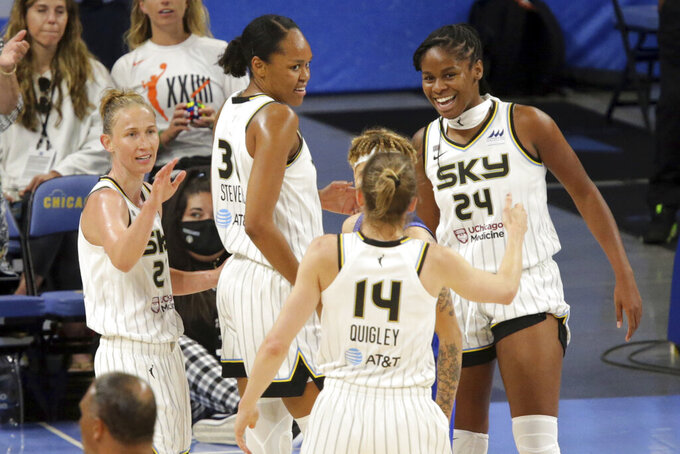 NEW YORK (AP) — The Chicago Sky are at full strength and moving up the WNBA standings after injuries got them off to a slow start.

Chicago (7-7) has won five in a row heading into Tuesday night's road game in New York. It's no coincidence that the return of Candace Parker and Allie Quigley has buoyed that winning streak.

Parker missed seven games with an ankle injury suffered in shootaround while Quigley was sidelined with a hamstring issue. Stefanie Dolson also missed a few games while helping the U.S. qualify for the 3x3 at the Olympics.

Now with everyone back, the Sky have been able to consistently win.

“We got our swag back,” said leading scorer Kahleah Copper. “We’re not on the court playing not to lose. We are going out there being tough and knowing we can win this game."

Chicago has been using a balanced offense with six players averaging in double figures this season.

The Sky will be tested with a five-game road trip beginning with two against the Liberty. The trip got off to an inauspicious start with a five-hour plus travel delay getting to New York on Monday.

Buoyed by the winning streak, the Sky vaulted up to third from 10th in the AP power poll this week.

1. Seattle (12-2): The Storm finished an unbeaten five-game road swing with two victories at Indiana. They are clicking on both offense and defense.

3. Chicago (7-7): Courtney Vandersloot is averaging 12.1 points and a WNBA-best 8.5 assists. She’s a big reason the Sky are sharing the ball so well with 19.9 assists per game — fourth best in the league.

4. Connecticut (8-5): The Sun welcome back coach Curt Miller, who missed a few games to be with his mom after she suffered a stroke. Connecticut is still missing Jonquel Jones, who is playing for Bosnia and Herzegovina in the FIBA European Championships.

5. New York (7-6): The Liberty went 2-2 on a west coast swing and welcomed the return of Sabrina Ionescu from an ankle issue.

6. Washington (6-6): The Mystics keep losing players to injury, but are finding ways to win. Theresa Plaisance stepped up last week, averaging 20.5 points, 9 rebounds and 3.5 assists to help Mystics go 2-0. The Mystics lost Myisha Hines-Allen to an injury as well as Natasha Cloud. Washington signed former AP college player of the year Megan Gustafson on Sunday with a hardship exemption.

8. Phoenix (6-7): Diana Taurasi hopes to be back from a fractured sternum injury when the Mercury play Los Angeles on Sunday. She’s played in just four games this season, averaging 15.8 points, 3.8 assists and 3.5 rebounds

9. Minnesota (5-7): Since winning three in a row, the Lynx have lost three of their last five games.

10. Atlanta (5-7): The Dream lost guard Tiffany Hayes to a grade 2 MCL tear and she'll be sidelined until after the Olympic break.

11. Los Angeles (5-7): Erica Wheeler had the first two double-doubles of her career, but it wasn't enough to help the Sparks avoid consecutive losses to Phoenix and New York.

12. Indiana (1-14): The Fever have dropped 10 straight games since their lone win of the season over Washington. The team will try and end that skid during a four-game homestand that starts Thursday against Dallas.

PLAYER OF THE WEEK:

Kelsey Plum of Las Vegas had a stellar week averaging 25 points, 4.5 rebounds and 4.5 assists to help the Aces sweep a pair of games from the New York Liberty. Plum scored a career-high 32 points in the first victory over the Liberty. Other players receiving votes this week included Courtney Vandersloot of Chicago, Breanna Stewart of Seattle, Theresa Plaisance and Tina Charles of Washington.

The U.S. announced its 12-player roster for the Olympics on Monday and Sue Bird and Diana Taurasi will be trying for their fifth gold medal in Tokyo. The two five-time Olympians were joined by other veterans Sylvia Fowles, Tina Charles, Brittney Griner and Breanna Stewart. The Americans also have six Olympic newcomers headlined by reigning WNBA MVP A'ja Wilson.

STAT OF THE WEEK:

Storm at Aces, Sunday. The top two teams in the league will meet for the final time during the regular season. They split their first two meetings to open up the season in Seattle.