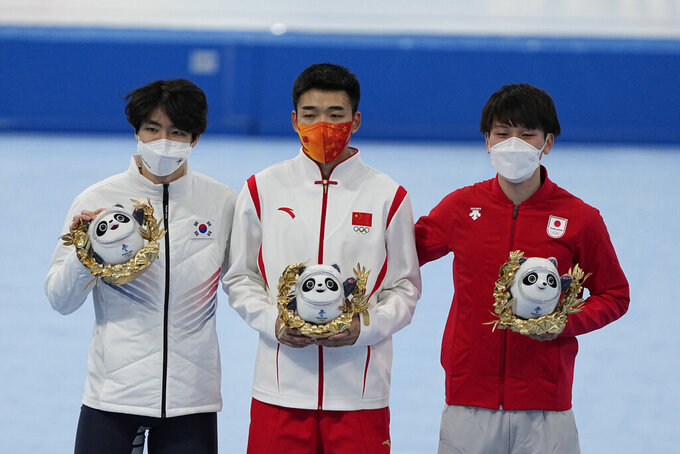 Gao Tingyu of China poses during a medal ceremony after winning the gold medal and setting an Olympic record in the men's speedskating 500-meter race at the 2022 Winter Olympics, Saturday, Feb. 12, 2022, in Beijing. Left is silver medalist Cha Min-kyu of South Korea and right is bronze medalist Wataru Morishige of Japan. (AP Photo/Ashley Landis)

BEIJING (AP) — When the last pair crossed the line, the excruciating wait finally over, Gao Tingyu was swallowed by his teammates and coaches.

Then he grabbed a Chinese flag and took off on a sprint around the infield at the Ice Ribbon, the striking red banner fluttering behind his head.

When he pulled up alongside the finish line, Gao let out a scream that could be heard throughout the only new venue built in Beijing for this year's Winter Games.

Finally, a Chinese man has won speedskating gold at the Olympics.

Not bad for a guy who calls himself lazy.

“I'm quite a slow person,” Gao said through a translator. “But for speedskating, I really love speed. I also like the sound of air beside my ear when I skate. It feels exciting.”

Gao felt plenty of excitement Saturday, setting an Olympic record with his victory in the 500 meters.

It took a while for the celebration to begin, however.

The 24-year-old Gao skated in the seventh of 15 pairs, posting a blistering time of 34.32 seconds. Then he waited nervously on the infield as 16 other skaters took aim.

No one could beat it.

“It felt like I was riding a roller coaster,” Gao said. “When I finished my race, there are 16 people behind me and all of them are great. I felt some pressure until the last group of people.”

Gao knew he had at least a medal for the second straight Olympics after the next-to-last pair crossed the line. But the real celebration began when the final group finished.

“This is different from four years ago," he said “This time it comes to our home country. I felt excited and nervous. I think this is a good mentality for the competition, especially for such a big event.”

Zhang Hong had been China's only speedskating gold medalist. She won the women’s 1,000 eight years ago in Sochi.

“I want to give my medal to my country,” Gao said.

When Gao's name was announced at the venue ceremony, a prelude to the medal festivities later in the evening where he was actually receiving his gold, he hopped joyfully onto the top rung of the podium, throwing both arms skyward.

“Gao was impressive,” said 2018 gold medalist Haavard Lorentzen. “He’s been a big favorite all season since he skated so fast in the first World Cup. He raced so fast that everybody thought it would be impossible to beat him at the Olympics. It’s cool to see that he succeeds on home soil.”

The silver went to Cha Min Kyu of South Korea, whose time of 34.39 gave him a matching medal to the one he earned four years ago in Pyeongchang.

Wataru Morishige of Japan took the bronze in 34.49, completing an Asian sweep of the podium.

It was the first time in Winter Games history that three different Asian countries claimed medals in an event.

“The people back home were really hopeful and doing things like making posters for me. It was really encouraging to see that," Morishige said. "I’m glad I could deliver a bronze medal to them.”

“It’s challenging to come into the race as the reigning Olympic champion,” Lorentzen said. “My physical shape is good but my body is not 100%.”

Reigning world champion Laurent Dubreuil just missed out on the podium, finishing fourth in 34.552. He shook his head dejectedly when he saw the time on the scoreboard.

“It’s not as if it was a bad race by any means," Dubreuil said. “It was a good race, but it wasn’t a great race — and I needed a great race today. It’s very disappointing, but I did the best I could.”

The race got away from Dubreuil on his sprint to the first turn. His opening split of 9.63 was 0.21 slower than Gao's.

The start of the competition was delayed about 20 minutes by a problem with the ice. Workers patched a spot in the corner, and the Zamboni had to be brought out again to smooth things out.

“It’s tough, especially on the 500 where you have so much of the adrenaline going,” Lorentzen said. “But most skaters were able to perform as well as they could.”

Also Saturday, Japan set an Olympic record in the quarterfinals of the team pursuit.

Japan broke its own Olympic mark with a time of 2 minutes, 53.61 seconds, advancing to Tuesday's semifinals as the top qualifier. They will be paired with the fourth-fastest qualifier, the Russian team (2:57.66).

China and Norway were relegated to the C final. Belarus and Poland will meet in the D final.

The U.S. women did not qualify for the event.