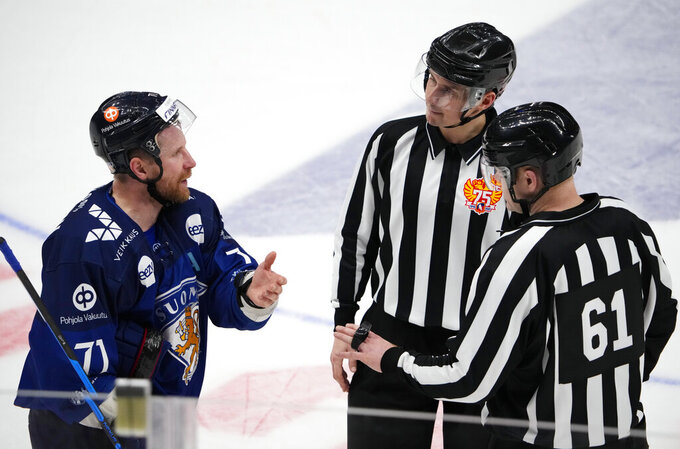 FILE - Finland's Leo Komarov speaks with referees during the Channel One Cup ice hockey match between Russia and Finland in Moscow, Russia, Sunday, Dec. 19, 2021. Leo Komarov is expected to play for Finland at the Olympics after the NHL decided not to send players to Beijing. Komarov played in the NHL as recently as October, and he and the New York Islanders agreed to mutually terminate his contract in November.(AP Photo/Alexander Zemlianichenko, File)

Komarov is the most recent to play in the NHL, dressing for one game for the New York Islanders in October. Filppula, Vatanen and Lehtonen were in the NHL last season.

Finland has 12 players with NHL experience. Filppula is the most accomplished with 616 points in 1,222 regular-season and playoff games and a Stanley Cup championship with Detroit.

Vatanen,, 30, and Komarov, who turns 35 Sunday, were part of Finland’s bronze medal-winning team in Sochi in 2014. Filppula won bronze at the 2010 Vancouver Games.

Harri Sateri is expected to be Finland’s starting goaltender. He played nine games for Florida during the 2017-18 season.

Seven players are back from the 2018 Olympic team, when Finland lost to Canada 1-0 in the quarterfinals.

Coach Jukka Jalonen called it an experienced and competitive team. Unlike the U.S., which has eight players under age 21, Finland skewed older: 26-year-old forward Hannes Bjorninen is the team's youngest player on the team picked by general manager and former NHL winger Jere Lehtinen.

Finland is set to travel to Beijing Feb. 2 and play Switzerland in an exhibition game Feb. 6 before opening the tournament against Slovakia on Feb. 10. Finland is in a group with Slovakia, Latvia and archrival Sweden.