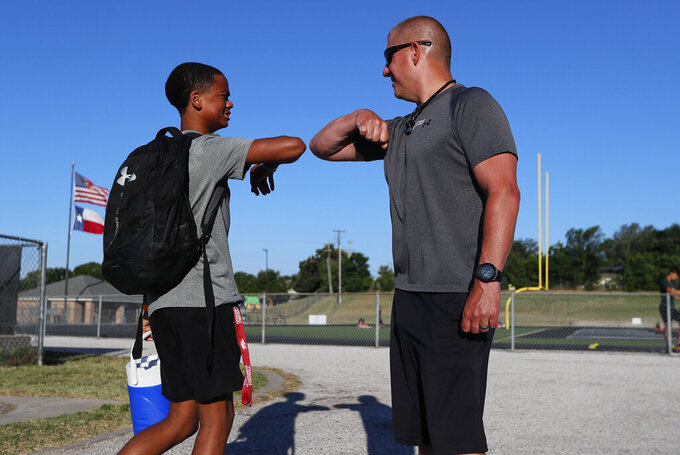 Head football coach Bob Wager, right, and sophomore safety Cameron Conley greet each other at the re-opening of strength and conditioning camp at Arlington Martin High School, Thursday, June 18, 2020, in in Arlington, Texas. While states have been easing the economic and social lockdowns prompted by the coronavirus pandemic, some are now letting high school athletes return for summer workouts before teachers have even figured out how they are going to hold classroom instruction. (AP Photo/LM Otero)

Caleb Paine, the only American sailor to win a medal in the last two Olympics, says he’s ending his campaign for the postponed Tokyo Games to focus on the America’s Cup.

Paine, of San Diego, rallied to win bronze in the Finn class at the 2016 Rio Games. It came after the Americans were shut out of the medals at London four years earlier.

He says he’s been talking with family members and mentors since the Tokyo Games were postponed a year due to COVID-19 and calls it a “very difficult decision.”

After medaling at Rio, Paine was named US Sailing’s Rolex Yachtsman of the Year, the highest honor awarded to American sailors each year. He's also a five-time World Cup medalist and recently won gold at the 2020 Hempel World Cup Series Miami.

Paine is a crewman with American Magic, the New York Yacht Club’s entry in the 36th America’s Cup. Competition is currently scheduled to begin with a preliminary regatta in mid-December in Auckland, New Zealand.

Two preliminary regattas in Europe were canceled due to the coronavirus pandemic.

Five more Baylor athletes have tested positive for COVID-19, making it eight positives from among 109 tests conducted in the process of returning to campus for voluntary workouts and conditioning.

There was no breakdown by sport, but the school said of the eight athletes who tested positive, four were showing symptoms and the other four were asymptomatic. Some of the 109 athletes tested so far weren’t yet at the Texas school.

Under Baylor’s prevention and response protocols, including current CDC guidelines, the athletes who tested positive went into self-isolation. Other athletes identified by contact tracing as having potential direct exposure are being instructed to self-quarantine.

Chicago State is dropping its baseball program to save an estimated $500,000 a year and will replace it with men’s soccer.

The Cougars, who have never had a winning season in baseball since elevating to Division I in 1989, are the second Division I school to eliminate baseball since the coronavirus pandemic began causing financial stress for universities and their athletic departments. Furman dropped baseball last month.

Chicago State owns several NCAA records for futility. The Cougars lost 53 games in 2007 and had three other seasons with 50 or more losses. They never won more than nine games in a season between 2002-11 and in 1999 allowed a record 50 runs in a loss to Nebraska.

The Cougars also faced high travel costs associated with playing in the Western Athletic Conference. Their closest league opponent was Northern Colorado, 975 miles away, and trips to the West Coast were common. Their conference record since joining the WAC in 2014 was 35-105-1.

Eales said Monday the two players who have tested positive are in isolation but are expected to be with the team for the MLS Is Back Tournament in July at Walt Disney World.

Eales says the tests of asymptomatic players are evidence the protocols set up by MLS “are working.”

The players who tested positive last week have not been identified.

Eales says the team “can’t control the environment outside of training” in Atlanta. He says he expects “a slightly different scenario” in Orlando “because it’s a more contained environment.”

Ravens coach John Harbaugh is confident his team’s training camp will begin as scheduled next month despite the coronavirus pandemic.

Speaking on a video conference on Monday, Harbaugh said he expected the NFL would have a plan in place that would enable teams to start practicing in late July.

“We’ll just have to be very adaptable, and flexible and smart about what we’re going to do,” Harbaugh said, adding that testing was the main thing.

The Ravens have replaced 13 scheduled on-field practice sessions with virtual classes so far this offseason.

That accounts for nearly one-quarter of the 40 tests conducted in that time frame. Since the beginning of the return-to-campus protocol May 29, there have been 12 positives among 386 tests.

The athletic department said contact tracing has begun. Individuals who test positive are being isolated, and a quarantine is in place for individuals who might have been exposed to someone with COVID-19.

“While we have experienced an increase in positive tests, almost all are related to individuals who had been in quarantine due to our contact tracing and developed symptoms,” stated Dr. Andrew Peterson, head team physician. “Our overall process, including testing and daily health screening, is working as expected.”

Players of Brazilian soccer giant Corinthians visited the club on Monday to pick up personal protection equipment against COVID-19 after tests showed 21 out of its 27 players had contracted the disease.

The São Paulo-based club said Sunday that 13 players are fully recovered, but eight will not be allowed to start training on July 1 because of the disease.

Corinthians tested 190 people, including players, staffers and their families. The club did not name the players who tested positive.

Brazil is Latin America’s hardest hit country by the new coronavirus, with more than 50,000 deaths and 1 million confirmed cases.

The National Hockey League has begun winnowing its possible locations to resume the season amid the COVID-19 pandemic.

The Blue Jackets were informed Monday that Columbus will not be one of the NHL’s hub cities. Columbus was one of 10 finalists, including seven in the U.S.

Wisconsin officials say that two Badgers’ athletes have tested positive for COVID-19 and are self-isolating.

Those positive results came from the 117 athletes who participated in the school’s initial campus screening. The Wisconsin athletic department’s infection response team is monitoring the recovery of the athletes but didn’t specify which teams the two play for.

Wisconsin plans to release the aggregate number of positive tests at regular intervals during the initial phase of athletes’ return to campus.

Boston College says its football players began returning to the school Monday as part of its COVID-19 operational plan to bring all its student-athletes back to campus.

The school says its new protocols include limiting personnel at facilities, mandating face coverings be worn in common areas, as well as daily temperature checks for staff and athletes. Increased cleaning measures will also be in effect at all facilities.

The protocols are being done in accordance with all federal, state, medical and university guidelines to begin voluntary workouts.

Regardless of home state, all athletes will be required to self-quarantine upon arriving on campus for a maximum of 14 days. Quarantine time may vary based on additional guidance from the state and the phase of reopening in Massachusetts.

All athletes will be tested for COVID-19 on or about Day 8 of quarantine. Protocols are also in place for the quarantine and treatment of positive COVID-19 cases should they occur.

Coach Greg Schiano discussed the test results Monday during a conference call. It was his first media availability since the team was allowed to return to campus last week for voluntary workouts.

Schiano said players and coaches were tested before the team returned on June 15, either with mail-in tests or after being tested locally. One of the positive tests came from those samples and the player was not allowed to return to campus and is being isolated at home.

The second positive test came from a sample taken when the players reported. That player was isolated and three players who had contact with him were placed in quarantine.

The university has a protocol for allowing players who test positive to eventually return, which includes a non-positive test, Schiano said.

Incoming freshmen players also were allowed on campus on Monday and they were tested and put in a separate dormitory. They will not be integrated with the rest of the team until they pass a second COVID-19 test.

The workouts are voluntary and Schiano said some players have elected to skip them.

The ATP men’s tennis tour says it is continuing to “plan and adjust” its precautions and protocols related to the coronavirus pandemic with an eye to its planned Aug. 14 resumption of competition.

The tour issued a statement Monday following word that two top-35 players tested positive for COVID-19 after participating in unsanctioned exhibition matches organized by No. 1 Novak Djokovic in Serbia and Croatia.

There were no social distancing measures observed at the Adria Tour exhibitions.

Three-time Grand Slam semifinalist Grigor Dimitrov, who is currently No. 19, and his opponent in Croatia on Saturday, No. 33 Borna Coric, both said they have COVID-19.

The ATP said it “continues to urge strict adherence to responsible social distancing and health and safety guidelines to contain the spread of the virus.”

Exhibition events have been staged in various places around the world while the ATP and WTA tours have been suspended since March because of the pandemic. The tours announced last week they plan to return in August.

Louisville football’s season opener against North Carolina State has been moved up a day to Wednesday, Sept. 2 to avoid conflicting with the rescheduled Kentucky Derby weekend at neighboring Churchill Downs.

The Kentucky Oaks and Derby were postponed from May 1-2 to Sept. 4-5 because of the coronavirus pandemic. The preceding and highly attended Thursday race card known as “Thurby” was set for the same day as the Cardinals’ Atlantic Coast Conference matchup against the Wolfpack, but the schools announced Monday that they had agreed to the switch to avert logistical conflicts with parking and traffic.

“We appreciate the NCAA, ACC and N.C. State honoring our request for a date change for the opening game,” Louisville athletic director Vince Tyra said in a news release. “We are trying to be thoughtful about the shared city resources needed to host a football game and Thurby at the same time.”

The club says the players are feeling fine and remain in isolation.

Four of the players have displayed symptoms of COVID-19 while one has shown no symptoms at all.

The club says the five players did not attend the match against Proleter on Saturday when the Serbian league champions completed their season.

About 20,000 fans attended a Serbian Cup semifinal match against Partizan Belgrade this month as the country lifted most of its COVID-19 restrictions.

The match against Proleter was also attend by about 20,000 fans. Both gatherings have drawn criticism from the public as Serbia records dozens of new coronavirus cases each day.

Croatian tennis player Borna Coric says he has tested positive for the coronavirus after taking part in an exhibition event.

He says “I want to inform you that I am positive for Covid-19. Please everyone who has been in contact with me for the last few days gets tested!”

He says he is feeling well and has no symptoms.

Coric was among about 1,000 people who were tested for the virus after Grigor Dimitrov announced that he tested positive. That led to the cancellation of an exhibition event in Croatia where top-ranked Novak Djokovic was scheduled to play in the final.

Coric played a match against Dimitrov in Zadar on Saturday in the second leg of the exhibition series.