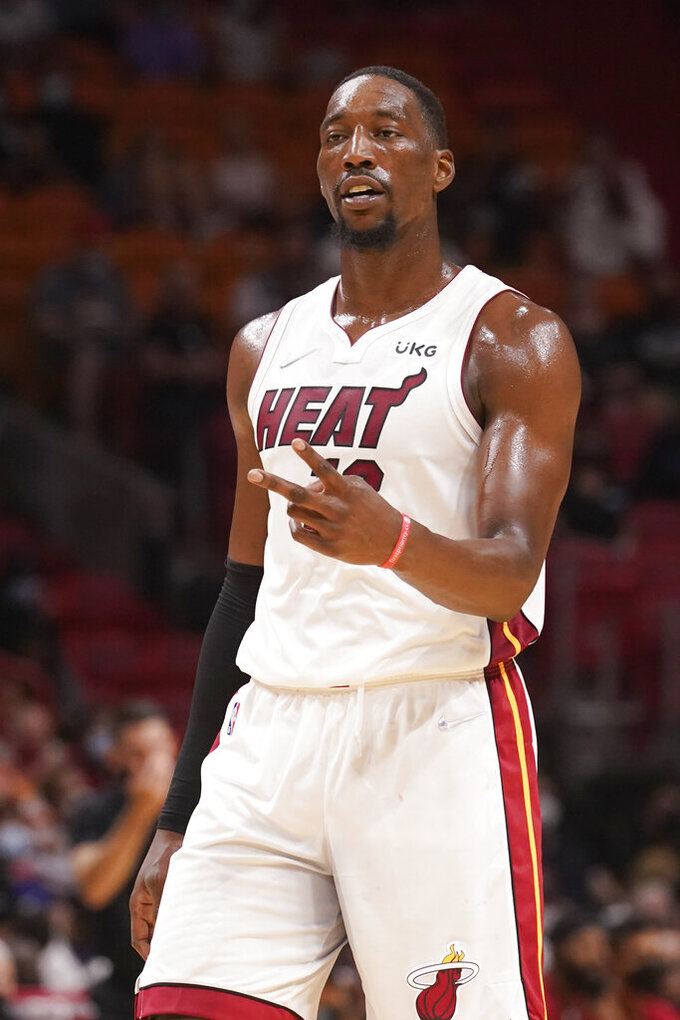 Miami Heat center Bam Adebayo (13) gestures after scoring during the first half of a preseason NBA basketball game against the Atlanta Hawks, Monday, Oct. 4, 2021, in Miami. (AP Photo/Marta Lavandier)

MIAMI (AP) — Bam Adebayo walked off the court after the gold-medal game at the Tokyo Olympics back in August, proudly having draped the U.S. flag over his shoulders, and asked a question on his way toward the winning locker room.

He’ll never have to ask that again.

The Heat hang banners to commemorate when members of the team win Olympic gold medals, and Adebayo’s was unveiled Friday night in a ceremony at halftime of Miami’s game against the Charlotte Hornets. His is the fifth now swaying from the rafters, joining ones paying tribute to Olympic successes by Alonzo Mourning, Tim Hardaway, Dwyane Wade and LeBron James.

Adebayo said he went to the Olympics with the goal of bringing gold back to Miami, a city that was reeling this summer after a condo collapse in Surfside, Florida, a waterfront town just a few miles north of downtown Miami. The middle-of-the-night crumbling of that building caused 98 deaths.

Adebayo visited the site just before leaving to join USA Basketball for the summer, and said it was on his mind throughout the Olympics.

“It was an incredible accomplishment,” Heat coach Erik Spoelstra said of Adebayo being part of the gold experience. “Thinking about where he’s come from and his journey to get to that point, to be in a position to help the U.S. Olympic team win a gold, that’s really amazing.”

A pair of Adebayo’s Heat teammates, Jimmy Butler and Kyle Lowry, have also won Olympic gold for the U.S. They don’t have banners because they were not members of the Heat when they won those medals.

The Heat unfurled a U.S. flag at midcourt for the brief ceremony. Adebayo — his mother joining him on court for the moment — donned his gold medal for the occasion, then smiled and lifted his arms skyward as gold streamers fell from the ceiling and banner was finally displayed.

“We don't get a lot of Olympic gold medals where I come from," Adebayo said. “Glad to represent my city, my home and this organization."

Adebayo averaged 6.3 points and a team-best 5.7 rebounds on 57% shooting at the Tokyo Games. He was one of only three players -- Kevin Durant and Damian Lillard were the others -- to start all six games at the Olympics for the team coached by Gregg Popovich.

“He was a joy in every way,” Popovich said earlier this month of having Adebayo on the Olympic team.

Adebayo had six points, six rebounds and four assists in the gold-medal game win over France, a victory where the Americans avenged a loss to open the Olympics.

“Bam’s a student of the game, but also of Miami Heat history,” Spoelstra said. “He’s seen the banners go up. That means something to him.”