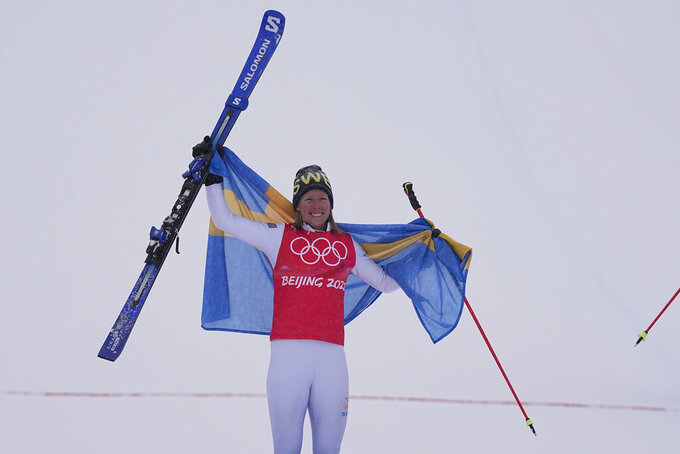 Naeslund opened up a lead and held off Canada’s Marielle Thompson on a snowy day along the winding course filled with bumps and jumps. Canada had won every gold in the women’s version of the race since the discipline's Olympic debut at the 2010 Vancouver Games.

“I just was here to show what I can do,” Naeslund said. “I’m so happy that I managed to ski so well all day.”

The third-place finisher was Fanny Smith of Switzerland, but after a delay, the bronze was awarded to Daniela Maier of Germany. Replays indicated that Smith moved her left ski directly into the line of Maier, and Maier briefly lost her balance. Maier fell two body lengths behind and couldn’t catch up. Following the review, Smith’s place was listed as “RAL” — ranked as last.

“I tried to be OK with fourth place. I was very disappointed I have to say, but (then) the jury decided it that way,” Maier said. "I am really sorry for Fanny that it’s like this. The jury have decided it, so I have to accept it and be happy with the medal.”

Naeslund didn't understand what the jury was looking at — or, really, the decision.

“But I haven’t looked at it,” Naeslund said. "I’m sad for Fanny and I’m happy for Dani. Sometimes it takes time but not this long, but I guess it’s also the Olympic final so for sure they want to do it right.”

For Thompson, the silver pairs with the gold she earned at the 2014 Sochi Games. For the medal haul, she credits her strong team, which has earned six of the 12 Olympic medals handed out in the women's event.

“Everyone’s really been chasing us, so we’ve had to continue to be better, but on the women’s side, we are always pushing each other every step of the way,” Thompson said. “Hopefully we can continue to be the innovators in the sport and continue to be strong.”