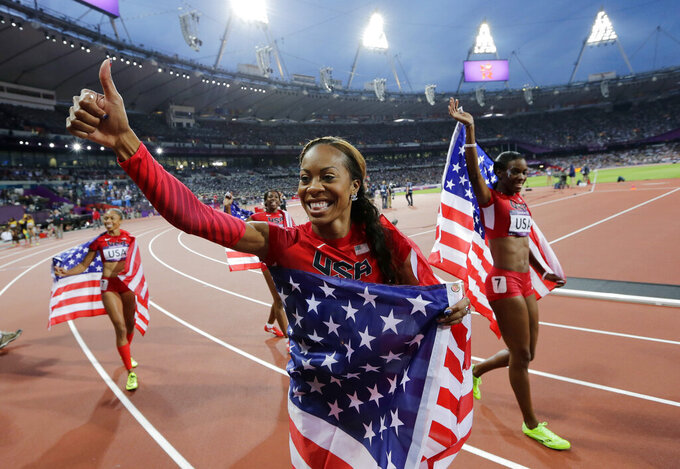 FILE- In this Aug. 11, 2012, file photo, United States' Deedee Trotter, right, Sanya Richards-Ross, front center, and Allyson Felix, back left, celebrate winning gold in the women's 4x400-meter relay final during the athletics in the Olympic Stadium at the Summer Olympics in London. Richards-Ross will provide fashion and lifestyle commentary of the Kentucky Derby on NBC on May 1. The network is announcing her addition to its coverage Tuesday morning. April 20, 2021. (AP Photo/David J. Phillip, File)

The network is announcing her addition to its coverage Tuesday morning. Richards-Ross won gold in the 400 meters at the 2012 London Olympics and holds the U.S. record at that distance.

She has never attended the Kentucky Derby until now. Fans are returning to Churchill Downs in a limited capacity after the 2020 Triple Crown was run in front of empty grandstands in Louisville, Baltimore and New York.

Richards-Ross, who won her other three Olympic golds in the 4x400m relay, hosts a weekly lifestyle show on Fox.