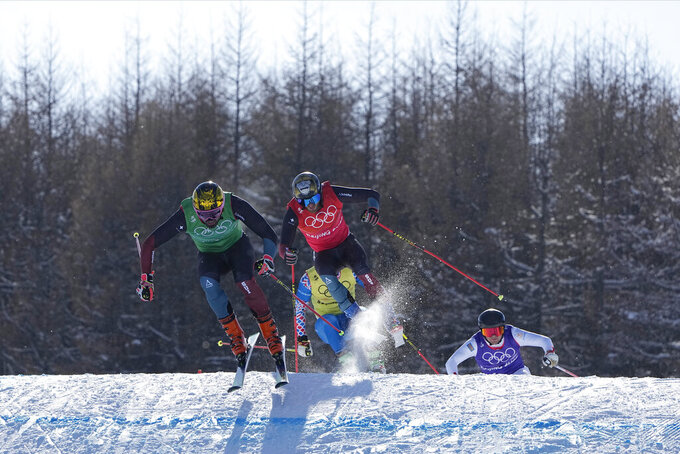 ZHANGJIAKOU, China (AP) — Ryan Regez went from downhill skier to apprentice as a structural draftsman to skicross racer to his latest endeavor — an Olympic gold medalist.

“What a crazy way,” he said of his unconventional journey. “I think it’s more likely to be struck by lightning — twice.”

Regez led a 1-2 finish by Switzerland in the skicross final on Friday at Genting Snow Park. The 29-year-old grabbed the lead early and never relinquished it along a course filled with bumps, jumps and rolling terrain. He raised his arms in triumph shortly after crossing the finish line.

“It’s kind of incredible,” Regez said. “The whole week of training, I’ve been so nervous and had so much pressure on myself because everyone was expecting me to come here and win.

Try as he might, Fiva just couldn't catch up to Regez, who opened up a pretty sizeable lead by skicross standards. The last thing Fiva wanted to do was take a big risk and possibly cause a crash that would take both of them out of the medals.

“When I realized Ryan was in front, I kind of stepped a little off the gas to be sure of not crashing inside of him, and pass somewhere on the flat section. But then I made too many mistakes,” Fiva explained of his strategy. "I’m definitely happy for him. He’s a crazy cool guy. Really strong skiing.”

“I’m very satisfied with the job I’ve done, and I’m very happy with it,” Ridzik said. “I’m very tired and I can barely stand and I want to sit down. It was really hard today.”

As a kid, Regez always thought his future was in Alpine skiing. More specifically, the speed events. But that didn't pan out — not the way he was envisioning, anyway.

So his next option was an apprenticeship as a structural draftsman. But he discovered skicross, which paid off in gold.

Does that mean his career as a structural draftsman remains on hold?

“Depending on how well my sports career goes, I don’t have to go back to it,” he cracked.

In the small final, Italian skicross racer Simone Deromedis won the heat with a little bit of flair. He was coming off the last jump and did the splits before crossing the finish line.

“I don’t know what went through my mind, but when I arrived at the bottom I saw I had some space and that came naturally,” Deromedis said. "Don’t ask me why I did that.”