At swimming trials, Ledecky keeping an eye on NHL playoffs 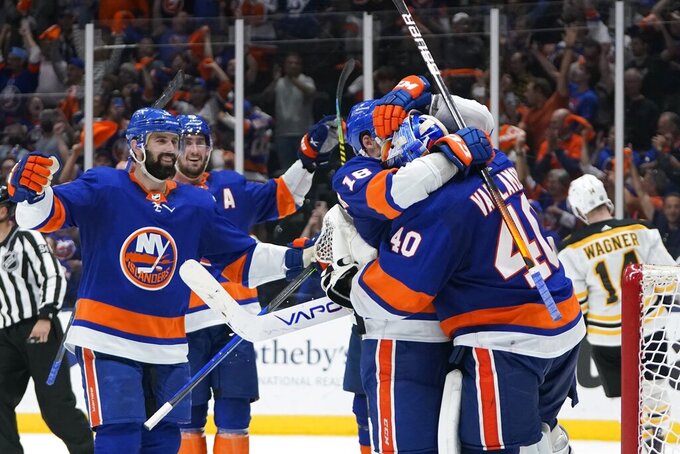 OMAHA, Neb. (AP) — Even as she attempts to qualify for her third U.S. Olympic team, champion swimmer Katie Ledecky is keeping an eye on the NHL playoffs.

Her uncle, Jon Ledecky, is a co-owner of the New York Islanders. The team has advanced to the final four of the Stanley Cup playoffs, facing the Tampa Bay Lightning in a best-of-seven series for the chance to take on either Las Vegas or Montreal in the final.

Katie Ledecky will be watching from Omaha, where she is competing in the U.S. Olympic swimming trials that also begin Sunday.

“I actually will be able to because I don’t have a race” on the opening day of the meet, she said. “I’m thrilled. It’s so exciting.”

The Islanders are attempting to capture their first Stanley Cup since 1983, when a dynasty led by Mike Bossy, Bryan Trottier and Denis Potvin won the last of four straight championships.

“I love the Islanders,” Katie Ledecky said. “I’ve watched I think almost every regular-season game this year. During the pandemic, I made sure I was able to watch the games because it provided a little bit of entertainment. So I’m a big fan of the team and I’ll be cheering them on.”

The 24-year-old Ledecky is expected to be one of the biggest stars at the Tokyo Olympics. She won four golds and a silver at the 2016 Rio Games.

Jon Ledecky is planning to be in Omaha for at least some of his niece's races, she said.

“I think he’s doing a little bit of back and forth this week, which will be interesting,” Katie said.

The Islanders are planning to move into a new arena at Belmont Park next season.

“Obviously, I can’t go to any games right now, but in the fall they’re opening up a new arena, so I’m hoping I can go to some of those games in the fall,” Katie Ledecky said.

For now, she's focused on swimming — and a bit of playoff hockey from afar.