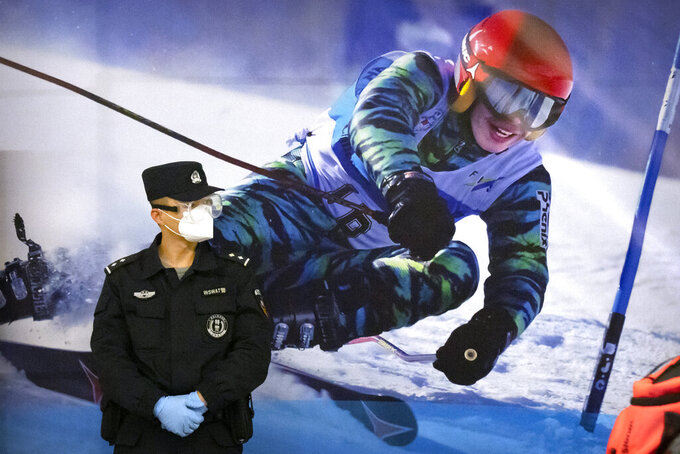 FILE - A police officer wearing a face mask and goggles to protect against COVID-19, stands near a poster of a skier on the wall at a train station in Zhangjiakou in northern China's Hebei Province, Friday, Nov. 26, 2021. China is threatening to take “firm countermeasures" if the U.S. proceeds with a diplomatic boycott of February's Beijing Winter Olympic Games. Foreign Ministry spokesperson Zhao Lijian on Monday accused U.S. politicians of grandstanding over the issue of not sending dignitaries to attend the events that China hopes will showcase its economic development. (AP Photo/Mark Schiefelbein, File)

WASHINGTON (AP) — The U.S. will stage a diplomatic boycott of the upcoming Winter Olympics in Beijing t o protest Chinese human rights abuses, the White House confirmed Monday, a move that China has vowed to greet with “firm countermeasures.”

White House press secretary Jen Psaki said U.S. athletes will continue to compete and will “have our full support,” but added “we will not be contributing to the fanfare of the games.”

“U.S. diplomatic or official representation would treat these games as business as usual in the face of the PRC’s egregious human rights abuses and atrocities in Xinjiang, and we simply can’t do that,” Psaki told reporters during Monday's briefing.

“We have a fundamental commitment to promoting human rights. And we feel strongly in our position and we will continue to take actions to advance human rights in China and beyond,” Psaki added.

The announcement came as Biden prepares to host a White House Summit for Democracy, a virtual gathering of leaders and civil society experts from more than 100 countries that is set to take place Thursday and Friday. The administration has said Biden intends to use the meeting “to announce both individual and collective commitments, reforms, and initiatives to defend democracy and human rights at home and abroad.”

Senate Foreign Relations Committee Chairman Robert Menendez, D-N.J., called such a diplomatic boycott “a necessary step to demonstrate our unwavering commitment to human rights in the face of the Chinese government’s unconscionable abuses.”

He called on “other allies and partners that share our values to join with the United States in this diplomatic boycott.”

Sen. Tom Cotton, an Arkansas Republican, however, said the diplomatic boycott amounted to a “half measure." American officials, including Biden, have criticized Beijing for human rights abuses against Uyghurs in northwest Xinjiang province, suppression of democratic protests in Hong Kong, military aggression against the self-ruled island of Taiwan and more. President Donald Trump's administration in its final days declared the abuses in northwest China “genocide.”

“The United States should fully boycott the Genocide Games in Beijing,” Cotton said. "American businesses should not financially support the Chinese Communist Party and we must not expose Team USA to the dangers of a repugnant authoritarian regime that disappears its own athletes.”

Cotton appeared to be referring to former Grand Slam doubles champion Peng Shuai, who dropped from sight after publicly accusing a former top Communist Party official of sexual assault. Concerns over her safety prompted the Women's Tennis Association to suspend events in China and provided added fuel to opponents of China's hosting of the games.

Psaki would not comment whether Biden weighed pulling athletes from the games — many of whom have been training for years for the moment to compete on the global stage. In 1980, in the midst of the Cold War, Jimmy Carter kept U.S. athletes home from the 1980 Summer Olympics in Moscow to protest the Soviet invasion of Afghanistan.

“I don’t think that we felt it was the right step to penalize athletes who have been training and preparing for this moment, and we felt that we could send a clear message by not sending an official U.S. delegation,” Psaki said.

Chinese Foreign Ministry spokesperson Zhao Lijian accused U.S. politicians of grandstanding over the issue of not sending dignitaries to attend events that China hopes will showcase its economic development and technological prowess.

Speaking to reporters at a daily briefing, Zhao said such a move would be an “outright political provocation,” but gave no details on how China might retaliate.

Human rights advocates and lawmakers in the U.S. who support a boycott say it is a necessary step. They cite China’s poor record on human rights as justification, saying China is using the games to whitewash its ill treatment of civil rights activists, political dissidents and ethnic minorities.

“Without being invited, American politicians keep hyping the so-called diplomatic boycott of the Beijing Winter Olympics, which is purely wishful thinking and grandstanding," Zhao told reporters at a daily briefing. “If the U.S. side is bent on going its own way, China will take firm countermeasures."

The International Olympic Committee in a statement called the decision to keep dignitaries away from the game a “political decision for each government” that it “fully respects.”

“At the same time, this announcement also makes it clear that the Olympic Games and the participation of the athletes are beyond politics and we welcome this,” the IOC statement said.

House Speaker Nancy Pelosi, who had been advocating for a diplomatic boycott for months, applauded Biden for taking the step. Still, she said the IOC “allowing a country notorious for its appalling human rights record to host the Olympics makes a mockery of the Olympic Charter, which states that the Games should seek to foster ‘respect for universal and fundamental ethical principles.’”

The dispatching of high-level delegations to each Olympics has long been a tradition among the U.S. and other leading nations. Then-President George W. Bush attended the opening of the 2008 Beijing Olympic Summer Games. First lady Jill Biden led the American contingent to the Summer Olympics in Tokyo this year and second gentleman Doug Emhoff led a delegation to the Paralympic Games.

The diplomatic boycott comes as the U.S. attempts to stabilize turbulent relations with Beijing, even as it maintains a tough approach toward trade and conflicts over China's actions on Taiwan, human rights, Hong Kong and the South China Sea. CNN was first to report that an announcement was expected this week.

Beijing has mounted a stiff response to all U.S. criticisms, denouncing them as interference in its internal affairs and slapping visa bans on American politicians it regards as anti-China.

It wasn't clear whom the U.S. might have sent to Beijing for the games and Zhao's comments appeared to indicate that China has not extended any invitations.

Australia, whose ties with China have nosedived over a range of disputes, has also raised the possibility of a diplomatic boycott.

Psaki said Biden and Chinese President Xi Jinping did not discuss a potential diplomatic boycott of the games when they spoke last month. She said Biden's decision to keep U.S. dignitaries home was conveyed to Beijing by aides before it was formally announced by the White House.