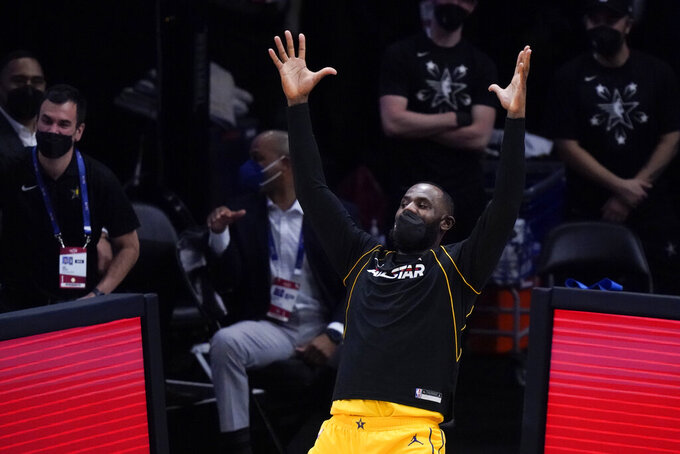 USA Basketball is a step closer to choosing the team that will play in this summer’s rescheduled Tokyo Olympics, releasing the names Thursday of 57 players who are part of the pool to fill the squad.

Among the group: 16 players who have already won Olympic gold medals for the U.S., including three-time gold winner LeBron James and two-time gold medalists Kevin Durant and Chris Paul.

It’s also already drawing major interest from some NBA stars who have yet to taste Olympic gold. Kawhi Leonard said this week he intends to play if healthy this summer, and Stephen Curry has long said he would like the chance to compete in the Olympics. Curry has won a gold medal in a Basketball World Cup, but never been on the Olympic stage.

There will be no tryouts. USA Basketball will pare the list to a 12-person Olympic team by early summer. Those decisions will be made by a selection committee and based in part on player availability and health. Training camp will start with player arrivals in Las Vegas on July 2 while the NBA playoffs are ongoing, and the Olympics start July 23. That’s just one day after the potential date of Game 7 of the NBA Finals.

The U.S. is scheduled to play as many as five games in Las Vegas before leaving for Tokyo on July 19. The Americans, who are seeking a fourth consecutive gold medal, open the Olympics against France on July 25.

James, if he chooses to play, could join Carmelo Anthony as the only men’s players to make four U.S. Olympic teams. He has said in recent months he will consider the opportunity, noting the lure of playing for U.S. coach Gregg Popovich is a factor.

“With the postponement of the Tokyo Olympics from 2020 to 2021, it’s important that we continue to remain flexible and consider all players who can contribute to our efforts to field the best USA team possible,” USA Basketball men’s national team managing director Jerry Colangelo said. “These additions we are announcing today will help ensure that we are doing that.”

Those additions, who were not part of the pool created in early 2020 in anticipation of an Olympics happening last summer, are: New Orleans’ Zion Williamson, Miami’s Duncan Robinson, Cleveland’s Jarrett Allen, Detroit’s Jerami Grant, Brooklyn’s Blake Griffin, Milwaukee’s Jrue Holiday, Chicago’s Zach LaVine, New York’s Julius Randle and Mitchell Robinson, Toronto’s Fred VanVleet, Atlanta’s Trae Young and the Houston trio of Eric Gordon, John Wall and Christian Wood. Jordan, who now plays for Brooklyn, is also a newcomer to the pool even though he was on the 2016 Olympic team.

All 44 players that were announced as part of the original pool last year remain, with two exceptions: Golden State’s Klay Thompson, who is recovering from Achilles surgery, and Boston’s Marcus Smart, who has battled injuries as well throughout much of this season.

“Having a larger player pool than what we normally have is critical because of all of the uncertainties we face about availability,” Colangelo said. “But for USA Basketball to receive the commitment of so many outstanding players remains an indicator of the great honor of representing your country means to these men.”