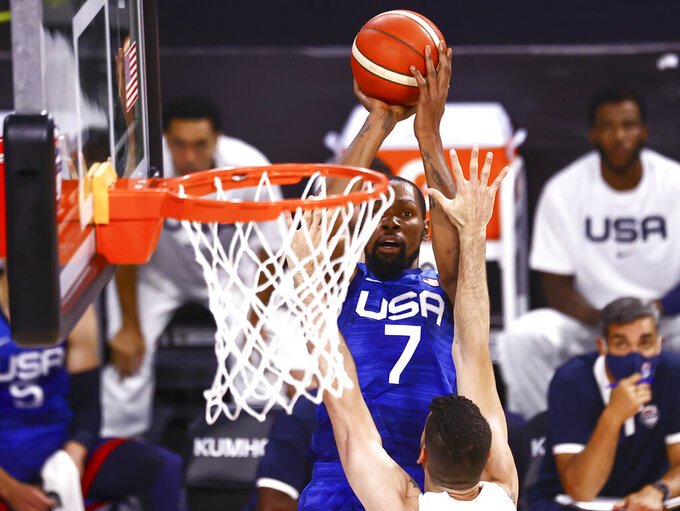 United States' Kevin Durant (7) shoots over Argentina's Patricio Garino during the first half of an exhibition basketball game in Las Vegas on Tuesday, July 13, 2021. (Chase Stevens/Las Vegas Review-Journal via AP)

Kevin Durant and Bradley Beal each scored 17 points and the Americans took control from the outset, beating Argentina 108-80 in Las Vegas on Tuesday to avoid what would have been the first three-game losing streak in this era of NBA players being able to represent USA Basketball on the international stage.

Zach LaVine scored 15 points for the U.S., which lost its first two games in Las Vegas to Nigeria and Australia. The Americans shot 51%, scored 33 first-quarter points to get off and running and beat Argentina for the 10th consecutive time since a loss at the 2004 Athens Olympics.

Luis Scola, set to play in the Olympics for a fifth time, scored 16 points in 19 minutes for Argentina. Nicolas Laprovittola scored 13, Facundo Campazzo had 12 and Gabriel Deck added 10.

The U.S. played with only eight members of the Olympic team. Jayson Tatum was held out with right knee soreness and will be day-to-day going forward, USA Basketball said. The Americans also will be without Khris Middleton, Jrue Holiday and Devin Booker until at least this weekend because of the NBA Finals.

The back-to-back losses to start the U.S. team’s stay in Las Vegas raised the possibility that the Americans might lose three in a row with NBA players for the first time.

If those thoughts truly existed, they didn’t last for long.

“Our biggest thing is we have to realize it's not the NBA and Coach Pop keeps re-emphasizing that every single day," Beal said. “It's way more physical. Guys are smarter. These guys have been playing together for five-, 10-plus years. So they have the experience and the chemistry and we're trying to develop that in a short period of time."

It was 15-4 USA before the game was even 3 1/2 minutes old, the lead was as much as 17 later in the opening quarter — the biggest leads for the Americans in the first two games were 10 against Nigeria and 11 against Australia — and the outcome was never really in doubt.

The Americans held a 58-42 lead at the half when Durant beat the buzzer with an 18-footer, a shot that Draymond Green was celebrating before the ball even swished through the net.

“We’re not going to make shots all the time,” Durant said in a televised halftime interview. “But if we continue to guard the way we are, it’ll start to turn for us on offense. ... When we keep the ball in front and we get stops and rebounds, then we pretty much can play with a clean slate on the offensive side of the ball.”

“Today we got better,” Beal said. “Still a lot we can improve on, but we're moving in the right direction.”

Argentina: Campazzo was shaken up late in the first quarter after taking a hard screen, but was able to eventually return to the game. ... Argentina went 0-3 in Las Vegas, losing 87-84 in its opener against Australia on a buzzer-beating 3-pointer by Patty Mills and then falling 94-71 to Nigeria on Monday.

USA: The Americans used all 15 of their available players. ... Kevin Love, who played only 3:01 in the in the Nigeria game and didn’t play against Australia, was among the first-quarter subs on Tuesday. ... Even after the losses to Nigeria and Australia, FanDuel Sportsbook had the Americans as 18.5-point favorites entering the game.

The U.S. Olympic women’s team begins taking the stage in Las Vegas on Wednesday, starting with the WNBA All-Star Game. The U.S. men and women both play Australia on Friday, before the men close their Las Vegas stay on Sunday against Spain and the women play Nigeria. The American teams will fly together to Tokyo on Monday.

Popovich is friends with Hernandez, and the two have spoken often during their stay in Las Vegas, and Hernandez said “today was a special day" as he coached against one of his idols. Argentina assistant coaches Silvio Santander and Maxi Seigorman have joined some of those postgame chats in Vegas with Popovich as well. “Pop is a teacher for everyone. And an inspiration,” Argentine officials wrote on the team’s Twitter account while posting a photo of one of the get-togethers.

Argentina: Expected to play Iran in Tokyo next week before the Olympics.