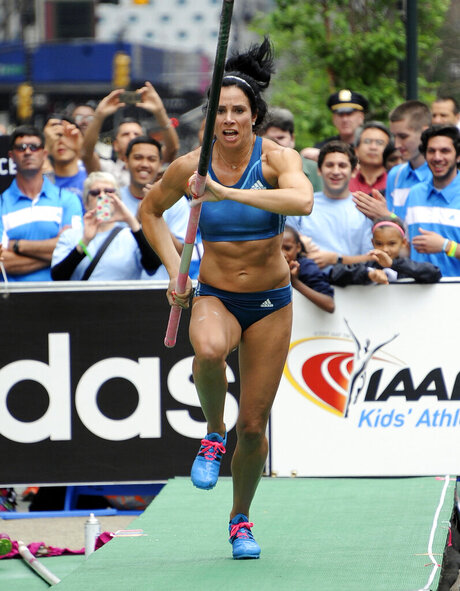 By: JIMMY GOLEN (AP)
BOSTONCopyright 2020 The Associated Press. All rights reserved. This material may not be published, broadcast, rewritten or redistributed.
42.3584-71.0598

BOSTON (AP) — Defending Olympic pole vault champion Jenn Suhr was injury-free, avoided the flu bug this season and the warm weather made it easier to train at her home-made facility in western New York.

So she scouted the area for a meet and found one in Brockport, about 15 miles from her home outside of Rochester.

"When I'm ready to go, it doesn't matter where I jump," Suhr said Tuesday, three days after she broke her own indoor world record by clearing 5.03 meters (16 feet, 6 inches). "Sometimes you can't predict when it's going to happen, you just know that the possibilities are a lot higher that it's going to happen."

Suhr, who turns 34 this week, showed up at the Golden Eagle Multi and Invitational meet that included a field of mostly college athletes at the College of Brockport. The arrival of an Olympic gold (2012) and silver (2008) medalist caused quite a stir among the young vaulters.

"It really was just an inspiring thing for me to see," Suhr said.

After an uneven year in 2015, Suhr said she is off to a good start as she attempts to qualify for the 2016 Rio Olympics. The biggest difference so far is that she hasn't had any injuries or other setbacks derail her training.

Husband and coach Rick Suhr told her that her previous world record of 5.02 meters was beatable.

Although it was an odd place for her to set the record, the mark was quickly verified.

"There were a lot of people measuring that bar, a lot of different angles, a lot of measuring sticks," she said. "They were all 5.03."

Her next event is the New Balance Indoor Grand Prix in Boston on Feb. 14.

This story has been corrected to western New York instead of upstate New York.