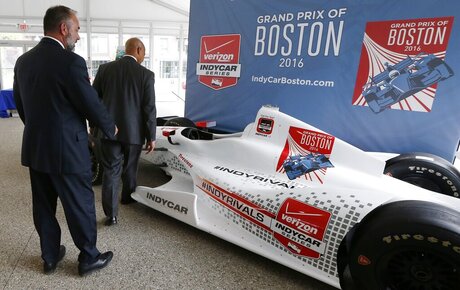 By: JIMMY GOLEN (AP)
BOSTONCopyright 2020 The Associated Press. All rights reserved. This material may not be published, broadcast, rewritten or redistributed.
42.3584-71.0598

BOSTON (AP) — First the 2024 Olympics. Now an IndyCar race is pulling out of Boston before it even began.

Organizers of the Grand Prix of Boston, which had been planned for Labor Day weekend this year and again each year through 2020, told the open wheel circuit Friday that they have scratched plans to bring a race to the city. Like the Olympics before it, the IndyCar race ran into public opposition and a wavering commitment from local leaders.

Mark Miles, the president and CEO of Hulman & Company, which owns the Indianapolis Motor Speedway and the IndyCar circuit, said in an interview with The Associated Press that the promoter "is throwing in the towel."

"It's very disappointing if that's the result," Miles said. "It certainly will be a black eye for the city. I don't blame it on the people of Boston. If it doesn't happen, it will have to do with promoters of sports events being able to make arrangements and rely on assurances given to them."

A spokeswoman for the Grand Prix of Boston did not immediately respond to an email or phone message seeking comment.

The cancellation, which was first reported by The Boston Globe , has a familiar ring to Boston residents, who saw the city nominated by the USOC as the American bidder for the 2024 Summer Olympics. That effort quickly ran into public opposition; shortly after Mayor Marty Walsh said he could not promise that the city would cover any cost overruns, the USOC pulled the bid and decided to put forth Los Angeles instead.

IndyCar officials ran into the same obstacles, first from neighbors that complained about the potential noise and inconvenience and later from government officials unwilling to put public funds at risk.

"As we continued to work with Boston Grand Prix they were unwilling or unable to meet the necessary requirements to hold an event of this size," Patrick Brophy, the city's chief of operations, said in a statement issued Friday night: "The mayor feels strongly in protecting the taxpayers and limiting the impact to residents, and we are not shy that we held them to very high standards."

In a letter sent to IndyCar team owners, Miles said the promoters "concluded that constantly-evolving financial conditions the city was trying to impose on the promoter were unsustainable." A copy of the letter was obtained by the AP on the condition of anonymity from an official who was not authorized to release it.

The IndyCar race was originally announced in May as season-ending event on an 11-turn, 2.25-mile loop laid out over public streets near the South Boston waterfront.

Miles told the AP that IndyCar had been working on a backup plan.

"Nothing is in place or finalized," he said.