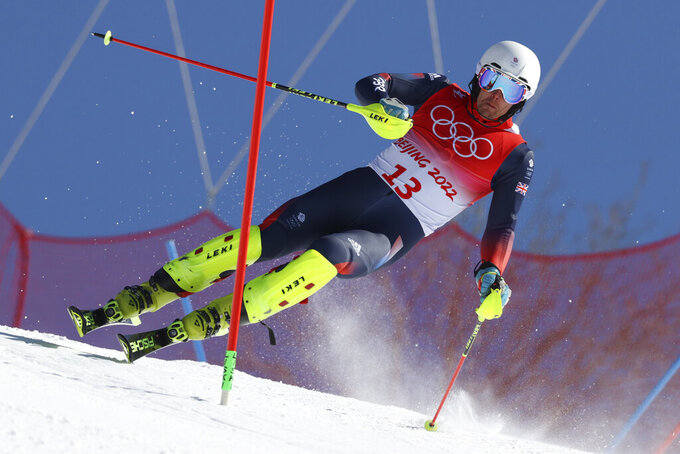 Dave Ryding, of Britain approaches a gate during the first run of the men's slalom at the 2022 Winter Olympics, Wednesday, Feb. 16, 2022, in the Yanqing district of Beijing. (AP Photo/Alessandro Trovati)

BEIJING (AP) — Four years ago, at the age of 20, Clement Noel finished a mere 0.04 seconds from a bronze medal in the Olympic slalom.

Immediately afterward, it bothered him — so close to glory in the first major race of his career. And then, soon enough, that feeling went away. Instead, Noel decided, he should be pleased with having done as well as he did.

At the Beijing Games on Wednesday, now with loftier goals, the French ski racer reached even higher by putting down a blistering second run to win the slalom gold by a huge margin.

Noel moved up from sixth following the first leg and beat first-run leader Johannes Strolz of Austria by 0.61 seconds. His second run was the fastest of the day.

“It was a goal for me to go back to France with a medal,” Noel said. “I knew I can do this but it’s always really difficult to do it in the most important moment.”

Now he has France’s first Olympic gold in Alpine skiing — among men and women — since Antoine Deneriaz won the downhill at the 2006 Turin Games.

Noel has been on the cusp of greatness all season and won the season opening World Cup slalom on home snow in Val d’Isere in December. But the five ensuing slaloms had five different winners.

Only four skiers have even reached the podium more than once in slalom this World Cup season and no one has done it more than twice, leaving no clear favorite for the Olympics.

“It’s not the same as a World Cup race,” Noel said. “Everyone will push hard for the Olympics and I had to do the same without asking myself any questions.”

Slalom is also the most accessible discipline, as evidenced by skiers from 61 different nations entering the Olympic race.

“You are able to train slalom in a lot of places in the world,” said Strolz, who won the gold medal in combined last week. “It’s great for our sport, great when a lot of athletes are competing for the top spots.

“Guys like Marcel Hirscher (the eight-time overall World Cup champion who retired in 2019) really set the bar high and inspired a lot of guys to ski fast,” Strolz said. “At the moment you don’t have a chance but (by) going 100% ... You hold back and you will be punished immediately by the other guys.”

World champion Sebastian Foss-Solevaag of Norway held his position from the first run and picked up the bronze, finishing 0.70 behind for his second Olympic medal after helping Norway to third in the team event in 2018.

With his second medal, Strolz has again matched his father, Hubert, who won a gold in combined and a silver in giant slalom in the same Olympics at the 1988 Calgary Games.

After the win in Val d'Isere, Noel threw away an almost certain victory when he missed the last gate of a slalom in Madonna Di Campiglio, Italy, then again failed to finish the next slalom in Adelboden, too.

“I lost a little bit of confidence at the beginning of January,” Noel said. “I always had mistakes or trouble in second runs.”

Quickly maneuvering his 6-foot-3 (1.91-meter) frame around the blue and red gates, Noel accelerated on the steep finishing pitch where most of the other skiers were more cautious.

The middle section of the Ice River course presented a challenge with a series of bumps, but Noel — who was wearing a shiny gold-colored helmet — used his long legs as shock absorbers to remain smooth.

When he crossed the line, the 24-year-old Noel yelled and let out a series of fist pumps even though there were still five racers to go.

Noel comes from northeastern France — far from the Alps, where most French skiers are born. But his parents liked to ski and he started when he was 2. Then he left his family at 15 to go live with a host family and train in the Alps, joining the Val d’Isere ski club.

Strolz has been an unexpected success at the Beijing Games. Before he won the race in Adelboden last month when Noel went out, the Austrian’s best finish in more than eight years of World Cup racing was 10th place. He was dropped from the Austrian team at the end of last season but worked his way back into the squad recently and made the Olympic team.

Henrik Kristoffersen was the only skier who came close to Noel’s time at the final checkpoint, trailing by just 0.03, but the Norwegian veteran then lost his groove and finished fourth, 0.79 behind.

“I knew that the last pitch was not good,” Kristoffersen said. “I skied too safe and technically bad. Noel deserved the win. He was by far the fastest in the second run.”

For the first run, the temperature at the top of the hill was minus 18.5 degrees Celsius (minus 1 degree Fahrenheit). The freezing conditions made for an icy and slippery slope that caused 34 of the 87 competitors not to finish the opening leg.

It was the final individual event for men in Alpine skiing. Two-time Olympic champion Mikaela Shiffrin is aiming for her first medal of the Beijing Games in the women’s combined on Thursday. The team event on Saturday concludes the program.