Against the odds: Kamminga has a plan to upset Peaty 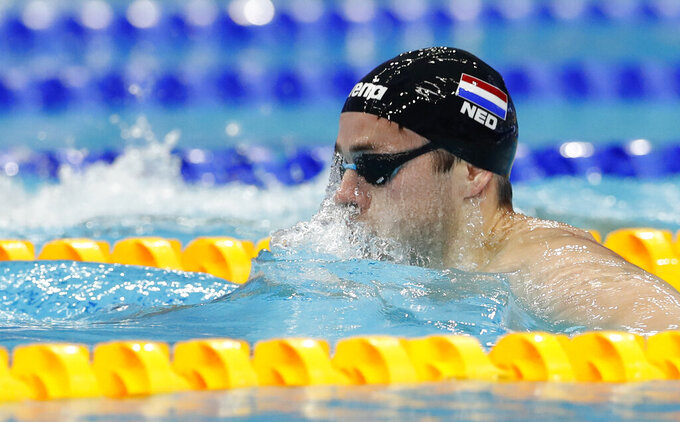 FILE - In this May 19, 2021, file photo, Arno Kamminga, of the Netherlands, competes during the men's 200-meters breaststroke preliminaries at the European Aquatics Championships in Duna Arena in Budapest, Hungary. Kamminga says he has the tactics to beat the most heavily favored swimmer at the Olympics: Adam Peaty. In May, Kamminga became the only man besides Peaty to break the 58-second barrier when he clocked 57.90 at the Dutch trials. (AP Photo/Petr David Josek, File)

TOKYO (AP) — It’s considered the surest gold in the pool. A virtual lock.

Bookmakers worldwide have installed Adam Peaty as the biggest favorite to win a gold medal in swimming — among both men and women — at the Tokyo Olympics.

Unsung Dutch challenger Arno Kamminga, however, is out to beat the odds in the 100-meter breaststroke.

In May, Kamminga became the only man besides Peaty to break the 58-second barrier when he clocked 57.90 at the Dutch trials. While that’s still more than a second slower than Peaty’s world record of 56.88, Kamminga saw reason for hope when he lost to Peaty weeks later at the European Championships.

“When I raced him in Budapest I saw that he is a bit faster on the first 50 but my turn is much better and the race really starts after the first 50 and I’m just going to grind my way on the second 50 and try to beat him,” Kamminga told The Associated Press in a recent interview.

While the Euros were held during a period of intense training for both men, Peaty led Kamminga by a comfortable 0.37 seconds at the turn but was only 0.07 seconds faster than the Dutchman in the second lap.

Finishing within half a second of Peaty was already an accomplishment that few swimmers have achieved in recent years. But Kamminga wants more.

“I know I can swim 57 again there,” Kamminga said of the Tokyo Games. “It’s going to be incredibly difficult. (Peaty) has been No. 1 in the world for so many years now. He’s still (far) ahead but I’ll just keep chipping away on my time and then we’ll see what that means.”

Peaty is listed as a 1-10 favorite to defend his gold medal in the 100 breaststroke from the 2016 Rio de Janeiro Games, according to FanDuel Sportsbook. In other words, the Briton is being given a 90% chance of winning.

After all, since breaking Cameron van der Burgh’s world record in 2015, Peaty has lowered his mark four times and he owns the 16 fastest swims ever in the event.

“He’s just really professional,” Kamminga said. “It doesn’t matter if there’s someone close to him or not; he just trains to be faster and better and I think that’s what makes him really special.”

Unlike Peaty, whose only individual event at the Olympics is the 100, Kamminga is also a contender in the 200 breaststroke, where he holds the third-fastest qualifying time of 2:06.85. Only Zac Stubblety-Cook of Australia and Shoma Sato of Japan enter with faster times.

“That race is even closer. A lot of guys swimming 2:06 right now,” Kamminga said. “It’s going to be really close.”

In the 100, other podium contenders include Michael Andrew of the United States and Nicolò Martinenghi of Italy.

Heats in the 100 breaststroke will be held in the opening swimming session on Saturday, with the final scheduled for Monday.

“I’m going to try to race with Peaty. Of course he is a bit faster still. But I’ll just try to close the gap,” Kamminga said. “And now also other guys are coming to the 58-lows, so it’s going to be a really interesting race. A lot of fun.”

“I’m not that long or tall,” he said. “But I always loved the breaststroke. … I’m just happy to be competing with the best of the world.”

One quirk about Kamminga’s pre-race routine that separates him from other competitors: He doesn’t swim before races to warmup.

Whether it works well enough to beat Peaty is still to be seen.