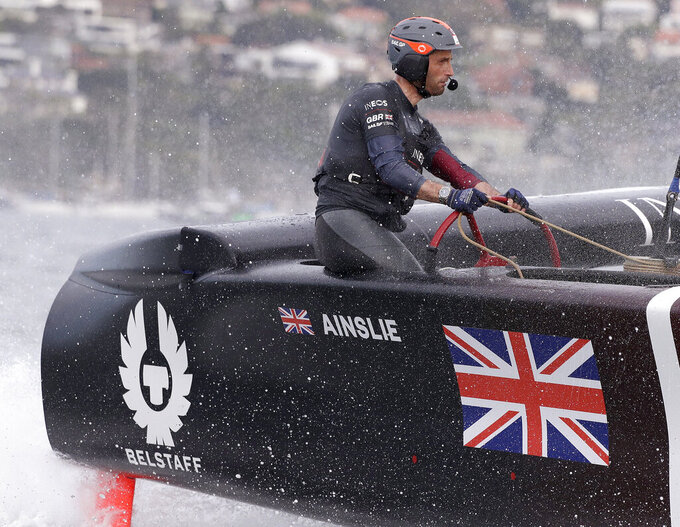 FILE - In this Feb. 29, 2020, file photo, skipper Ben Ainslie steers the boat as the British team slows after crossing the finish line in the second fleet race of the SailGP series in Sydney. Britain beat Australia in the final match race. The second regatta in SailGP’s second season will be notable for who’s missing as much as who will be sailing in Taranto, Italy.The biggest absence will be that of Ainslie, who helmed the British team to victory in the podium race in the opening regatta in Bermuda after Tom Slingsby’s defending champion Australian team dominated the fleet racing. (AP Photo/Rick Rycroft, File)

The second regatta in SailGP’s second season will be notable for who’s missing as much as who will be sailing in Taranto, Italy.

The biggest absence will be that of Sir Ben Ainslie, who helmed the British team to victory in the podium race in the opening regatta in Bermuda after Tom Slingsby’s defending champion Australian team dominated the fleet racing. Ainslie will miss the Taranto regatta Saturday and Sunday as well as the stop in his home waters in Plymouth on July 17-18 due to long-standing personal commitments.

Also missing the regattas in Italy and England will be Australian flight controller Jason Waterhouse, who returned home after the Bermuda regatta to begin going through protocols for the Olympics. New Zealand SailGP Team co-leaders Peter Burling and Blair Tuke, who are two-time America’s Cup champions as well as defending Olympic gold medalists in the 49er class, also will miss the Taranto regatta to focus on their Olympic campaign.

Ainslie will be replaced by Paul Goodison, an Olympic gold medalist and three-time Moth world champion who will make his SailGP debut.

Goodison said Ainslie approached him during the America’s Cup earlier this year and asked if he’d be interested in filling in.

“It didn’t take me long to get back to him and say of course I’d be interested,” said Goodison, who was the mainsail trimmer for the New York Yacht Club’s American Magic. “It’s something you watch on TV and when the America’s Cup’s not going on it’s an amazing different style of racing that I’m really excited to get involved with.”

The eight national teams in SailGP use souped-up versions of the foiling, wingsailed 50-foot catamarans that were used in the 2017 America’s Cup in Bermuda. Goodison was with Sweden’s Artemis Racing in that regatta and did some helming as well as trimming the wingsail.

“I think I’m stepping into a really competitive situation,” Goodison said. “The racing’s obviously super close and it’s going to be very difficult, having so little time in these boats to practice. But I have an amazing team behind me and that’s been shown by the results those guys achieved in the last two events, winning, which has been incredible.”

The British team won the originally scheduled opening regatta of Season 2, in February 2020, but that result was voided when the season was postponed because of the coronavirus pandemic.

When the season restarted in late April in Bermuda, Slingsby and the Australians dominated the fleet racing before Ainslie pulled ahead early in the podium race and held on to beat the Aussies and French.

“The challenge is quite tough but I think if it all clicks, then we could be up there with the top guys hopefully duking it out," Goodison said. “A lot of it has to do with how quickly I pick it up and how quickly I jell into the team because with only two or three days' actual practicing in these boats, it’s a lot to get your head around in a very short space of time.”

Goodison has had rivalries with Slingsby in the Olympics and with many of the SailGP helmsmen in the Moth, a foiling single-handed boat.

The Australians will replace Waterhouse with Kinley Fowler, a veteran of SailGP and the America’s Cup. Fowler will have limited training at the key position.

The Aussies claimed the $1 million, winner-take-all prize in the inaugural season of 2019. They had a strong showing in the Bermuda regatta until the podium race.

“I’m really proud of how we sailed there,” Slingsby said. “It’s a bit of a bittersweet thing. Obviously, I hate the thought of losing and being beaten in any event, but I think we sailed the best we’ve ever sailed as a team. For me it’s really promising moving into this second season with that as our first event, I’ve got more confidence that I ever have, really, in our team.”

SailGP announced that in addition to the $1 million, winner-take-all prize in the final regatta, it is adding an additional purse of $800,000 to be divided up among teams that have podium finishes at each of the remaining regattas.