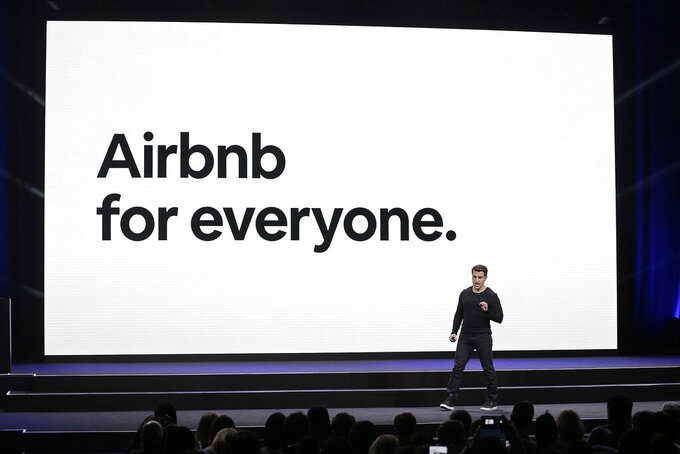 FILE - In this Feb. 22, 2018, file photo, Airbnb CEO Brian Chesky speaks during an event in San Francisco. Airbnb Inc. is being asked to drop its sponsorship connections to 2022 Beijing Winter Olympics by a coalition of 150 human-rights campaigners. The coalition is headed by groups that oppose rights violations in China including widely reported genocide against Muslim Uyghurs in the Xinjiang region. An open letter sent on Tuesday, March 23, 2021 to Chesky argues that Airbnb is trying to drive tourism in China at the expense of Uyghurs and Tibetans who cannot travel freely in the country. (AP Photo/Eric Risberg, File)

Airbnb Inc. is being asked to drop its sponsorship connections to next year’s Beijing’s Winter Olympics by a coalition of 150 human-rights campaigners.

The coalition is headed by groups that oppose rights violations in China including the detention of Muslim Uyghurs in the Xinjiang region.

Airbnb is one of the International Olympic Committee’s leading 15 sponsors. Included in the group are companies like Coca-Cola, Samsung, Visa, Toyota, Alibaba, Panasonic, Intel, and Procter and Gamble.

Airbnb, the home-sharing business, is being targeted because of repeated claims about the “social responsibility" it practices in its business model.

Associated Press received the open letter sent on Tuesday to Airbnb CEO Brian Chesky. The letter argues that Airbnb is trying to drive tourism in China at the expense of Uyghurs and Tibetans who cannot travel freely in the country.

“Airbnb is also glossing over China’s horrifying human rights record and normalizing to the public what is recognized under international law as a deeply restrictive environment," the letter said. "Airbnb should not be encouraging a wider tourist industry to be supported and allowed to flourish at the expense of Uyghur and Tibetan rights.”

The top 15 sponsors paid the IOC about $1 billion in cash or services in the last complete, four-year Olympic cycle, to be associated with the games. Airbnb signed up in November of 2019.

Rights groups are trying to pressure IOC sponsors and are pushing for a diplomatic boycott of the games — or even a hard boycott — to call attention to alleged abuses against Uyghurs, Tibetans, and residents of Hong Kong.

“China firmly rejects the politicization of sports and opposes using human rights issues to interfere in other countries’ internal affairs,” foreign ministry spokesman Zhao Lijian said earlier this month. He said an effort at a boycott “is doomed to failure.”

Rights groups have met with the IOC and have been told the Olympic body must stay politically “neutral.” They have been told by the IOC that China has given “assurances” about human rights conditions.

Activists say the IOC has declined to make the documents public, which makes it impossible to know what has been promised and if China is living up to its pledge.

Mikaela Shiffrin, a two-time Olympic gold-medal skier, spelled out the dilemma for athletes in a recent interview on CNN.

“You certainly don’t want to be put in the position of having to choose between human rights like morality versus being able to do your job, which on the other hand can bring light to some issues or can actually bring hope to the world at a very difficult time,” she said.