Americans on many teams as softball returns to Olympics 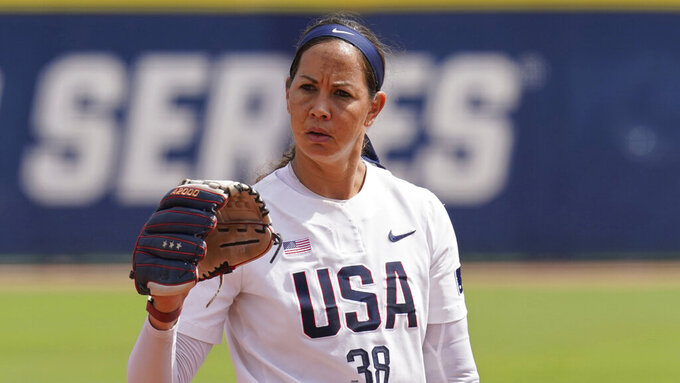 Ken Eriksen predicts tight competition in softball as the sport returns to the Olympics.

“Over the last probably 16 years you’ve seen the world catch up in softball because of the opportunities that USA Softball provided in the teaching and the clinics overseas, but also the colleges started to recruit some really good athletes overseas and develop them,” the U.S. coach said. “And then the rules have been relaxed in respect of do you have to be a 100% citizen, whatever that means, in quotations, of a country that’s playing. And so we are going to be playing against a lot of citizens of the United States that happen to be on Italy, that happen to be of Mexico, that happen to be of Canada.”

Seventeen of the 19 players currently on Mexico’s roster are listed on the team’s website as living in the United States.

Infielder Kelsey Harshman, who was born in Tucson, Arizona, is part of a Canada team filled with U.S. college veterans that include Joey Lye, who quit as Bucknell’s coach to compete for the Olympic team.

“And so that’s where those countries have caught up quite a bit,” said Eriksen, the head coach since 2011 after nine years as an assistant. “Australia has a great developmental program and Japan, a very disciplined and structured organization. So this will be an Olympics unlike any other. I think everybody right now is not that farly separated as they used to be.”

The technological revolution that has altered Major League Baseball also has impacted Olympic softball. Eriksen sees that both with South Florida, where he has been coach since 1996, and the U.S.

“We play Australia and we play Japan and we play Canada and Mexico -- a lot. So we have pretty good data and the analytics on teams that we play,” Eriksen said.

Osterman started and Abbott relieved her in the sixth inning of the 2008 gold medal game, a 3-1 loss to Japan that ended the Americans’ 22-game, eight-year Olympic winning streak.

Eriksen said part of their jobs are to steady the rest of the team, to tell them: “Try not to get stars in your eyes of what’s going on around you, and at the same time, understand that it’s just another tournament, just happens to have five rings on it, but it’s still another tournament and you’re going to play softball and try to win the moments instead of trying to win the medals.”

Among the younger Americans are Rachel Garcia, a 24-year-old right-hander pitcher and infielder; Dejah Mulipola, a 23-year-old catcher; and Bubba Nickles, a 23-year-old utility player.

First and second place play for gold medal on July 27, when third and fourth meet for the bronze.

Softball and baseball are being dropped again from the 2024 Paris Olympics but appear likely to return from for the 2028 Los Angeles Games.