AP Exclusive: 70% of US Olympic sports applied for PPP funds 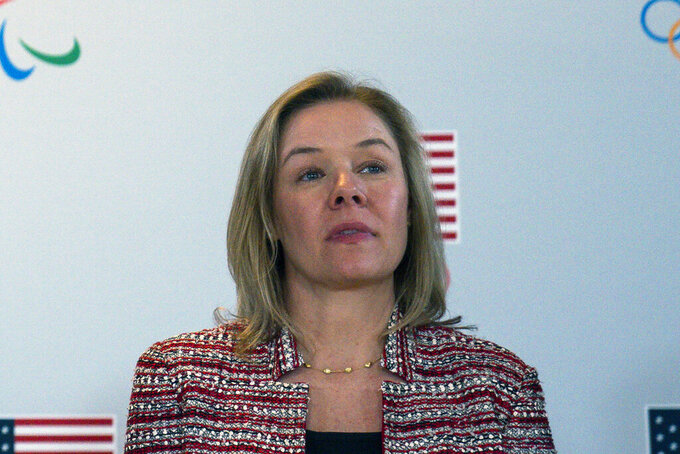 FILE - In this Feb. 18, 2020, file photo, United States Olympic and Paralympic Committee CEO Sarah Hirshland listens as President Donald Trump speaks during a briefing with the U.S. Olympic and Paralympic Committee and Los Angeles 2028 organizers in Beverly Hills, Calif. At least 70% of U.S. Olympic sports organizations have applied for government loans in the wake of the coronavirus pandemic, a chilling figure that underscores the frailties embedded within the world’s most dominant Olympic sports system. (AP Photo/Evan Vucci, File)

DENVER (AP) — At least 70 percent of U.S. Olympic sports organizations have applied for government funds during the coronavirus pandemic, a stark financial reality that underscores the frailties within the world’s most dominant Olympic sports system.

The Associated Press surveyed 44 of the country's national governing bodies (NGBs) — the organizations charged with operating programs from the grassroots through the Olympic levels in sports that run the gamut from badminton to basketball.

All but four of the 36 NGBs that responded said they had applied for assistance from the Paycheck Protection Program. Not all the organizations revealed how much they received, but those who did have been approved for a cumulative total of about $12 million.

Beginning next July, when the delayed Summer Olympics are scheduled to start, U.S. NGBs will send a total of around 1,150 athletes to two Olympics and two Paralympics over the span of seven months. While Mikaela Shiffrin, Noah Lyles and the U.S. basketball teams are on solid financial footing because of their star power and marketability, the U.S. will depend on dozens of lesser-known athletes to dominate the medals table in Tokyo and at the Winter Games in Beijing. It puts the U.S. Olympic and Paralympic Committee and the NGBs on an urgent track to fund all the potential medalists, many of whom haven't been able to train properly for months.

“There’s a very, very real and dire financial situation in sport,” said Sarah Hirshland, the CEO of the USOPC, which oversees the NGBs. “And certainly, the sports organizations we work with closely are feeling revenue pain. And it’s immediate.”

The results of the survey were eye-opening, not only because of the sheer number of NGBs that applied but also because the request for federal money counters the long-held and distinctly American tradition of not using taxpayer money to pursue Olympic glory.

Sports federations in most other countries are buttressed by government financial assistance. The U.S. team, which has amassed a world-leading 653 medals in Summer and Winter games since 2000, relies on broadcast fees, sponsorships, charitable donations and revenue from programming and memberships.

But without the revenue generated by normal day-to-day business — to say nothing of an NBC cash infusion of at least $170 million that would’ve come into the USOPC coffers this year had the Tokyo Games not been postponed — the financial model of the U.S. Olympic sports system is imperiled.

Last month, Hirshland said the USOPC board was aiming to trim this year’s expenses by as much as 20%. It has committed to sparing the NGBs from the cutting block for 2020, but also warned that a full cancellation of the Olympics – a possibility not being ruled out – would be “devastating” for U.S. sports.

The level to which NGBs rely on USOPC funding varies, based largely on their sizes. Even without any USOPC-related cuts in 2020, some of these organizations are teetering on the edge of financial solvency -- missing millions in revenue from events, membership dues, clinics and other fee-based operations that keep organizations and their sports, running. A survey earlier this year estimated they would endure a collective revenue shortfall of $121 million from February through June because of COVID-19-related shutdowns.

“We all are exposed, but to be really candid, it’s probably what it should be,” said Max Cobb, the president of US Biathlon, who also leads the NGB Council in the U.S. “We’re all nonprofit organizations. We put all the revenues back into our sports programs. In only a few cases have NGBs been able to develop a significant contingency fund.”

A number of NGBs didn’t divulge the full details of their requests. Those that did received amounts ranging from $2.5 million (US Ski and Snowboard) down to $75,000 (USA Badminton).

A plurality of those who responded received loans in the mid-six figures. Those amounts reflect the modest sizes of the organizations, many of which have fewer than a dozen employees who are responsible for all aspects of their sports, from nurturing Olympic dreams to tending to the grassroots tentacles that grow in towns and cities across the country and, eventually, produce Olympians.

--USA Cycling, one of the first NGBs to announce it was cutting staff, did not give a dollar amount but said it received enough from the PPP to cover four weeks of staffing and overhead costs.

--USA Swimming received $1.6 million to cover payroll. That NGB is reliant largely on membership-related fees and doesn’t expect to know the full impact of COVID-19 until the fall, when the bulk of its membership renewals come up.

--USA Gymnastics made an undisclosed number of furloughs and cut pay, but because it is in bankruptcy in the aftermath of the Larry Nassar sex-abuse case, it was not eligible for the federal program.

The USOPC, always wary of asking the government for cash, directed NGBs to look into securing funds from the government program. All efforts, Hirshland said, have been geared toward “supporting sports at a community level and supporting the (grassroots) pipeline” that leads to elite sports.

The push for government help in Olympic circles is part of a larger debate as to whether sports should be going after this money at all, given the massive devastation in the economy. The Los Angeles Lakers received a $4.6 million loan but gave it back after a public backlash.

Olympic organizations don't have the huge, long-term TV and sponsorship deals that make pro teams and leagues profitable. Annual revenue for an average NBA team in 2018-19 was $292 million. Only three NGBs cleared more than $50 million in 2018.