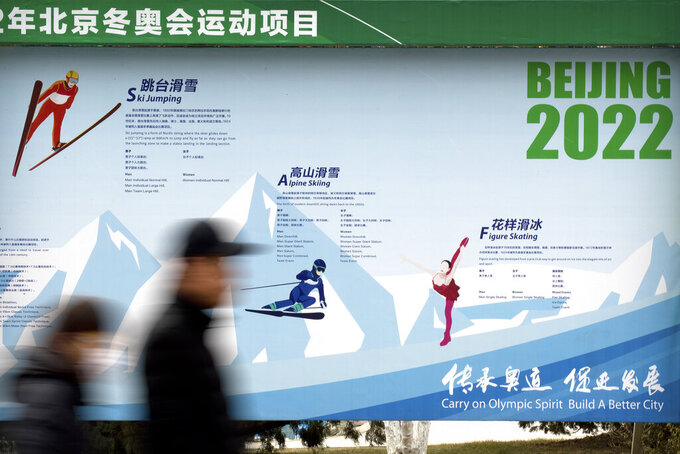 FILE - In this Feb. 6, 2019, file photo, people walk past a display introducing winter sporting events for the upcoming 2022 Beijing Winter Olympics at a temple fair at Longtan Park in Beijing. Groups alleging human-rights abuses in China are calling for a full boycott of the Beijing Olympics, which is sure to ratchet up pressure on the International Olympic Committee, athletes, sponsors, and sports federations. A coalition of activists representing Uyghurs, Tibetans, residents of Hong Kong and others, issued a statement Monday, May 17, 2021 calling for the “full boycott,” eschewing lesser measures like “diplomatic boycotts" and negotiations with the IOC or China. (AP Photo/Mark Schiefelbein, File)

Groups alleging human-rights abuses against minorities in China are calling for a full-blown boycott of the 2022 Winter Olympics in Beijing, a move likely to ratchet up pressure on the International Olympic Committee, athletes, sponsors and sports federations.

A coalition representing Uyghurs, Tibetans, residents of Hong Kong and others issued a statement Monday calling for the boycott, eschewing lesser measures that had been floated like “diplomatic boycotts" and further negotiations with the IOC or China.

“The time for talking with the IOC is over,” Lhadon Tethong of the Tibet Action Institute said in an exclusive interview with The Associated Press. “This cannot be games as usual or business as usual; not for the IOC and not for the international community.”

The Beijing Games are set to open on Feb. 4, 2022, just six months after the postponed Summer Olympics in Tokyo are to end.

Rights groups have met several times in the last year with the IOC, asking that the games be removed from China. A key member in those talks was Zumretay Arkin of the World Uyghur Congress.

Tethong, herself, was detained and deported from China in 2007 — a year before the Beijing Summer Olympics — for leading a campaign for Tibet.

“The situation where we are now is demonstrably worse that it was then,” Tethong said, pointing out that the IOC said the 2008 Olympics would improve human rights in China. “If the games go ahead, then Beijing gets the international seal of approval for what they are doing.”

The push for a boycott comes a day before a joint hearing in the U.S. Congress focusing on the Beijing Olympics and China's human-rights record, and just days after the United States Olympic and Paralympic Committee said boycotts are ineffective and only hurt athletes.

“People have worked to engage with the IOC in good faith to have them understand the issues directly from the mouths of those most impacted — the Uyghurs at the top of that list and the Tibetans and others," Tethong said. “It’s clear the IOC is completely uninterested in what the real impacts on the ground for people are.”

The IOC has repeatedly said it must be “neutral" and stay out of politics. The Switzerland-based body is essentially a sports business, deriving about 75% of its income from selling broadcast rights, and 18% more from sponsors. It also has observer status at the United Nations.

“We are not a super-world government,” IOC President Thomas Bach said recently.

China's foreign ministry has criticized “the politicization of sports” and has said any boycott is “doomed to failure.” China has denied accusations of genocide against the Uyghur people.

A recent U.S. State Department report stated explicitly that “genocide and crimes against humanity” have taken place in the past year against Muslim Uyghurs and other minorities in the western region of Xinjiang.

Tethong said she knows some athletes may be opposed. But she said others, who gained traction from Black Lives Matter movement, may become allies. She acknowledged this as a “gloves-off" moment.

“There are obviously a lot of people who are concerned about the athletes and their lifelong work,” Tethong said. “But in the end it’s the IOC that has put them in this position and should be held accountable.”

American skier Mikaela Shiffrin, a two-time Olympic gold medalist, spelled out the dilemma for athletes in a recent interview on CNN.

“You certainly don’t want to be put in the position of having to choose between human rights like morality versus being able to do your job," she said.

Tethong suggested coalition members might lobby the IOC's top 15 sponsors, American network NBC, which generates about 40% of all IOC revenue, sports federations, civil society groups “and anyone that will listen.”

Activists have already singled out IOC sponsor Airbnb for attention.

“First is the moral question,” Tethong said. “Is it OK to host an international goodwill sporting event such as the Olympic Games while the host nation is committing genocide just beyond the stands?"

In meetings with the IOC, activists say they have asked to see documents in which China has given “assurances” about human rights conditions. Activists say the IOC has not produced the documents.

The IOC included human rights requirements several years ago in the host city contract for the 2024 Paris Olympics, but it did not include those guidelines — the United Nations Guiding Principles on Business and Human Rights — for Beijing. Paris is the first Olympics to contain the standards, long pushed for by human rights groups.

At the meeting, Britain’s U.N. Ambassador, Barbara Woodward, called the situation in Xinjiang “one of the worst human rights crises of our time.”

“The evidence points to a program of repression of specific ethnic groups," Woodward said. "Expressions of religion have been criminalized and Uyghur language and culture are discriminated against systematically and at scale.”