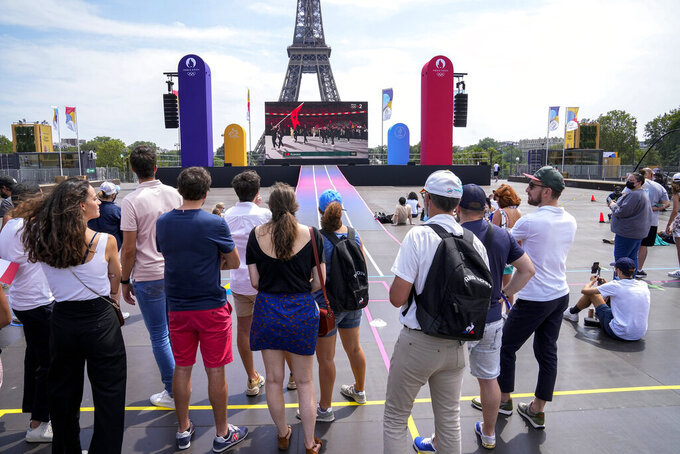 People watch on a giant screen the opening ceremony of the 2020 Summer Olympics in Tokyo, at the Trocadero gardens next to the Eiffel Tower in Paris, Friday, July 23, 2021. (AP Photo/Michel Euler)

TOKYO (AP) — Dropping into mostly-empty venues, where only athletes provide the sporting soul and spirit, French sports minister Jean-Michel Blanquer observed the type of Olympics the world will be yearning to leave behind.

There’s only three years until Paris gets its turn to host the Games.

“We are in such a special moment in historical terms that it’s very important to renew the Olympic Games,” Blanquer told The Associated Press, “and to show that humanity needs this kind of moment and this kind of gathering of people.”

There’s an admiration from Blanquer at how Japan has coped with the adversities and challenges posed by the pandemic to stage the Tokyo Olympics, albeit a year late with ongoing coronavirus restrictions.

“It’s very interesting,” he said, “to see how you manage to organize in a very difficult context.”

Domestic opposition to the excesses of hosting an Olympics is nothing new, but it’s been magnified in Tokyo by locals being shut out of the costly venues their taxes helped to fund. Blanquer is braced for growing dissent in France, too, which he hopes to quell by accentuating the worth of the extravaganza.

“Sports shouldn’t be a topic of division. It’s true that sometimes Olympic Games are a topic of debate, which is normal in democracies,” he said. “So it’s our aim to give proof of the goodness of the Olympic Games for the country.”

Blanquer hopes that will be achieved by pointing to the role sports can play in the health of the nation, particularly through the youth, which is part of his government portfolio along with education.

The aim is also to connecting the Olympics more to the local population at a time Blanquer hopes coronavirus restrictions will be long gone. From an opening ceremony in Tokyo closed to spectators, Paris envisions its curtain-raising event to spread beyond the main stadium to feature monuments across the capital and eye-catching locations including the River Seine.

“We are very proud in France to have reinvented (the Olympics) thanks to Baron de Coubertin more than a century ago,” Blanquer said. “It is very important for humanity at this moment to be able to leave a kind of new status to sport.

“It’s even more true now with this crisis and with the need to move. The need to have good health. The need to be together. That’s why Olympic Games are more necessary than ever.”

Blanquer also will be looking to secure more funding from President Emmanuel Macron, hoping to use that money to help France increase its medal count after finishing seventh in the medal standings at the 2012 and 2016 Olympics.

Blanquer has observed how investment in athletes has paid off across the English Channel with Britain rising to third place at the 2012 London Games and moving a spot higher at the 2016 Rio de Janeiro Games.

“It’s inspiring to see how (the British) have done that,” he said. “So we have watched the British example and of course, for example, for these games, we have put more money.”

“We have a specific preparations to have more medals in Paris,” Blanquer said. “Our ambition is to be among the first five nations in the world in terms of medals.”

What will be fascinating is how Paris deals with any of the personnel challenges faced by Japanese organizers.

The director of the opening ceremony in Tokyo was fired on the eve of the event last week because of a Holocaust joke he made during a comedy show in 1998. The months building up to the Games had already seen the organizing committee president forced to quit following sexist remarks. The creative director for the opening and closing ceremonies stepped down after suggesting an actress should dress as a pig.

While not wanting to discuss those cases directly, Blanquer points to being more forgiving of transgressions as he looks ahead to being part of the 2024 Olympic organization.

"Very often you see that people who are in this game — one day or another day, they come to fault, to make something wrong. So we have to be more humble, more open minded about the fact that we are not perfect."