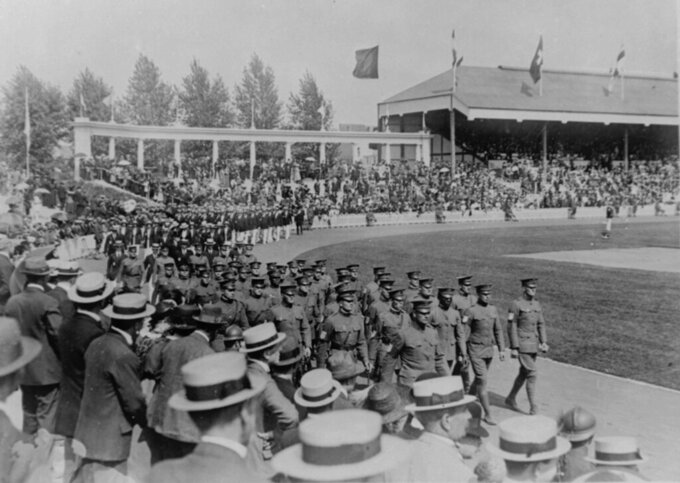 EDITORS — With the Tokyo Olympics postponed for a year because of the coronavirus pandemic, The Associated Press is looking back at the history of the Summer Games. This story was published in the St. Albans (Vermont) Daily Messenger newspaper on August 23, 1920. The story is published as it appears in the newspaper, using the contemporary style and any published errors. The marathon winner was Hannes Kolehmainen, not Kolehminen, and his challenger in the race was Chris Gitsham, not Charles Gitsham.

7th Olympic Ends With U.S. Athletes Far In The Lead

Antwerp, Aug. 23. — (By The Associated Press). — The Olympic athletic events in the Stadium closed this afternoon with the American athletes so far in the lead in the point scoring that they were the winners by a large margin.

The closing contests were held in the rain with only a handful of spectators present.

Antwerp, Aug. 23. — (By The Associated Press). — Hannes Kolehminen, representing Finland and holder of several American distance records and championships, won the seventh Olympic marathon. He showed wonderful endurance and covered the distance, 25 miles, 385 yards, in the remarkable time of 2 hours, 32 minutes, 35.4/5 seconds, through mud and rain. This broke the old record by more than four minutes.

The eight years that have passed since Kolehmainen won three championships at the Stockholm Olympics seem to have passed lightly over his head and to have increased, rather than diminished, his stamina and speed. Through almost the entire distance Kolehmainen was attended closely by Charles Gitsham, the South African, who ran second in the marathon of 1912, but he wore him down after a long shoulder-to-shoulder duel well ahead of the rest of the field in the latter part of the great contest. The hard pace was too much for Gitsham, who fell back after a game struggle to hold second, being passed by Lossman, the Esthonian, and many of the others with the stadium almost in sight.

Lossman made a determined effort to overhaul the Finn leader, but was unable to quite to do the trick, although only a few seconds separated them at the end.

While not particularly prominent in the marathon, the Americans did excellently earlier in the track race, winning two relay races and taking third and fourth in the discus throw. The four American sprinters, Charles W. Paddock of Los Angeles, J.V. Scholz of the University of Missouri, Loren Murchison of New York and M.M. Kirksey of San Francisco, running in that order in the 400-meter relay, established a new world record, winning the event in 42 1/5 seconds, two-fifths of a second faster than the time made by the German winners at Stockholm in 1912.

Antwerp, Aug 23 — Duke Kahanamoku, of the American Swimming team, broke his own olympic record of minute 3 2/5 seconds by three-fifths of a second in the qualifying heat of the 100 meters free style swim. His time was 1 minute 1 4/5 seconds.

In the same event P. Kealeha, of Honolulu, won his heat in one minute, two seconds. Norman Ross and W.W. Harris, Jr., also were victorious in their heats and qualified.

The record broken by Kahanamoku was made by him in the Stockholm Games in 1912.

In his heat Kealeha, in addition to breaking the Olympic record, smashed the world's record, his time being one minute and 14 seconds. Both Kegeris and Kruger also broke the Olympic record of one minute 20 4/5 seconds made by H.J. Hebner of the American team in Stockholm in 1912.