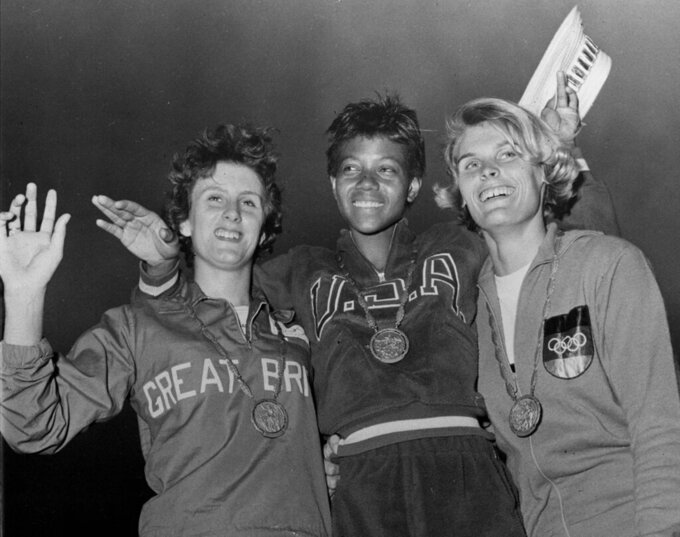 EDITOR’S NOTE — With the Tokyo Olympics postponed for a year due to the coronavirus pandemic, The Associated Press is looking back at the history of Summer Games. This story was transmitted from Rome during the 1960 Olympics of Wilma Rudolph’s win in the 200 meters for her second of three gold medals at the Summer Games track event. The story is reprinted here as it ran in The Lima Citizen (Lima, Ohio) on Sept. 6 using the contemporary style terminology and including any published errors.

By WILL GRIMSLEY, AP Sports Writer

The track and field heroine of the 17th Olympic Games is a shy, frail and almost sickly Tennessee girl who never walked until she was eight years old.

As a baby, Wilma Rudolph was stricken with a form of polio which rendered her limbs helpless. Every week her mother wrapped the whining infant in a blanket and took her by bus 45 mile from Clarksville, Tenn., to Nashville for treatment.

Today she is the fastest woman runner in the world_acclaimed as another in a line of great Olympic champions which includes the late Babe Didrickson, Fanny Blankers-Koen and Bety Cuthberg.

The tall, leggy Tennessee girl won her second gold medal Monday, capturing the 200-meter race in 24 seconds flat on a slow track. Previously she had won the 100 in a phenomenal 11 seconds. On Thursday, she anchors three of her Negro teammates from Tennessee A. and I. College in the spring relay for a probable third.

Until Wilma did it, no American ever won the women's 200. She became the first double gold medalist for the United States in women's track and field since the immortal Didrickson won the hurdles and javelin in 1932.

She is the darling of the Rome games_surrounded by admiring fans and autograph-seekers, pursued by the press and adored by an Italian populace which has equal fascination for a good athlete and a striking woman.

Wilma has wowed them all, but none perhaps more than her coach, big and gruff Edward Temple of Tennessee A. and I., who also is coach of the Olympic women's team.

“This girl has limitless potential,” says Temple. “She has height (5-11), good legs, natural speed, a dogged determination and, best of all, perfect relaxation.”

“There's not a nerve in her body, she's almost lazy. She often goes to sleep between semifinal and final runs. She can go to sleep on the rubbing table.”