Aussie sailor could be going for cousin's job on SailGP boat 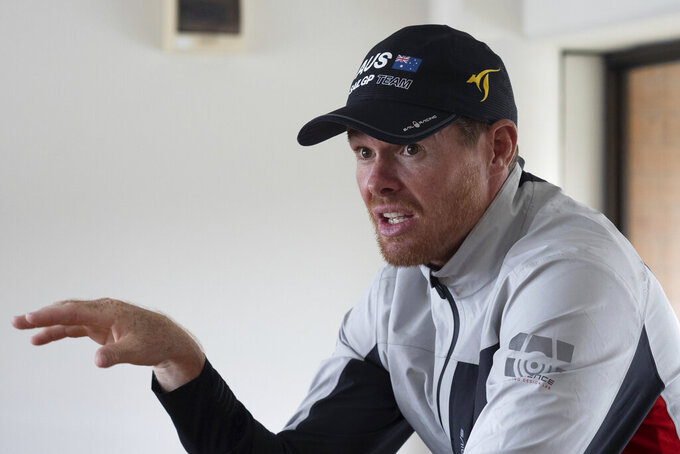 This photo provided by SailGP shows Australia SailGP skipper Tom Slingsby in Sydney, Australia on Feb. 6, 2021. The women sailed WASZP one-person foiling dinghies, giving Slingsby the chance to assess their potential ability on the 50-foot foiling catamarans used in SailGP. Slingsby said. "There's a lot of training ahead. We've seen some amazing male sailors who have been dropped out of SailGP because they just couldn't keep up. By no means is it going to be easy, but I just think it's great to give them the opportunity for them to come and live and train with team and see what it's all about and then if they're good enough, they'll make it." (Beau Outteridge/SailGP via AP)

Lisa Darmanin is eager to break the glass ceiling on the Australia SailGP Team, even if it means dislodging her cousin and Olympic sailing partner, Jason Waterhouse.

Darmanin was one of three top Aussie women sailors who participated in an invitational camp recently in Sydney as part of a new program aimed at accelerating the inclusion of female athletes in SailGP, the global league co-founded by New Zealander Russell Coutts and tech titan Larry Ellison.

Darmanin said she’d be interested in being the flight controller or wing trimmer with the Australian team. The Aussies dominated the inaugural season in 2019, including a victory in the $1 million winner-take-all season finale.

“We’ve already had that discussion,” Darmanin said in an interview. “I said, ‘I don’t want to take your job, mate.’ He said, ‘Well, if it’s not you, it could be somebody else, so definitely give it a go.’

“That’s the cool thing,” she added. “I’ve learned a lot about the F-50 from Jason, just because I’m interested in the technology. It’s the pinnacle of sailing. He a fantastic teacher. Yeah, it would be tough for him, but he has had experience in the America’s Cup; he had a bit of a coaching role there. He just wants to see the Australian team do well. He’ll do whatever’s best for the team. It’ll be interesting, but he’s cool about it.”

Darmanin and Waterhouse won the ISAF Youth Worlds in 2009 in a Hobie 16 and later moved into the Nacra 17. She pointed out that all their successes have been shared.

“He’s just had a few opportunities that I haven’t had, like Youth America’s Cup, the Extreme 40 Series, which then gave him the door opening to get into the America’s Cup, which gave him the door to get into SailGP,” she said. “It’s that one door that opens, opens the rest. For me, none of those doors has opened, so I haven’t had the chance to get any big boat experience, fast boat experience to then get on the SailGP.

“That’s why as a female who’s really passionate about women in sport, I don’t want to have to be mandated. That’s not the way we really want to do things. To be realistic, that’s the only way it’s going to happen. We’re too far behind.”

If Darmanin is given a door, “I hope I kick it down pretty hard,” she said.

Others participating in the camp were Nina Curtis and Natasha Bryant. Mara Stransky and Hayley Outteridge were also selected for the camp but were unable to attend due to COVID-19 border restrictions in Australia.

Outteridge’s brother, Nathan, is skipper of Japan SailGP Team, as well as an Olympic gold and silver medalist in the 49er class. The Outteridges campaigned in the Nacra 17 for a spot in the delayed Tokyo Games, but Darmanin and Waterhouse were selected to make a return trip to the Olympics.

Curtis also is an Olympic silver medalist and sailed with Team Brunel in the 2017/2018 Volvo Ocean Race, which allows teams to have bigger crews if they add women. Bryant was named the Youth World Champion in 2016 for the 29er class and also recently campaigned for the Olympics in the FX class.

“I think it’s a good thing to open the pathway for women. Unfortunately, they probably haven’t had the opportunities as the men have had in the past,” said Slingsby, who won a gold medal at the 2012 London Olympics and then helped Oracle Team USA win the America’s Cup in 2013 with a stunning comeback.

Slingsby said he’ll likely let the women pick which role they’d like to try out for and then give them plenty of training time. The F-50s are supercharged versions of the cats used in the 2017 America’s Cup in Bermuda.

“They could do it for sure,” Slingsby said. “There’s a lot of training ahead. We’ve seen some amazing male sailors who have been dropped out of SailGP because they just couldn’t keep up. By no means is it going to be easy, but I just think it’s great to give them the opportunity for them to come and live and train with the team and see what it’s all about and then if they’re good enough, they’ll make it.”

Marie Riou was France’s flight controller during the inaugural season and is one of the women being considered for the French team for this season.